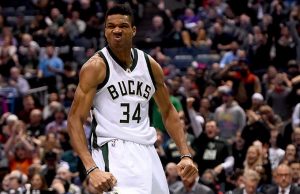 I’ve always enjoyed the Godzilla franchise. When I was young, it was all about the monsters fighting, special effects, and destruction levied upon the landscape. As I got older and delved into the origins, I appreciated the franchise that much more. As with most things in life, though, the journey is cyclical and it’s back to the good old awe-inspiring, destructive force. Which brings me to Giannis Antetokoummpo. All season, I’ve been calling him G, as he’s a straight gangster, and when he balls the F out, it’s been Nuthin’ but a G Thang. There have been moments of O. M. G. But yesterday, everything became crystal clear.

He called Ben Simmons a “f’ing baby” but then Simmons came back and dunked on his head. In addition, Joel Embiid produced a 40-burger and the Sixers defeated the Bucks, 130-125. I felt like I was watching a Godzilla movie in which he had to fight Gigan, Destoroyah, Mothra, and Ghidorah at the same time. Anyways, Gzilla is a freaking beast. Top 5 player over the past seven games. He’s been averaging 30.3 points, 1.1 treys, 13.1 boards, 6.3 dimes, 1 steal, and 1 block while shooting 58% from the field and 82% from the free throw line on a whopping 11.4 attempts! The turnovers are high, but whatever. Now, with Malcolm Brogdon out for a while, Gzilla may be making more appearances down the stretch, as Brogdon had a usage rate in the low-20s. Other teams better hope they have a couple of monsters to negate Gzilla, because he’s coming to wreak havoc.

Played 36 minutes. Middleton has disappointed this season because of two things. 1) Poor shooting efficiency. 2) Fewer minutes. With Brogdon out, it will be interesting to see how Budenholzer plays things.

Top 25 player over the past seven games and top 35 player on the season. The boards and dimes are light, but Lopez has contributed plenty of treys, steals, and blocks. 5th in blocks per game and 3rd in total blocks.

Entered the starting lineup for Brogdon and played 24 minutes. I’d imagine that he’d get more minutes in the future, but when he’s cold like yesterday, Budenholzer has no issue going with the bench.

The dimes have skyrocketed lately (from 2.7 to 6.3 over the past four games), which is a good thing to see. Unfortunately, the points, treys, and rebounds have all come down. In addition, the free throw shooting has been dreadful (46%). He’s been outside the top 200. As the season winds down and LeBron James sits more often, Kuzma should see a bump in usage but I don’t think the fantasy impact will be too substantial.

Played 35 minutes. He’s not going to play the 38 to 40 minutes per game anymore, and he will likely get his “load managed” more often than not as the season winds down, but LeBron still produces when he plays. He did get blocked by Super Mario Hezonja on the final play, but that’s why he’s Super Mario.

Not that Caruso! Alex has been a top 40 player over the past four games in only 22.4 minutes per game. One of those games he received 11 minutes. He’s averaged 11.8 points, 1.3 treys, 3 boards, 2.5 dimes, 2 steals, and 1 block. The percentages have been great and he will likely continue getting significant run down the stretch.

Got the start and played 36 minutes, after missing 12 games due to injury. And Mario ate the mushroom and was Super in his return.

We have no idea what Fizdale will do, but Hezonja has a chance to play significant minutes to conclude the season. If he does, Hezonja can provide points, treys, boards, and steals. Just remember that the magic mushroom doesn’t last forever.

You want to know just how bad the Lakers are on defense? Knox is shooting 36% from the field for the season. He shot 57% yesterday.

Continues to start and played 33 minutes. Since returning, DJ has been a beast on the boards, averaging 13.3 over the past six games. He’s also dishing out 4 dimes per game. The blocks are light, which deserves a Stanley Hudson gif…..

….but the free throw shooting has been over 84%!

Got another start because Dennis Smith Jr. (back) was out again and played 33 minutes. Top 50 player over the past three games. Let us all sing out his name….

Played a team-high 41 minutes. I’ve been writing for a few weeks now that Dotson has been the most dependable Knick. What a world! Over the past seven games, Dotson has averaged 35.8 minutes and 15.4 shot attempts. He will provide points, treys, some boards, and steals. Top 90 player.

The Hornets scored 75 points yesterday. NO MORE BLURBS FOR THEM!!!

Got the start and played 24 minutes. Airplane mode was activated, but there was a tremendous amount of turbulence, which affected the shooting efficiency. With his hops, he should just dunk over everyone.

Continues to start and played 31 minutes. Is it happening? Has it happened already? Bam has started the last 10 games. While the minutes have been erratic, he’s received 31 and 29 minutes of run the past two games. Y’all know my love for Bam, so this development makes me giddy and tingly inside. Spoelstra could flip the script at anytime, so there’s always the risk of a Mt. Whiteside explosion, but I’m thinking it’s Bam time. BAM!

Played 28 minutes off the bench. Since returning from injury five games ago, the 28 minutes was by far the most he’s received. We knew he was going to get back into the starting lineup at some point. That could be happening any day now.

Played 28 minutes off the bench as well. T minus 12 games. Get your popcorn ready. Until then, Wade should ball out, as this is his last hurrah.

Played 37 minutes. As long as Serge Ibaka is out serving his suspension, Gasol is going to get run. He’s the third option on the team, though, so the points won’t be voluminous, but his value will likely come from pulling down boards and dishing out dimes.

Returned and played 31 minutes off the bench after missing 12 games.

Got the start and played 17 minutes because Kyle Lowry (ankle) was out. That is all. I will now replay Linsanity clips over and over all night long.

What’s gotten into Dre and DeAndre Jordan lately from the free throw line? Whatever it is, don’t let it stop!

Is it October? Reggie can pop off from time to time, but more often than not, you’ll be disappointed. The shooting efficiency isn’t great and the counting stats aren’t plentiful. The main negative, though, is the minutes. He’s only averaging 23-24 minutes per game.

Langston Galloway and Luke Kennard both played 28 minutes. Neither did much, but both are getting minutes. Galloway is a trey specialist, while Kennard will provide some boards and dimes with some treys.

Played 25 minutes. Dedmon’s 11th dub-dub of the season. Despite averaging only 25 minutes per game, Dedmon has been a top 40 player over the past five games. The shooting efficiency stinks, but he contributes across the board.

The range is so wide for Trae, as he vacillates between top 20 and top 100 value. It primarily comes down to the shooting efficiency. Anyways, he’s going to be so good. I mean, he’s already so damn good and has shown the improvements we like to see, especially in the turnover department.

Played a team-high 38 minutes. More! I want more, Aaron! I believe in you!

Yuck. For those of you in +/- leagues, Isaac was a +6 last night, despite the awful stat line.

Played 26 minutes off the bench. The answer is no.

Only played 23 minutes. Remember when I said that one of the reasons why I loved Markkanen was because he had that dog in him? Well…..who let the dogs out? He’s really been struggling lately and been outside the top 200 for fantasy. No D stats, poor shooting efficiency, and no boards.

Otto Porter Jr., Robin Lopez, and Kris Dunn all scored 8 points. Outside of the Chinese fans out there, no one is happy with that number.

Played 20 minutes off the bench. Harrison was the “Top Performer” for the Bulls if you looked at the box score on ESPN. That’s all you need to know about that game yesterday.

Played 21 minutes. Giles is going to be a good one, as he can contribute across the board. The passing ability really gets my juices flowing. With that said, I don’t see the Kings giving him a ton of minutes this season. There’s absolutely no reason to push him, so he will likely languish in this 20-21 minute range.

Meow. The #3 player for fantasy over the past six games. KAT has had a usage rate of 37!

Got the start and played 29 minutes because Jeff Teague was out again. Are we sure that Jones is any good?

Played 35 minutes. Tied a career-high in points. For the month of March, Okogie had received 30 minutes of playing time just once. He was also averaging 3.9 shots per game so…..last night’s game was probably an outlier but it does show what Okogie can do. Something to monitor in case a switch was flipped. On a separate note, everytime I hear or say his name, I get hungry. Gogi in Korean is meat.

Played 22 minutes off the bench. The Taj will not die. Cannot die. Shall not die. He will remain a fixture in fantasy for all eternity.

Like a good neighbor, Chris was there to pick up the slack for James Harden. Paul had been struggling with his shot, but over the past three games, he’s been shooting 56% from the field and been a top 15 player.

Harden was questionable to play last night due to a strained neck. Good thing he’s not a giraffe.

Played 28 minutes off the bench. House has played 28 and 35 minutes the past two games and scored 14 and 18 points respectively. An intriguing pickup if you need treys. D’Antoni said that he wanted to play House more, and there could be rest days coming up for many of the Rockets players, so opportunites and playing time could be there.

Played 31 minutes. I don’t know what this means to be honest. Kenneth Faried and Austin Rivers were both DNP’s, so…..shrug emoji. Somenthing to keep an eye on, as minutes are minutes.

The highs are highs, yet the lows are low. There’s still inconsistency in Russell’s game, but he’s still only 23 years old. I fronted on Russell from the get go, but I’ve been impressed with his play. Hopefully, he continues to develop and gets more consistent.

Got the start and played 32 minutes. We saw flashes last night. This could be the beginning of something. Worthy of monitoring for sure.

Played 33 minutes off the bench. The shooting is normally bad, but Carroll will provide tidings of good joy from time to time.

Played 33 minutes. A poor shooting performance, but it happens. Dinwiddie is getting the minutes and jacking up the shots. For the month of March, he’s averaging 14 shots per game. The last three games, he’s hoisted 16, 16, and 17. Minutes and opportunites=fantasy goodies.

I knew he’s been good, but I had no idea he’s been top 15 good over the past five games. Don’t expect much in the way of D, but the percentages are excellent and the treys and boards are plentiful.

Played 34 minutes. Coincidentally, Montrezl has been the #34 player over the past four games. He’s been averaging 2.3 blocks!

Top 50 player over the past six games. Sweet!