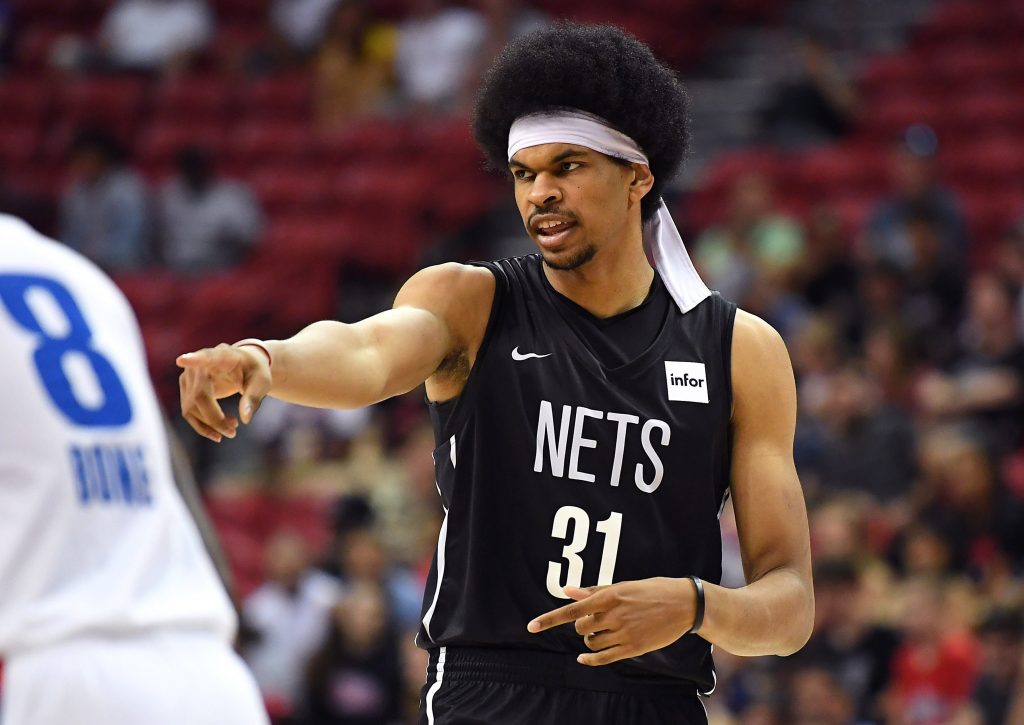 In Brooklyn, the veterans always preferred DeAndre Jordan over him, even though he was better. Now in Cleveland, he’s forced into a timeshare with Andre Drummond and Larry Nance Jr. When will Allen get his due? According to leading armchair psychologists, it was all that pent-up frustration that led to this outburst. In contention for the line of the year so far.

A forgettable line from a top-80 guy on the year. Yeah, Minny is bad. They need KAT back pronto, but this one was winnable even without.

The counting stats are there, but like the rest of the team, Beasley shot poorly. As a team, Minnesota shot less than 40% from the field. Yuck.

Double-doubled on efficient shooting. What more can you ask for, especially from a guy who was seen as a late-round flier at best?

LeBron James had a day. The King is posting top-30 value on the season a quarter of the way through.

No line seems blurb-worthy following LeBron. Harrell was money from the field and contributed defensively–hey, he’s only 0.3 off from averaging a steal and a block per game.

Capela is averaging nearly 15/15 on the year with 2 blocks to boot. One of the premier punt-guard stats guys.

Seven turnovers are really, really unattractive. Kind of puts an asterisk on the night. Still, the rest of the line proves Ice Trae is heating up–he’s returning 3rd overall value in the last two weeks.

Could’ve been a nice all-around line had P.J. not shot so poorly. Salvaged it by contributing a bit of everything.

When all had given up on him…the Monk rose. On top of the scoring outburst, hit the shot to send it to overtime as the Hornets overcame Miami in a close one. The monastery is open, folks.

Jimmy Buckets couldn’t get the game-winner to fall, but he still looked out for his fantasy owners with four steals.

Bam fouled out, yet still played a team-high 39 minutes.

His days as a fantasy contributor are over, but Iggy managed to cobble together something pretty decent in 27 minutes of action.

Came in on a two-way contract and got buckets. 7-11 from the field on his way to 19 points in just 20 minutes played. Probably won’t happen regularly, but nice to see.

I’ve been writing about and watching this guy every week. He’s playing well in a system that’s built around him. He’s probably an All-Star in terms of numbers but is still not a part of the Knicks’ future, in my eyes.

Early foul trouble killed what could’ve been a monster line.

The kid just keeps on delivering. After drawing praise from veterans around the league, he’s showing why. Outplayed Payton and got the minutes to show for it.

Could not miss in the first half. Didn’t do much besides launch threes, though.

Played a team-high 37 minutes. He’s been disappointing this year, and you can blame his FG% for that. Ranks outside the top-100.

He’s going to be very good while Wendell Carter Jr. is out. After that, he will fall off quite dramatically.

Whoa. The young guys stepped up for the Blazers tonight. The extended run likely owes to the fact that Milwaukee was up so much and so early. Still, this is very impressive and Little may be worth a look until the Blazers get some of their wing depth back.

I’m only writing blurbs for Blazers 21-years or younger tonight. Simons had the green light and produced, albeit on 5-15 shooting.

17 points on 6 shots. The bionic deer is what I’m calling Middleton from now on.

Team-high in the plus-minus category, plus he dominated pretty much everywhere else.

Portis is having a really solid year in Milwaukee. Somewhat unreliable for fantasy purposes, as his minutes are sporadic, but he should get 20+ minutes which translates into low-end value.

Barnes has really stepped up the playmaking ability this year, averaging a career-high 3.4 assists a game. Granted that may regress to the mean, but I still think the Kings are just moving the ball a lot this year and that number will stay relatively high.

Holmes is still the big man to own in Sactown. Six blocks! That’s Myles Turner’s music!

What a game. Six turnovers are excusable when you’re doing these kinds of things on a basketball court. Making his case for an All-Star appearance.

Was able to contribute despite shooting the rock poorly. That’s a mark of a good fantasy player.

Zion did it all tonight, raking in the defensive stats as well as doing his usual thing on the offensive end.

6-20 from the field is not pretty. The rest of the line makes it stomach-able.

Honestly, I thought Willy was still in Charlotte. As we knew from his days as a Knick, Willy can score in a hurry. He’s just a defensive sieve.

Don’t get too excited. Let’s see Hart do this a few more times before anyone rushes to the wire. Still great stuff—lucky you if you streamed him hoping for some out of position boards.

Tate has been receiving inconsistent run and probably will continue to split minutes with the likes of Danuel House Jr. and David Nwaba. This is a good indication of what he can do in the years to come, which is contribute in several categories.

The Rockets are 7-3 since trading away their franchise player, and Christian Wood is a big reason why.

John Wall did everything right as the Rockets obliterated the young Thunder squad. To think that a few years ago this was a marquee matchup. Wall is good for top-60 value on the season.

House Jr. had his best line since returning from COVID protocol, showcasing his ability to score while chipping in defensive stats. Could be a source of sneaky production in 12-teamers.

If Big Al was Al Jefferson, then can Al Horford be Old Al? Suits his game better. Old Al’s still got some juice in the tank, so Isaiah Roby may be a trade away from fantasy relevance.

Shai is a top-40 fantasy player on a young, developing team that sucks right now.

In just 15 minutes, Diallo delivered the goods. He’s quickly becoming one of those per-36 darlings, and seems to have a knack for passing the ball.

Ayton grabbed all the boards tonight, and almost fouled out doing so. Still not quite producing at the level owners would’ve hoped for.

Some argue that Porzingis can’t function as the second star on this underperforming Mavs squad. Porzingis tried to shut them up tonight, but unfortunately the Mavs still fell to a Devin Booker three to take the game. It’s rough in Dallas.

The defensive stats were there for Luka so fantasy owners are pleased, but he must be feeling pretty miserable.

This is what folks were looking for out of JRich, as he showed why he’s a highly-regarded asset around the league. Nearly iced the game with two clutch FTs in the fourth.

Clarke is playing well after Memphis faced a string of PPDs. Should still have a chance to prove himself before JJJ gets back.

Another beneficiary of Jaren Jackson Jr. missing time, Tillman had a gem of a line tonight.

Slo-Mo has been good—the question is whether he can maintain this level of production when the Grizz are healthy. I predict a dropoff in scoring and playmaking but a slight bump in steals and blocks.

Memphis went super small, with Jones, Melton, Bane, and Konchar all getting extended run. Jones is by far the best passer of the bunch, with 14 shiny dimes today.

With De’Anthony, he’s rarely Melton hot, and thus the shooting is usually putrid. But he’s a defensive monster.

Will be irrelevant when Valanciunas returns, which should be very soon.

Perfect from the line, double-double, stocks. Top-85 on the season. Also a bright spot in today’s joint stinker from the Spurs.