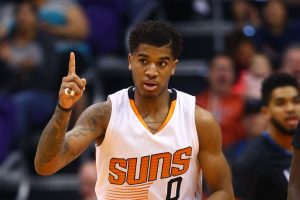 Religion is a touchy subject. There are so many different interpretations and perspectives that man has fought countless wars over it. Kind of makes sense, since we can’t even agree if it’s tomatoe or tomato, or figure out what a catch in football is. And those are things that we can tangibly see with our eyes. An omnipresent entity in the sky? Fugget about it. Personally, I grew up with religion in my life. My parents weren’t devout or anything, but they wanted to expose us to it…..just in case, I guess. I went to a Catholic elementary school (I’m not Catholic), so I experienced that life. As I got older, though, the pendulum swung both ways for me. I got really into it. Read a ton and asked a bunch of questions, but then I started to doubt. Then, I asked a bunch of questions the other way. As it stands, I believe in a higher power, but have issues with organized religion. In a way, that life journey encapsulates my fantasy experience with Marquese Chriss. I’ve always been enamored with his talent and potential. He’s shown me good things in spurts, but I have always had doubts with him because of the inconsistency. So, I guess it makes sense that Chriss played well on the Lord’s Day:

It’s a solid line, but for the lede? Well, he did all that in 18 minutes and there was this:

Chriss probably will not be a consistent fantasy option the rest of the season. He’s just not getting enough minutes. But…..it’s not out of the realm of possibility that he does, and Chriss has shown us in the past that he can get scorching hot. Like with my view of religion, I just can’t completely dismiss the possibility.

Played 42 minutes. Doesn’t shoot many downtowners or dish out dimes, but the boy can shoot. Will also chip in some D stats.

Played 29 minutes, but was ejected in the fourth quarter. He messed around a little too much.

It’s been a tough ride for Prince owners, but those that exhibited patience are being rewarded. He’s been close to a top 50 player over the last few weeks. Prince is only 23 years old and playing in his second year in the NBA. He’s talented, been getting minutes, and hoisting up shots for a bad team. As long as those variables remain, there’s nothing to do but sit back and hope for the best.

With Kent Bazemore sitting, Tyler Dorsey got the start and played 32 minutes.

Should continue to get some spot starts as the season winds down, but he’s an inefficient shooter.

Seriously? Well, Chriss did deliver on the Lord’s Day. I guess the rest of the Plumlees had one powerful prayer session two nights ago.

Top 20 player for fantasy. The only thing he doesn’t do is get his block on.

Tough shooting night all around for the Hornets, but that’s not too shocking, considering the Raptors are 3rd in defensive rating for the season. Batum is a nightly triple-dub threat, so his floor is relatively high. If he shoots well, then ceiling games are accessed.

Played 26 minutes. Is the microwave off the bench for the Hornets. Is getting minutes and hoisting up shots. Brent told you to pick him up. Were you good little grasshoppers?

Played 24 minutes. Looks like a quota game to me. Do just enough to get that double-dub.

Iblocka is back!!!! I still reminisce when Serge would block 3.7 shot a game. Anyways, who’s a bigger black hole? Ibaka or Marreese Speights? I’ve been racking my brain for hours over it.

Played 30 minutes. The minutes and shot attempts are inconsistent, but in the right matchup, he produces. Usually, he will get run when other teams stay big or doesn’t have a stretch 5.

Fred VanElite. All credit goes to one of the guys over at FanVice. I apologize for forgetting who said it. Anyways, he’s getting high-20s of run and contributing across the board.

So solid. Lowry has 10 games with at least 10 rebounds, but only two triple-dubs. Gotta nitpick somewhere.

Malcolm Miller got the start and played 14 minutes. He grabbed one rebound. Norman Powell, the previous starter, played four minutes and grabbed two rebounds, which is an improvement from when he was starting. Raptors fans are praying for the return of OG Anunoby. May the force be with you.

I’m looking at that stat line of thinking of the biatholon. I’m sad the Olympics are over. Anyways, Young played 33 minutes and didn’t do a whole lot. One of these days he will put it all together.

I do have more faith in the Odometer, but he’s just so inconsistent. Not a good thing. Did you know you were driving 85 mph in a 45 mph zone? Uh, officer. My odometer said I was only going 42 mph.

Played 24 minutes. Per 36, Mahinmi would be a monster. Boards and D stats. He will receive 24 minutes of run every once in a while, but usually his range is in the 16-18 vicinity.

Nikola Mirotic got the start at power forward and played 31 minutes.

The Pelicans were playing Emeka Okafor why??? Regardless, whether he starts or comes off the bench, Mirotic will continue being a fantasy asset.

I’m an ungrateful, spoiled little shit now. 23 and 13 with six combined D stats just doesn’t move the meter for me anymore. At least I’m not wondering if AD is hurt. F**k…..did I just jinx him?

I think Jrue figured out a way to suck Justin’s power and insert it into his own body. Have you seen Justin lately? Exactly. Upon further thought, Justin sucked….sucks? Maybe both? Have to conjur up a new theory.

Played 23 minutes. With Okafor out, the front court factory line just moved everyone up a slot. Cheick mate? Diablo? On the Lord’s Day no less? He’s literally the only big guy the Pelicans have on the bench if Okafor is out, so it’s pretty simple. Okafor out – Diallo in. EZ PZ.

Dirk was written off for dead in the preseason. By me. By everyone. He’s a top 60 player for fantasy! Ha! Much respect Dirk. I pay homage and will send a thousand apologies by pigeon courier.

Just dunk on everyone, DSJ! Stop being cute and ruining your shooting percentage.

Played 34 minutes. Why? Maximilian Kleber was getting 30 minutes of run a game earlier in the season. Do not journey down that rabbit hole any further. For your sanity and safety.

Mario with a D brought the goods again, to make both the ladies and men happy.

Who gonna sex Embiid? No one tonight, as G brought the Bucks down from 20 to get the win at home. Who am I kidding? Hey, security. What’s that line outside the stadium for? New Iphone or something? Naw, that’s the line to go sex Joel Embiid.

Played 26 minutes after playing 36 the game before. What year is it?

Played 21 minutes. Per-minute monster. The question I’m starting to ask myself for next year is…..does a healthy Jabari help or hinder G as a fantasy player? What say you?

Forgot who he was for a stretch there, as he was dropping 20 a night. All is right in the world now.

Only two the Hardaway, but able to drop 24 on the night. Getting minutes and shot attempts, but like any foray to the craps table, you know that seven out is right around the corner.

Played 26 minutes and was a +6. Never understood why O’Quinn doesn’t get more run. Per 36, he’s at 14 points, 12 boards, 4 dimes, 1 steal, and 2 blocks. But it’s the Knicks, a team that was giving Ron Baker and Jarrett Jack significant run earlier in the season.

Skal Labissiere got the start at power forward and played 34 minutes.

I’m not a big Skal guy, but can’t deny the minutes and shot attempts. He has potential for sure, so if he continues getting minutes, then he’s a must have.

Big Balls BogBog. Dude is fearless. Will give you 3s, boards, some dimes, but it’s the steals that make him a Bog.

Has been so good over the past couple of weeks, like top 50 good. Fa lalala. La la. La. La.

Right when he was at 99% complete. Now, 86% loading……Seriously, just like my experience with Windows 10 updates.

This is the Crabbe life. Often times, so much work, for so little meat. Players that are dependent upon scoring, especially from the perimeter, and do not contribute much in the periphery categories are prone to these kind of nights more often than not.

Look who’s back as well. Sucked up most of D’angelo’s minutes, so this is probably an outlier game. With that said, someone to keep an eye on, as he did have moments earlier in the season when Atkinson gave him run and received tons of usage. Granted, all that happened sans D’Angelo, but it’s Atkinson we are talking about.

The DJ was spinning the good tunes last night. Unfortunately, that hasn’t always been the case this season.

Played 37 minutes. Of course he did. The shot attempts will always be there. Just don’t expect D stats or you’ll be crying a Rivers. As you can see, it’s late. Thank goodness I’m almost done with this post. Actually, you should be thanking me. Now get to it!

We know he has 50-burger potential on any given night. It’s been a while, though. This is how living in California is. We are all waiting for the Next One. If you don’t know what I’m talking about, I leave you with this.

In my defense, I have a two-year old girl that goes crazy with those videos.