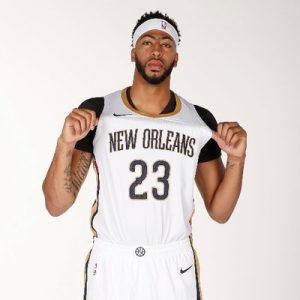 Anthony Davis is not from this planet. I don’t care what anyone says. What he’s doing on the basketball court is I. N. S. A. N. E. Since Boogie went down….hold that thought….I have the sudden urge to get down. Ha! I miss Soul Train. The Soooooooooooouuuuuulllllllll Train. Ok, back to business. Since Boogie went down due to injury, Anthony Davis has seen the usage rate get to as high as 40%. He has 13 double-dubs in 16 games. He’s gone 40/10 six times and has a 50/10 game during that stretch. Aaaaaaannnnd, he’s averaging close to 3 blocks AND steals. Averaging! But the most impressive and unbelieveable thing is that he hasn’t gotten hurt! Oh boy….I just jinxed him, didn’t I? Do I need to perform a seance? Sacrifice some virgins? What? UPDATE: I swear I didn’t know he left in the second quarter. Anyways, last night AD went:

I often hear this joke in DFS. No <insert player name>, no cash. Well, if AD stays healthy, you are probably not winning diddly poo this year.

A Dedmon is always hard to trust, but at least he’s providing the D. Literally and figuratively. Won’t be a league winner, but does contribute across the board. Will even contribute a 3 here and there.

Played 29 minutes. Hopefully, the 12 shot attempts were a sign of things to come, as he had been languishing in the 5-8 range.

Has been good. Just not great lately. Was playing at a top 25 rate earlier in the year. Now, DD is around top 60ish. Not bad. Not great.

Played 21 minutes. Has been a popular pickup lately, mainly due to his blocking prowess. With that said, it’s tough to trust a player that will only get around 20 minutes a game.

Played 27 minutes, which were a season-high. Now, I would walk 500 Miles. And I would walk 500 more. Before I ever rostered CJ Miles. On my precious fantasy teams. If you are desperate for 3s, CJ is your guy. If not, walk away.

Played 29 minutes. Not the most efficient shooter, but contributes in many categories and gets mid-20s in minutes backing up Lowry and DeRozan. Has proven more than capable when he gets starter minutes, which could be within in the range of outcomes as the Raptors may decide to give some rest to Lowry and DeRozan down the stretch.

Played 21 minutes and did not get run in the fourth quarter again. I’m as baffled as you.

Dragic is such a strange player for me. He can do it all, and I feel he has the potential to triple-dub on any night. The thing is, he’s only had one double-digit rebound game and one double-digit assist game all season. Very strange. For the season, he’s right outside the top 100 for fantasy.

Played 38 minutes. Keep in mind that the game went to OT. With that said, he’s been averaging close to 30 minutes a game over the past four. Why is Spoelstra trying to make Winslow a thing?

Played 38 minutes. This Johnson gives a little something something in everything. Just be aware that it goes limp from time to time.

Played 42 minutes. Every once in a while, Morris has one of those games. I shall call him Markieff “Halley’s Comet” Morris.

The nation’s capital has tranformed into an echo chamber, with “No More Wall” reverberating through the entire city.

With Satoransky at the point, the Wizards have transformed how they play basketball. More passing and movement, and it shows in the assist numbers. When Wall was playing, the Wizards were averaging around 23-24 assists per game. Since Wall has been out, that number has jumped to 28 a game, which is good for third in the league and two behind the Warriors. Just saying.

Paul has been aiiiiight, but I was expecting big, big things from him this season. I kind of under sold Harden. I’m an idiot. Damn….I just checked the numbers. Paul is a top 10 player for fantasy on the season. Even though it seemed like he was being a dud, Paul has still been a top 20 player over the past month. Woo hoo!

Gets consistent minutes and plays in a fantastic environment, but the usage is low and the ceiling games are non-existent. With that said, he collects enough ancillary stats to be a very useful player. I shall call him Velcro Man, as stats just find of way to stick to him.

If I ever time travel or hop between universes, the first thing I do is check the NBA box scores. If Melo has zero assists and the team lost, then I know I’m in the right place.

Keep losing Thunder. Keep losing. I hope we get to WESTCON-1, so everything hits the fan. If you don’t know, I’m a Lakers fan and need the situation to deteriorate in OKC so PG comes to LA. I know, I suck.

Played 23 minutes. I’d keep an eye on the minutes and usage for Brewer, as I was impressed much of the time I saw him play as a Laker. He plays good D and has the ability to knock down the J. Also, thrives in an uptempo environment. It wouldn’t surprise me if he works his way into the rotation. Alex Abrines, Terrance Ferguson, PJ Dozier, Daniel Hamilton, and Josh Huestis? Exactly.

Only played 20 minutes, but was in foul trouble. He’s rounding into form. With the Nuggets straddling the final playoff position, Millsap should be a vital cog down the stretch.

Has been starting at small forward and getting over 30 minutes of run. As long as that situation remains, Chandler will be an intriguing fantasy asset.

Malone, the genius that he is, benched Nikola for the fourth quarter. What a Jokic! In addition, a concerning thing for Jokic’s fantasy prospects is that his usage has come down since Millsap has returned. Definitely something to keep an eye on.

Barton and Lou Williams have to be the best sixth men in the league, right? Who am I missing?

Got the start at shooting guard and played 38 minutes. Not your average bear.

My boo. How high is Son going to rank him in the offseason? Why am I talking in the third person?

Mario with a D just keeps delivering every night. The recipe for a healthy relationship.

The Lord giveth. The Lord taketh away. Last night, the Lord was in a giving mood. He gets minutes, shot attempts, and gets the D stats. He’s been inconsistent this year, but more games like this should be on the horizon.

Most of the time, we should all just STFU and admire what’s around us. Enjoy.

Played 28 minutes. Outside of one game in which he played 18 minutes, since coming to Philadelphia, Belinelli has been getting around 25-27 minutes per game. He’s scored double-digits in 7 of 9 games.

The 30 points is all fine and dandy, but the downtowner. His first of the year! He popped his cherry.

The 76ers are tops in defending the point guard position. Ben Simmons is 4th in defensive real plus minus. Who’s the All-Star?

All he does is double-dub. Ok, I lied. Only 13 out of the last 15. He’s the perfect center for a tanking team. Score and get boards, but don’t play D. Now that I think about it, are the Knicks trying to tank?

Played 28 minutes and has been getting the start at shooting guard. Getting the minutes but not the usage. Keep an eye on him, though, as he coooooooouuuulld be an add. Who am I kidding?

Only played 20 minutes, but attempted 12 shots. I’ll take that ratio any day of the week.

Has really seen his usage and production slip since Mudiay, Ntikilina, and Burke have all started getting serious run. Always has the potential to have an FU game, but impossible to predict.

He’s the 12th player for fantasy on the year and is one of my favorite players. So smooth on and off the court. Y’all know what time it is.

Mr. Ed is your horse for boards. Played 26 minutes.

Played 23 minutes. While he played only 9 minutes the game before, he did receive 28 minutes two games ago. I’ve been impressed with the rookie in the limited amount I’ve seen him play. Is agile, can shoot, and able to hold his own on the court. Keep an eye on his minutes going forward.

Only played 20 minutes and got run off the court by the Warriors.

Played 25 minutes. The usage rate has been in the 28-29 range the last few games, which is phenomenal. I’m not sure if he will get more than 25 minutes a game, though, because Atkinson thinks he’s coaching a pee wee squad.

Top 5 player in fantasy for the season. The only thing he doesn’t do is get blocks. Scrub.

Every night is a Holiday for his fantasy owners. Has been, Oladipo-esque?

Cheick Diallo only played five minutes. Cheick mate. What did I say the other day? If Okafor is out, you play Diallo. If Okafor plays, you sit him. EZ PZ.

Played 31 minutes. Just play the man! He produces when he plays. Unfortunately, you just never know if he will get 14 minutes of run or 30.

Have you thought of any other sixth men to compete with Lou and Barton?