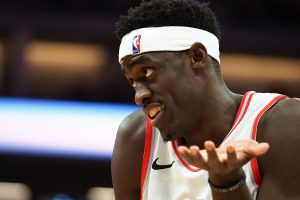 Played 32 minutes off the bench. Is he the best player on the Suns now? I’m kidding or am I kidding that I’m not kidding. Wait, that doesn’t make sense. It’d be I’m kidding that I’m kidding, right? Now I got myself all in a mental pretzel. It’s late and I have an 11-game slate to get through, so eat a you know what if you can’t give me some slack here. Oubre has been a top 50 player over the past six games.

Only played 20 minutes because the Suns suck. Since returning from injury four games ago, Gallinari has played 20, 26, 29, and 20 minutes. The usage rate has been 23 and he’s been a top 60 player. What’s the date for his next injury and how many games will he miss?

In 22 minutes! Let’s see, there’s Lou Gehrig, Lou Ferrigno, Lou Diamond Phillips, and….I’m putting Lou Williams at #4 in the pantheon of Lou’s. Any other suggestions? Since Gallinari returned, the minutes have dropped from 28 to 25, but the usage rate has increased from 36 to 38.5!!! Sweet!!!!

The center situation for the Clippers went down like this: Ivica Zubac got the start and played 22 minutes. He contributed 16 points, 7 boards, 1 dime, and 1 block. Montrezl Harrell played 22 minutes and produced 19 points, 5 boards, 4 dimes, 1 steal, and 1 block. Zubac will likely continue starting, while Harrell will get most of the minutes.

He scored in double figures!

Always gets me so hyped! Harkless has scored at least 10 points in seven games all season. Seven. So you see, the celebration is warranted.

Played 26 minutes, and led the bench…again. He ain’t going anywhere folks. Top 35 player over the past five games. Points, tres, boards, and D stats are what Layman provides. He’s shooting 64%, which isn’t sustainable, but most are dunks and alley oops, so maybe it is. I kid. Regression will come in the department, but his season number is at a lofty 54%.

Played a team-high 41 minutes. It’s been three games since being acquired by Sacramento. The first two games, Barnes chilled and attempted nine shots in each game. Looks like he’s comfortable now. The contributions in boards and steals is a lovely thing to see. If he can contribute like that (which I have serious doubts), he can be a top 100 player.

Solid, yet unspectacular top 115 production over the past couple weeks. The usage rate is down to 21 and the shot attempts are down by one a game. With that said, the dimes and steals have been there. The Kings play 12 games during the fantasy playoffs so listen to the wise words of William Wallace.

Hoisting up 17 shots per game and draining 3.7 tres. 23 points and 7 boards over the past six games makes him a swell fantasy Buddy to have.

That’s what I’m talking about! Injuries have messed with his season, but hopefully he’s healthy now because this is what he can do on a nightly basis. This Nuggets team is going to be a scary one when everyone gets healthy and has time to gel.

Ha! A Jokic! He messes around off the glass, with the pass, and in the stat sheet. I heart you Nikola. He was my first love, but then Luka Doncic came along. I’m very confused now. I’d like to move to Utah and clear my conscience.

Top 35 player over the past seven games. And he’s going to be coming off the bench when Gary Harris returns. So sick.

Played 13 minutes in his debut. IT can still get buckets and could be useful in the microwave role down the stretch. It looks like Juan Hernangomez will be the one getting fazed out for now. It will be interesting to see how the minutes are distributed when Harris returns to the mix. Something to monitor for sure.

If you can deal with the horrendous shooting percentages, Justise will serve up those counting stats. There’s always a price for Justise.

The plane boss, the plane! Waiters Island is open for business. The last four games, he’s played 31, 20, 41, and 32 minutes. The efficiency will be gut-wretching at times and the lack of D will put a frown on the face, but points, tres, boards, and dimes should turn that frown upside down at times. There’s also the occasional volcanic eruption which spews lava and increases the square footage of the Island.

The center shituation went down like this for Miami: Hassan Whiteside played 22 minutes and produced 6 points, 8 boards, and 1 steal. Bam Adebayo contributed 10 points, 6 boards, 3 dimes, and 1 steal in 26 minutes. No clue emoji.

From a fantasy perspective, Doncic is Russell Westbrook-light. He’s not yet averaging a trip-dub, but he’s close. Other than that, the turnovers and usage rate are high, while the shooting percentages are low.

Hardaway is only shootint 25% from downtown since arriving in Dallas, but he’s a career 34% shooter from beyond the arc. That number will drastically improve, especially since he will have Doncic setting him up.

Faried has dub-dubbed in eight of the past 10 games. The Manimal has been a beast, both literally and figuratively, but he may get put back into the cage, as Clint Capela is set to return after the All-Star break.

The power forward situation in Minnesota went down like this: Dario Saric got the start and played 24 minutes. He produced 15 points, 8 boards, 1 dimes, and 1 steal. Taj Gibson contributed 10 points and 8 boards in 22 minutes. The roles have flip flopped, and I expect the minutes to slant more and more in Mario with a D’s favor as the season progresses. Can’t shock the system, ya know?

Okogie isn’t fantasy relevant, and neither was the above clip, but IDC, IDC, IDC.

Played 23 minutes. There were rumblings that JV wouldn’t play in back-to-backs, yet here he was playing in a back-to-back. He should start starting soon and getting mid-to-upper 20s in minutes.

Woof. Woof. Bow wow wow yippie yo yippie yay. Top 10 player over the past six games. That’s without contributing much in the D cats.

A career high in points!!! Looks like everything gonna be aiight. Top 30 player since arriving in Chicago.

Got the start because Kris Dunn (tailbone) was out and played 34 minutes. Career-high in assists! Woo hoo!

Played 40 minutes. There are games when Green does think he’s LeBron James, like last night. Unfortunately, he either has a memory problem or is too woke because he realizes way too often that he is in fact Jeff Green.

I love Beal so much that I’d eat veal….and like it.

Played 34 minutes off the bench. Since arriving in Washington, Parker has played 23, 35, 20, and 34 minutes. If the SATs taught me anything, it’s that he will play 17 and 33 minutes the next two games. That’s how it works, right?

Got the start and played 31 minutes because Kawhi Leonard (knee) was out. The Raptors have a 13-3 record when Kawhi sits.

The shooting efficiency still stinks (41%), but the tres, boards, dimes, and steals have been plentiful. Top 25 player over the past four games.

The Force was with him last night.

Yawn. Wake me up when he does something special.

Played 14 minutes. Since arriving in Philly, Boban has averaged 13.1 minutes. 3 on 3 basketball will be an Olympic sport in 2020. Wouldn’t Boban absolutely crush in that format?

Got the start but only played 18 minutes. Did he sleep with Fizdale’s wife or something? She is very good looking so, I’d understand. Anyways, after producing at a relatively high level and averaging close to 28 minutes a game, Vonleh is now lucky to get 15 minutes of run. That makes me sad.

Played 28 minutes. This is his ceiling. Or is it? This could just be the third floor. Regardless, we just have no idea how the minutes will shake out with Fizdale, but even with that uncertainty, MRob has been a top 30 player over the past six games, despite averaging only 22 minutes per game.

On the flip side, Dre has been the #4 player over the past seven games.

Played 33 minutes off the bench. Threeeeeeeeeeeecolas. It’s been a long time for that. Did anyone notice that I changed it to tres? If so, has change been good?

Got the start and played 34 minutes because both Kyrie Irving and Terry Rozier were out. Top 60 player over the past seven games. The shooting touch looks to be back, but he’s still far away from where he was two years ago. That’s going to take time. The usage rate hasn’t ticked above 20 yet, so that’s something to monitor.

Top 20 player over the past seven games and top 25 on the season. Horford is the Rodney Dangerfield of both real-life and fantasy hoops. No respect.

The efficiency stinks but he contributes across the board. I guess one can be Smart owning and not owning him.

Only played 21 minutes. Didn’t see any news of injury. Just one of dem days? If so, I won’t take it personal.

Predictably led the Pacers in scoring, as the Bucks defense is designed to limit incursions into the paint and allow shots from downtown. The Bucks are ranked 30th in the number of opponent three-pointers attempted (35.5 per game).

Got the start but only played 29 minutes. Just another Rondae.

The efficiency isn’t great and the turnovers are high, but the usage rate has been in the mid-to-high 30s and he’s attempting over 24 shots per game. He contributes in all but blocks, yet the poor efficiency and turnovers keep him at a top 75 value. With that said….

Got the start and played 31 minutes. Since returning from injury three games ago, LeVert has played 15, 23, and 31 minutes. That makes me so happy. Can’t wait to see what LeVert can do after the break.

Played 33 minutes. How many more times will we throw Crabbe back into the ocean?

Played 46 minutes. Tres and boards, if you can stomach the poor efficiency. How poor? Sub-40% poor. I thought Carroll’s were supposed to make people happy?

Sexton has improved as the season has progressed. Yet, the efficiency is still piss poor. I can only recommend him if he chops off the “ton” from his last name.

Played 28 minutes and did this….

Over the past four games, he’s been a top 80 player. Points, tres, boards, and steals with good percentages. Say it ain’t so. I have to recommend him? Fine, I’ll take the walk of shame.

Played a whopping 48 minutes. There was a narrative I heard yesterday saying that Clarkson and Russell take their head-to-head matchups personally. I didn’t have time to dig into the numbers, but if last night was any indication, then I’m all about Narrative Street. Maybe Russell snitched on Clarkson as well.