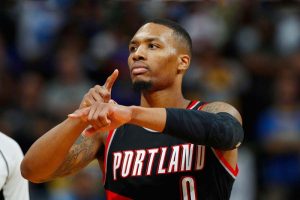 When my wife was pregnant, the experience was…..interesting. At least for me. I can’t even begin to try and understand what my wife was feeling. All I know is that women are the GOAT. Anyways, after the initial gamut of emotions, things became very business-like. Doctor’s office. One month. Two months. Three months. Everything was mapped out and the “ride” was slow and steady. Then, the due date approached and….well, I was Robert DeNiro in Heat. The bags were packed and the routes were mapped out with contingencies for all possibilities. At the same time, though, I was like my five-year-old son in the back of the car on a long trip: “Are we there yet? When will we be there? Why is it taking so long?” Damian Lillard and his girlfriend had been expecting the birth of their child for the past few days. Lillard had been struggling a bit with his shooting efficiency, but the raw production was still there. It could have been the matchups or anxiousness with the pregnancy. Regardless, it was Lillard Time for the whole family last night.

Played 30 minutes. So skilled and usually produces when he gets the minutes. Inconsistent, but the ceiling is sky-high.

Maurice Harkless did not play, so Evan Turner got the start and played 36 minutes.

He kind of sucks, but production will fall into his stat line if given enough minutes. After the game, it was announced that Harkless underwent arthroscopy on his left knee. The Jews had manna rain down from the heavens when crossing the desert. ET must’ve phoned home.

Please read CJ’s blurb from the prior day.

Do you think shaving his eyebrows would be Samson-esque?

When Rajon Rondo does not play, Holiday sees a 9% increase in usage rate. Rondo did not play last night.

Got the start for Rondo and played 29 minutes. He’s a chucker, whether he starts or comes off the bench. The minutes have been relatively secure, but he just doesn’t contribute much in the periphery categories.

Was questionable to play due to a hip flexor. Has to be one of the reasons why he’s been playing so poorly. The other? No motivation from his buddy, Bobby Portis.

G only has one triple-dub on the season. Yet, I’m always surprised when he doesn’t quadruple-dub. Logic.

Played 32 minutes. Has played 32, 29, 30, and 29 minutes the past four games. Shame on you Jennings, Brown, Snell, and Muhammad. I take that back. Much props to you Terry. I mean Jason. I mean….I’m not fond of people with two first names.

Played 19 minutes. He stuffed the stat sheet alright. With crumbs jumping out from his mouth.

Both Tobais and Lou played 37 minutes. They are the main cogs of the Clippers offense. DJ is like one of those dogs that jumps for frisbees.

When he delivers games like this, just STFU and say TY.

Honey, the Odometer is really broken this time.

Played 24 minutes in his first game back from injury. Arvydas loves to put the pedal to the metal, so that broken Odometer could be in trouble.

Led the team with 36 minutes and 17 shot attempts.

We’re tiny, we’re toony. We’re all a little looney. And in this cartoony. We’re invading your TV. Lonney has some skills. He can shoot from downtown and contribute in every category. He just doesn’t get the usage. Has received around 23-25 minutes over the past seven games. As the Warriors get healthy, the minutes should go away like the Looney Tunes.

The Warriors scored 81 points and only two others scored in double figures. No more blurbs for you!!!

Maxi Kleber got the start at center and played 33 minutes.

Ha! We’re back here again? Well, the Mavs are trying to lose and saw that they were pitted against the Kings, so what other course of action was there to take than to insert Kleber into the starting lineup. The Kings weren’t having any of it, though, as they were victorious in losing 97-103.

Played 25 minutes. Carlisle had said that these last few games would be DSJ’s time and he would be unleashed. Carlisle should run for political office.

My first thought was, “how did the Mavs trade for Andrew Harrison?” Well, his bro Aaron is apparently on the Mavs and played 20 minutes in a game last week. There were these videos back in the day called Faces of Death. In some of them, there were people who tried to commit suicide but were unsuccessful. That’s what this Mavs tank job is looking like.

JJ Barea was out for “personal” reasons. Translation: Coach, have you seen how hot my wife is? I can’t risk playing and pulling my groin.

Played 30 minutes. Has now played 30 minutes in three straight. Zach Randolph has DNP’d in four of the last five games, so it looks like Skal is going to be doing his thing for the remaining of the season.

Played 26 minutes. Naw, this is how you tank.

Played 28 minutes. Good to have the Markkanen back. Should get plenty of run to finish the season.

Played 29 minutes. Is dealing with a knee issue, so keep an eye on that going forward.

Played 18 minutes. Bulls signed him to a three-year contract on Monday. Can shoot and score, but doesn’t do much else. Keep an eye on the minutes.

The Kevin Kiermaier of fantasy basketball. Will have the stats at the end of the season, but the ride getting there kind of sucks.

Played 26 minutes. When Harden sits, Gordon sees a 4.9% in crease in usage rate. With the #1 seed locked up, could potentially see Harden sitting more games down the stretch.

Bam Adebayo did not play. Neither did Hassan Whiteside, so Jordan Mickey got the start at center and played 23 minutes.

The Mickey Mouse Jordan had played a total of 29 minutes since the start of the new year.

Played 25 minutes. Has been on a tear recently, with the most impressive thing being the assists and steals. With that said, Kelly O was matchup dependent. Has he become matchup proof? Me thinks no, but it’s something to keep an eye on.

Only played 17 minutes but did this….

Can fill the stat sheet on any given night, like he did last night. Has just been so inconsistent this season. I’m sure the injury and new team has a lot to do with it, but still…

Played 40 minutes and almost messed around. Two games back in the loss column for the eighth and final playoff spot. As long as Wiggins keeps shooting more than KAT, the Nuggets are alive.

Iblocka is back!!! That’s the Serge I know and remember. This current iteration of Serge makes me sad.

LaMarcus Aldridge left in the second quarter due to a knee injury. His status is unknown as of this writing. Ain’t no laughing matter.

Pau Gasol did enter the game for LMA and should see an uptick in minutes going forward.

13 Spurs played at least 10 minutes. The final score of 116-106 was not indicative of how bad a beatdown the Wizards put on the Spurs.

Played 28 minutes. You thought I was lying about the extent of the beatdown?