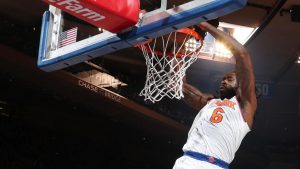 Most roosters are annoying AF, cock-a-doodling at the first crack of the sun. The Clippers Rooster, though, has been anything but, outside of missing a few games due to injury. He’s a top 30 player on the season and, over the past six games, has been the #12 player for fantasy. He scores and grabs boards, but the excellent free throw shooting on high volume is probably his greatest asset.

Continues to start and played 20 minutes. And therein lies the issue. Zubac can score, grab boards, and block shots, but he’s only averaging 18-20 minutes per game.

Played 38 minutes. And therein lies the reason to get excited. Over the past three games, Shai has been averaging 33.6 minutes per. He provides across-the-board production with very few turnovers, with the greatest contribution in dimes.

Played 28 minutes off the bench. Baseball incorporated the “opener” last season. The Clippers have employed the “closers”, as Harrell and Lou Williams have been the best bench duo in the NBA. Is this the next revolution to overtake the league after the corner 3?

Played 32 minutes. We know who Lou is, an assassin off the bench. The usage rate is over 33 and he jacks up over 16 shots per game. I heard a story the other day about how Lou was stopped at a light in his car when a man tapped his window and was going to rob him. Lou talked to him, told him who he was, then invited him into the car, drove him to get some food, and sat down and talked life with him. SWEET!

Played 35 minutes. Always in the Mudiay to shout Emmanuel when he plays like this. With Dennis Smith Jr. still nursing a back injury, and no timetable for his return, continue to rejoice and say his name.

Played 32 minutes. Love often hurts, but we endure the pain for moments of bliss, which is what Kevin provided yesterday.

Got the start and played 30 minutes. Since returning from a rib injury, Nance has played 23, 24, and 30 minutes. He’s been a top 30 player over that span, providing across-the-board production.

Played a team-high 37 minutes. The 20-point scoring streak ended at eight games, as the 54% shooting from the field was unsustainable. Still, 18 points wasn’t bad, but due to his lack of production in the other cats, when he’s not shooting well and scoring, his value plummets.

Played 15 minutes. He’s played 12, 19, and 15 minutes in the three games since returning from injury. Thompson has grabbed 6 rebounds in each game. That’s 6….6…..6. Some would say that’s the mark of the Kardashians.

Played 35 minutes off the bench. Clarkson is averaging 30.7 minutes and 15.4 shot attempts over the past eight games. He provides a little something something in all but blocks, but is primarily a scoring-dependent player.

Is it a coincidence that Google and Giannis are both named Alphabet? Things that make you go hmmmmmm. By the way, I don’t believe in coincidences. We all thought that Kawhi Leonard was the robot. Maybe he is. Yeah, he definitely is but Alphabet was staring in our faces the whole time.

The Nuggets got destroyed, 88-124 in Indiana, and Jokic blocked 4 shots. Yeah, just one of those days.

Yup, definitely one of those days.

One does not stop the Bojan. One can only hope to contain him. Well, the Nuggets did neither. Bojan is a high-floor player who provides a little something something in all but blocks. But, he accesses ceiling from time to time. The 35 points weren’t even a season high, as he dropped 37 against the Timberwolves back in late February. His career high is 44 points, way back in 2015.

This is what we expect on a nightly basis. Unfortuately, while he leads the league in blocks per game, the rebounding is light for a big man of his athleticism. Only 17 games with at least 10 rebounds in a game.

Got the start and played 24 minutes because Darren Collison (quad) was out. CoJo is a no go.

Played 23 minutes off the bench. The field goal percentage has been poor lately (45%) and the free throw shooting isn’t great (70%), but if you need points, boards, and some dimes, Sabonis is your guy. It’s too bad he only averages 24 minutes of run a game.

The 6 steals were a career-high. A wily Fox indeed. As for the poor shooting night, I’d put it on the back-to-back, as the Kings played the Suns the night before. On the season, Fox has a +/- of -10.7 and an offensive rating of 98 in back-to-back games (10 game sample). In any other scenario, the offensive rating is above 100. For some reason, the biggest decline in production comes in the dimes department, as he’s averaging 4.8, while that number is above 7.5 in the rest.

Played a team-high 40 minutes. Kuzma can score, no doubt about that. The efficiency, though, is a concern, as he often shoots in the low-to-mid 30% range. While he will grab some boards, the contributions in the other cats are minimal, which keeps his fantasy value low. A pure minutes and volume play if you need points and treys.

Eighth time messing around for LeBron. Last year, LeBron had 18 trip-dubs. The year before that 22. Anyways, these are basically stat-padding games for LeBron. It’s just too bad the Lakers are not in contention because he’d be averaging close to 40 minutes me thinks. Regardless, he’s still getting around 34 minutes of run and garnering a 39 usage rate. I guess we should call this period, Legacy Time.

Kemba has been all over the map this season, but lately, the Kemba Label has been straight fire. Top 20 player over the past seven games, despite shooting only 41% from the field. The 90% from the free throw line on 5.9 attempts and impressive 6.7 boards have helped.

Got the start and played 33 minutes because Nicolas Batum (illness) was out. Even when Batum returns, there’s a chance that the Hornets go with the youth movement and keep Bacon in the starting lineup. Bacon can contribute treys and boards. That’s about it.

Played 20 minutes. He will never be freed.

Played 22 minutes off the bench, as Tony Parker (personal) did not play. With the youth movement in full effect, Graham could provide a cheap source of dimes.

Played a team-high 36 minutes. If Kawhi leaves after this season, do the Raptors build around Siakam?

Got the start and played 23 minutes. Top 50 player over the past seven games despite averaging only 26.7 minutes. Since coming to Toronto, the usage rate has plummeted from 20 to 14. Due to his diverse game, Gasol is able to be fantasy relevant, but the lack of minutes and usage caps his ceiling.

Serge Ibaka only played 18 minutes off the bench and provided 10 points and 1 board.

Played 31 minutes off the bench. Even when Kyle Lowry plays, VanVleet does provide some value, but it’s all about starting when Lowry misses time.

Top 40 player over the past four games, despite shooting 38% from the field. If he qualified (only played 49 games), Paul would be 5th in assists and 6th in steals per game.

Played 24 minutes off the bench. He was a DNP-CD the prior game and received 21, 15, 13, 20, and 8 minutes the five games before that. The Rockets defeated the Pelicans, 113-90, so was likely a good of time as any to give Clint Capela some rest. Mike D’Antoni’s rotation is tight, so I wouldn’t rely on Faried going forward. Something to monitor, though, if he has included him into the rotation.

Played 30 minutes off the bench. Eric Gordon missed some time with an ankle injury, but returned to the game. The blowout nature and Gordon injury allowed House to get tons of run.

Led the team in both minutes (34) and points. That should tell you all you need to know about last night’s game.

Over the past 15 games, the Rockets have had the fourth-best defensive rating.

Not even a season high in points or shot attempts. Back in January, LMA scored 56 points on 30-of-33 shooting against the Thunder. LMA with the O!!!!

Played 25 minutes. If you need boards and blocks, Poeltl is your man. Over the past seven games, he’s averaged 7.9 boards and 1.9 blocks.

A strange game for DeRozan. First time all season that he didn’t grab and board and third time he didn’t attempt a free throw.

The Spurs crushed the Celtics, 115-96 in Boston. Seriously, Pop for President.

Got the start and played 34 minutes. I’ve been thinking all season that it would take a year for Hayward to fully recover, and that he’d be a solid value for next year. With that said, I was thinking more strictly from a health perspective. Now, do I have to think about the Kyrie effect? Whether he stays or goes?

Got the start and played 21 minutes because Al Horford (knee) was out. Daniel Theis backed up Baynes and played 19 minutes. Theis contributed 11 points, 7 boards, 1 dime, and 1 block.

Such a strange season for Kyrie and the Celtics. The team is struggling, yet Kyrie is having one of his best fantasy seasons ever. #9 player on the season and #9 player over the past seven games.

_lake Griffin provides plenty of points, treys, boards, and dimes. Just no stocks and the field goal percentage is spotty at times.

For the Warriors, it was the Steph Curry and Klay Thompson show. Curry contributed 26 points, 9 boards, 3 dimes, and 1 steal, while Thompson provided 24 points, 2 boards, and 2 dimes. Kevin Durant only provided 14 points, 5 boards, 11 dimes, and 1 steal. Durant’s production lately has been a bit head scratching. He’s consistently been a top 5 player, yet over the past five games, he’s been a top 60 player. The usage, free throw and shot attempts, blocks, steals, boards, treys, and points are all down. The dimes are the only thing that have increased.