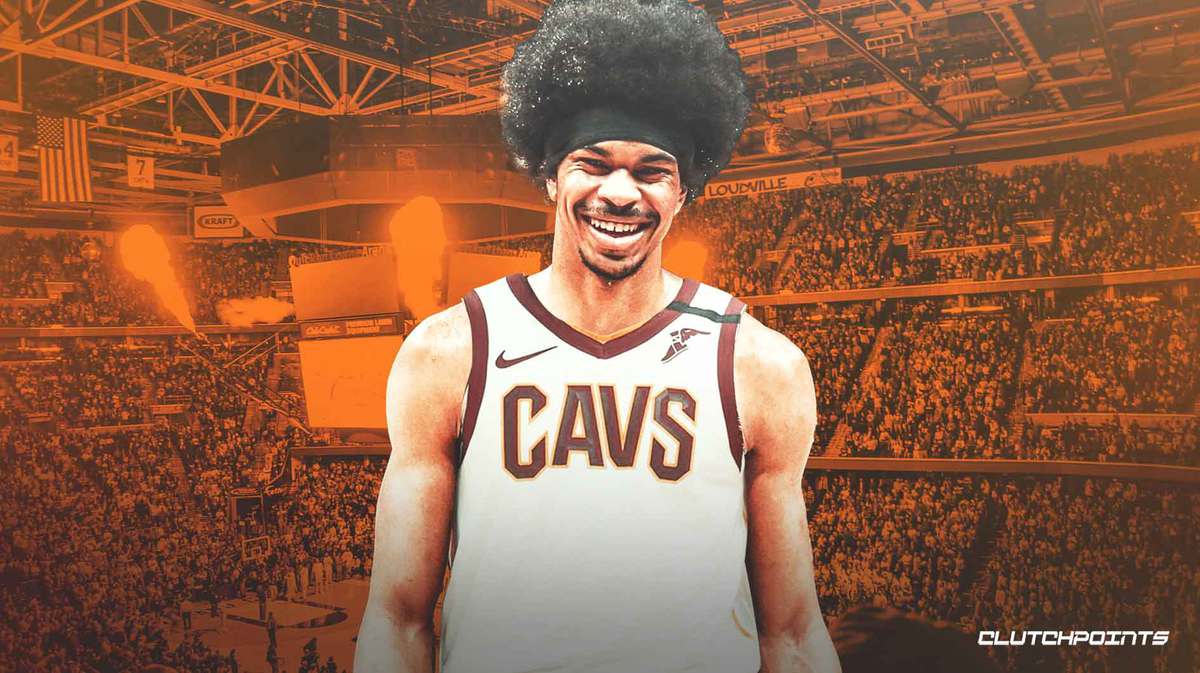 Life is what we make of it. We have to get off our asses and do work. We have to squash the internal hater and give him no light of day. But sometimes the Universe just gives. Back in 2000, I was given seats to the Lakers/Trail Blazers Western Conference Final game from work. I was sitting mid-level right behind the upper right corner of the backboard where Shaq grabbed that alley-oop pass from Kobe. What an amazing game and experience. Thank you, Universe. Last night, we were blessed with another such performance as the Universe took us to Jarrett, as in it was Jarrett Allen night.

In 42 minutes! Andre Drummond who? The loss of the unprotected first in 2022 hurts, but Allen is only 22 years old and looks to be a centerpiece for the franchise. Man, Brooklyn sure could use him, but they got freaking James Harden. And herein lies the lesson for today. When trading in your fantasy leagues, in order to get you must give. Same concept my wife and I adhere to. Sure we all would love to get something for nothing but that’s not how shit works. Make mutually beneficial deals. Alright, sorry for veering off-topic. Back to Allen. Over the last four games, he’s been a top 40 player and could finish inside the top 25 because he’s going to score points, grab boards, get his Mutombo on, dish out a few dimes, and has very good percentages (67% from the field and 73% from the line).

The Timberwolves fired Ryan Saunders last night. In three seasons, he guided the Timberwolves to records of 17-25, 19-45, and 7-23 so far this season. Outside of 2018 when the team was 11th in offensive efficiency, they’ve been in the bottom third for both offensive and defensive efficiency. According to Shams Charnia, Chris Finch will become the new coach. He was an assistant of Nick Nurse this season.

Continues to start and played 30 minutes yesterday. Over the last four games, he’s been a top 75 player, averaging 28.1 minutes, 13.5 points, 8.3 boards, one steal, and 0.8 blocks while shooting 75% from the field and 71% from the line. Is Thompson still with the Kardashian? I Wonder, will there be No More Parties in LA? Yeah right. Playas play but this high won’t last. Coming down is the worst.

This game went to OT….How?! The CeLtics were up by over 20 in the third quarter. As a result, Tatum played 41 minutes. Channing was loving it for sure though. He will take relevancy any way he can.

In 21 minutes off the bench. Over the last four games, Time Lord has been a top 25 player, averaging 7.8 boards, 1.8 steals, and 2.5 blocks in 19. minutes. The depth chart is packed ahead of him and his inability to stretch the floor is a detriment, but he’s a defensive maven when on the court. There was also an alley-oop he spiked after he pogoed off the floor.

Father, forgive me for I have sinned. I had Zion outside the top 50 before the season started. The seppuku knives are always razor-sharp and ready for service.

The points, rebounds, and excellent field goal percentage were all expected. Like who is stopping him at the rim? And we expected the defensive stats to surface. The increase in dimes from 2.1 last season to 4.1 this year is yummy. Too bad my guts are splattered all over the floor.

Top 30 player on the season. If he adds 0.3 and 0.1 blocks then he’ll be a 1/1/1 member and a top 20 player on a per-game basis. His length, agility, J, and handle package are so impressive for a player his size. It makes me happy to see him ball the F out like this. Too bad I just mutilated myself a few minutes earlier.

Hart’s fifth dub-dub on the season. This Hart exhilarates from time to time like last night, but more often than not, it crushes emotions. At least this Hart is a great rebounder. Good for action but terrible for long-term commitments.

Shai is so damn Gilgeous-Alexander. He’s so smooth gliding around the court and always seems to be in control. Inside. Outside. He’s got the complete package. For a guard, the 49% field goal percentage is mighty impressive. If he can get the defensive stats up, then we are looking at a top 25 player.

How many lives has KAT lost this season? Hopefully, all the bad juju is gone so we can get the awesomeness that he delivers. Uber Eats? KAT? Uber Eats? KAT? Tough one. Over the last four games, he’s been the number 11 player and is number three on the season. He’s only played 11 games, though. Not much to say here. He does everything without hurting you anywhere.

Made his fourth start in a row and has put up top 90 production in 29.5 minutes per game. Boards, steals, and blocks are what Noel has written in the hymnals. Mitchell Robinson’s neighborhood is under renovation for around a month, so continue to sing out his name, Noel, Noel, Noel.

Made his first start of the season and played 3o minutes. Both Paul Millsap and JaMychal Green were out due to injury so this is not the NWO. Nnaji is 20 years old, 6′ 11″, and 240 pounds. Prior to last night, he had played 7, 14, 27, and 24 minutes so he’s been carving out a role for himself. The alluring thing about him is that he can make it rain from downtown. Someone to monitor as the season progresses.

I have no doubt Murray reads Razzball because I called him Mehray and ever since then he’s gone for 30, 50, 35, 25, and 25 points. I’m that good. Over the last seven games, he’s been a top 25 player, as he’s shooting 52% from the field. On the season, he’s converting 47% of his attempts. This is a heater so expect regression sooner than later.

In 32 minutes off the bench. Nikola Jokic had a rough night, shooting 5-for-15, so others had to step up. Obviously not enough stepping as the Nuggets fell to the Hawks, 115-123. As for Morris, this was one of his better games on the season. Shit happens.

Everybody dance now! Capela is a top 25 player on the season. 13.9 boards, 0.8 steals, and 2.2 blocks while shooting 59% from the field makes me wanna rip off all my clothes and run outside naked. And I don’t even have Capela on any teams. Imagine if I did!

Just another Trae day. Uno, dos, tres, cuatro tres for Trae. Over the last seven games, he’s been shooting 49% from the field. In the past 14 games, it’s been at 48%. On the season, he’s shooting 43%. Regression? It’s going to happen at some point but what if this time is different?

Son PSA for the day (for all you day traders and top shot people): It’s never different.

In 41 minutes. For all of you who drafted Harden past pick number three, congrats. I passed over him multiple times with the number one pick. I’m a stupid, stupid man. He literally does it all and when he’s clicking, no one can match him for fantasy. Last night, he had a usage rate of 36.3, the second-highest since arriving in Brooklyn and highest in 17 games. This team is starting to figure it out with Harden as the initiator. The Nets are going to be fun when everything is healthy and they get reps with each other.

Go the start and played 34 minutes. Timothe Luwawu-Cabarrot injured himself early in the second quarter so Brown saw more minutes than he normally would’ve. He can do this when given an opportunity and is someone to consider when one of the Big Three is out. With that said, he is inconsistent so the floor is low.

In 32 minutes off the bench. Was this turn back the clock night with the DJ spinning retro tunes? Cuz that what it sure looked like. Only the third dub-dub on the season and the four blocks matched a season-high. It’s been a minute since I put this in a post so it feels good to do it again…..

Love that song. Keep doing what you’re DJ so I can post this more often.

After missing seven games due to injury, PG has played 27 and 33 minutes in his return. It’s about to get X-rated in Los Angeles real soon. If PG and Kawhi are healthy, they are going to be a tough f’ing out.

Number two player for fantasy on a per-game basis. Such a freaking beast. He garners a 34 usage rate on the season. When Ben Simmons is off the floor, that number spikes to over 40. Joel Harden!

911 indeed. BS is hitting his free-throws now?! Someone turn off then turn on the simulation. If there was an NBA Wizard of Oz, BS would be the lion. If he only had tres and percentages. He’d be the wizard then. Maybe then it’s the Wizard holding him down.

It’s so glad to have Siakam back in my life. I have him on so many teams. With that said, I probably overpaid. Lesson learned for next year. Over the last eight games, he’s been a top 30 player but is more like a top 40 player. He contributes everywhere but doesn’t dominate anywhere.

Awww, it’s so cute when teammates wear matching stat lines. Top 20 player on the season. He blocks well for a guard but the only bugaboo, which is a BUGABOO, is the 40% field goal percentage.

In 25 minutes off the bench. A surprising development since he was facing Joel Embiid. I honestly don’t know what to make of Boucher. The playing time is inconsistent, which I thought was because of a matchup, but that doesn’t look like the case anymore. He can easily go for 29 and 12 in 33 minutes during one game and six points in 18 minutes for another. He’s a top 40 player on the season but there’s volatility.

Got his second start of the season and played 40 minutes because Mehrrison Barnes was out.

In 35 minutes off the bench. LaMelo will likely win ROY but, man, Haliburton is freaking good. Top 45 player on the season despite making only two starts. He can do it all and the turnovers are low. This Haliburton is an oil field of riches for the Kings.

Giannis is making his free-throws now too? Seriously, someone turn off then turn on the simulation. This is getting ridiculous.

Got the start but only played 15 minutes. I have officially squashed all hope of DSJ being Stevie Franchise Part Deux. I know, super late to the party. I’m stubborn like that. Now that I am free from that masochistic relationship, I feel so free and alive. DSJ is just not a good basketball player. If the object was to jump high, then he’d win. Unfortunately, the object of basketball is to put a ball through the hoop, something DSJ has many difficulties doing.

In 33 minutes off the bench. DSJ sucks and the coaching staff raved bout Lee’s performance. With Delon Wright out for an extended period of time, Lee should get plenty of run. Saben Lee is such a gangster name. Like Maximillian.

Number 11 player for fantasy. Is that good? Asking for a friend. Remarkably, Vucevic is only turning the ball over 1.6 times per game despite garnering a usage rate of 28.5.

The Evan has been pure like water from the Rockie Mountain springs. Top 40 production over the last three games on the heels of 54% shooting. That’s going to come down so quench your thirst while you can now. Fournier is more like a top 75 player.