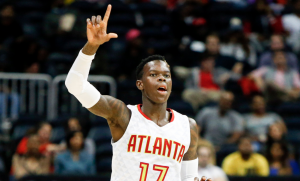 Basketball is a funny game. The Atlanta Hawks were riding a six-game losing streak and heading to Utah to face off against one of the best defensive teams in the league. Dennis Schroder, the point guard for the Hawks, had failed to score 20 points in each of the six losses. Then, a funny thing happened. The D went missing. Did Dennis change his name to Ennis? No!

Forty burger! Against a team that was 8th in defensive efficiency against the point guard position. Against Ricky Rubio, who was 10th in defensive real plus minus. Schroder had a 42.7 usage rate last night! Going forward, though, I wouldn’t expect too many performances like last night. Taurean Prince, who had been the alpha in terms of usage, got Prince’D, so someone had to step up. In addition, while Schroder has had a couple of big games this season, they have been too few to count on. Expect scoring to be in the 18-20 point range with 5-7 assists, and 2-3 boards.

With DeMar DeRozan getting the day off, Lowry had no trouble making the Magic disappear by himself. It sounds like Dwane Casey is going to rest both Lowry and DeRozan over the next week or so, especially on back-to-backs. He did also say that “they’d prefer to rest guys now than right before the playoffs so they don’t lose their rhythm.” That probably won’t help you for fantasy, so if you own any Raptors, be vigilant.

So, it was Malcolm Miller that started in place of DeRozan. He played 8 minutes, did not take a shot, and turned the ball over once. No High Life with Miller Time.

Played 28 minutes, as Fred VanVleet also got the day off. Wright is going to have some value over the next few weeks, as the Raptors are going to be resting guys in the backcourt.

Played 20 minutes. Siakam looks to be the main big man off the bench. He can do it all, even shoot from downtown. With that said, he just doesn’t get enough minutes.

Played 11 minutes. He was a thing a while ago, but looks to be behind Siakam at the moment.

Played 28 minutes. Boy, I was wrong on Isaac. Thought it would take him a while to transition to the pro game. While the offense is still raw, he’s so long and athletic that the steals and blocks are legit. Isaac has been getting the minutes and I wouldn’t be surprised if he starts getting around 30 a game.

Played 24 minutes. I don’t think he’s a particularly good player, but he’s been getting minutes and shot attempts.

The Dallas Tankericks started JJ Barea, Dorian Finney-Smith, Harrison Barnes, Dirk Nowitzki, and Dwight Powell. No DSJ, unfortunately, as my boo is recovering from a boo boo. Nine players received at least 20 minutes of run. Maximilian Kleber only played 6 minutes. Remember when he was getting close to 30 minutes earlier in the year?

Powell would be interesting, as he went 11/6/3 last night, but he only got 25 minutes of run. Nerlens Noel posted a 6/6/2/2/2 line, but he only played 20 minutes. They both block each other from access to any kind of ceiling.

Barea returned from injury and played 29 minutes. 10 points, 8 dimes, and 4 boards. We all know what he can do. He’s my favorite Mav.

Left the game in the second quarter, giving owners everywhere a heart attack and @ISBROWHURTYET some work to do. He was able to return in the second half. The injury sounded like a shin bruise or something.

Hill played 11 minutes and scored 2 points with a board and dime.

Emeka Okafor got the start at center, but only played 5 minutes. Cheick Diallo played 24 minutes.

Diallo has double-dub potential if he gets the minutes. Outside of an injury situation, it’s tough to predict when he will get those said minutes. Cheick please!

Played 31 minutes. I told y’all that he’d struggle without Bobby Portis “motivating” him.

Played 31 minutes. Is a gunner and had been getting the minutes prior to last night. With Holiday out, it was green light all night.

Played 25 minutes. Was questionable to even play last night, as he also had the flu. Cut him some slack. I didn’t write the recap when I had the flu. Damn, I’m soft.

Played 20 minutes. Would suck if Kilpatrick starts getting 20 minutes of run a game, as that would limit the upside of the other guards. With that said, any surprise that Austin Rivers led the team with 35 minutes last night?

Played 22 minutes, the fewest since February 23rd. Bjelica will have big games from time to time, but no way to tell when they will happen. The Timberwolves go through KAT, Teague, Wiggins, and Crawford. Scraps for Nemanja.

Played 41 minutes. Ho hum, another double-dub. The KAT literally does it all. And with 0 turnovers! MeWowzers.

I’m not a Wiggins fan, but he was getting Wiggy with it last night. The lack of assists I get. Once a black hole, always a black hole. But with his athleticism, the boards, steals, and blocks should be plentiful.

Jeff Teague’s results in his last six games with a closing total of at least 220 points: pic.twitter.com/GXChEJ4oLt

Played 36 minutes. Doing it all and is going to get the shot attempts on this team. Definitely has access to ceiling games.

First double-dub in a month. Don’t go so hard, Paul. Need you healthy for next year in LA.

The Thunder need a designated “get Russ pissed off” guy.

Played 35 minutes. First double-dub since mid-December and back-to-back games with 23 points. Channing must be so proud.

Played 29 minutes. With John Collins out due to injury, the Hawks have few options in the front court. That’s good for fantasy.

Got the start at shooting guard and played 32 minutes. Someone to keep an eye on, especially if he continues to start and gets 30 minutes of run. Lee is 25 years old, 6′ 6″ and 210 pounds. He played college ball at Drexel and Louisville and went undrafted in 2016. In his brief professional career, Lee has shown that he can shoot from downtown.

Jingle bells. Batman smells. Robin laid an egg. Those triple-dubs are going to come. I can feel it.

Alec Burks was DNP-CD. Man, I thought he looked pretty good earlier in the year. What happened?

Back-to-back games with a block for Blake. That should fulfill the quota for the remainder of the season.

Got the start at small forward and played 28 minutes. Still can’t shoot but the D stats are nice. SVG and his Johnson I tell ya.

Reggie Jackson returned to action and got the start. He played 15 minutes and scored 7 points. Ish Smith still played 30 minutes, but still kind of sucked.

The split will probably be 50/50 sooner than later.

Played 25 minutes. That’s what we’ve all been expecting from Len. First double-dub since February. I’m sure he’s out there on the wire. Tough to trust him, though.

I thought Phoenix would be an ideal spot for Elf. Then I remembered that even Orlando didn’t want him and actually chose DJ Augustin over him.

Played 37 minutes. How high am I going to rank him in the offseason?

10 players received at least 15 minutes of run for the Suns. The 11th played 12 minutes. The PeeWee Suns of Phoenix.

Another 40 burger last night. The crazy thing, though, is…..for Dennis Schroder I’m like “dayam.” For James, I can’t even get Harden excited.

Robin to Batman. Keep an eye on CP3’s hamstring, as he seemed to injure it at the end of last night’s game.

Played 26 minutes. I had to write him up, but if you are seriously considering picking up Mbah a Moute, you are either in a super duper deep league or……there is no or. Time to start preparing for baseball.

On a heater right now. Stroking it from downtown, grabbing boards, and dishing out dimes. Winter is coming.

Played 27 minutes. Nurk has all the talent in the world and can fill up the stat sheet. Just needs consistency.