Time to give you a peek into the mind of Son. Many, many years ago, I used to puff the weed, eat the shrooms, and smoke way too many cigs. When in this state of mind, I’d often contemplate the concept of fate and free will, and try to break it down. If I walked down the street and placed my right foot here, then left there, was that preordained, or was I in complete control? If I was meant to be with a woman, would said woman knock on my door if I never left? After way too many times contemplating this, I realized that if you want something in life, you have to go out and get it. With that said, sometimes when you’re out roaming the earth, the universe comes and slaps you in the face. Every night, when I write the recap, I search for who is worthy to be the lede. Last night, there was no searching as it was apparent that I Otto make Porter the lede.

Otto Porter got the start and played 31 minutes. He had played 23, 19, and 20 the prior three games. Now, keep in mind that Lauri Markkanen was out due to COVID-19, and he’s obviously not going to shoot that efficiently every game, but it was encouraging to see him ball out.

Got the start with Kevin Love out and played 36 minutes. Nance romance indeed. I think Nance is a reader of Razzball because he’s now notched a block in consecutive games and has five on the season. For those of you who don’t have your abacus handy, that’s one block per game. Nance has never averaged more than 0.6 blocks per game in a season.

An interesting start to the season for Drummond. We know the points and rebounds will be there with some dimes and defensive stats, but 2.4 steals and 2.4 blocks through five games? Holla! Now, the field goal percentage is only at 44%. Hmmm. He’s a career 54% shooter, so the beast may have more feasting to do, especially when you see the 30.9 usage rate and career-high 16.2 field goal attempts!! I love early-season sample sizes but, but, but….what if it maintains? 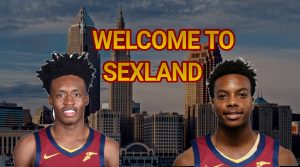 I love sex. I’m loving Sexton. Through five games, he’s a top 50 player! Now, he’s not going to shoot 55% from the field all season, so expect the points and overall rating to plummet because his contributions outside of points aren’t great.

Garland is a top 30 player! What the hell is going on in Cleveland? Like Sexton, he’s not going to shoot 50% from the field all season, but unlike Sexton, the contributions in dimes are for reals. He’s averaging 7.2, which is top 10 in the league.

In 14 minutes. LOL at the 11 shot attempts. Hey, shooters shoot. If you need boards and blocks, McGee can get it done in the limited minutes that he plays.

If only he would get his Rodman on, then I’d run a million Myles. On asphalt. Through walls. Forrest Gump wouldn’t have anything on me. With that said, that’s never been his game as he likes to chill out and drain tres, but those defensive stats are oh so lovely. He’s AVERAGING 2 steals and 4.2 blocks per game!!! HAHAHAHAHAHHAAH. Honey, I’ll be home in a few hours after I run for a few Myles.

T. J. Warren will have surgery on his left foot. There is no timetable for his return. I’m sad. Our regulator got regulated. The starting lineup on Thursday without Warren was Victor Oladipo, Malcolm Brogdon, Aaron Holiday, Domantas Sabonis, and Myles Turner.

Got the start but only played 22 minutes. I wouldn’t go goo goo ga ga over Aaron. Just chill and enjoy the Holiday season.

Dougie played a team-high 25 minutes off the bench. It looks like he may be the biggest beneficiary from the Warren injury. If you going to dance the Dougie, just don’t expect much outside of points, tres, and boards.

Only played 23 minutes due to foul trouble. This Carter Administration always has something amiss. Sad.

In a team-high 40 minutes. The 6.2 dimes are nice but the 35% field goal percentage will not suffice.

Played 27 minutes off the bench in his season debut. Will get run for as long as COVID is ravaging the squad, but should return to the grave when they return.

Led the Wizards in scoring. Holy field goal percentage, Batman!!! The lack of boards sucks. How are you going to make a house with no wood, especially when there are no bricks to be found? At least there were some blocks.

Messed around again. So crazy. Should I put a Westbrook countdown clock on the Razzball homepage? That’s 159 career trip-dubs. 30 more to tie Oscar Robertson for the all-time lead! Let’s go!!!

I enjoy my Beal hot, hot, hot. A cold Beal is gross and makes me want to vomit. Good thing it doesn’t happen often.

Played 21 minutes, as the minutes are slowing ramping up. A cold Beal isn’t the only thing that makes me wanna vomit. Add a cold Bertans. In fact, add a cold <insert any NBA player>. At least a cold beer is enjoyable.

In 22 minutes. That’s where all the hotness went!!! Sharing is caring, Raul! Most of his value comes when he starts for Westbrook on days he rests, but Neto has the ability to get hot, JJ Barea-style, in the short bursts that he plays off the bench. Not something you can rely on nightly, though.

The 76ers made the Magic disappear….POOF….116-92. As a result, no starter for the 76ers played more than 27 minutes. Tobias Harris scored 20 points while Joel Embiid and Seth Curry both chipped in 21 points. Ben Simmons only scored nine points, but contributed 10 boards, eight dimes, and two steals. But the most important thing was….

O. M. G. We are all witnesses! If the world ends tonight, at least we went out on a high note. Let’s check out how everyone reacted to the clip of the Simmons tres.

Evan Fournier left the game after eight minutes due to back spasms. Michael Carter-Williams replaced him and contributed 10 points, six boards, one dime, and one block in 27 minutes.

Played 30 minutes due to the blowout. He’s averaged 17.8 minutes on the season and probably won’t get much more, as Markelle Fultz has been very good.

Orale-f’ing, Holmes!!! Played 36 minutes and is waving sayonnara to Mt. Whiteside. Holmes is a top 75 player, but looks to be on his way to replicating his top 50 performance from last season.

In 26 minutes. In five games, Bagley is barely a top 300 player. He’s shooting 37% from the field! Now, he will shoot better but could it be that he’s just ass?

Every once in a while, Mehrrison pops one of these performances to make me reassess everything in my life. I don’t like to make rash decisions, so I’ll sleep on it. The following day, Mehrrison will return then everything will be right in the world again.

Coming into this game, Hield was 10th in tres per game at 8.5. After this game, I have a sneaky suspicion that he will be climbing the ranks.

Not bad for a season debut. Wall does look good. So good in fact that people from all political affiliations are asking for more Wall.

I get so Harden excited when I look at his stat lines. Then I go limp when I realize I only drafted him in one league.

Also made his season debut and played 26 minutes off the bench. This Gordon is far from a Commissioner. Not even a chief. Patrolmen have more diversity to their job description. Strictly a tres specialist.

Played 32 minutes!! I think Knox sucks. So much so that I didn’t even have him in the rotation coming into the season. What I think, though, doesn’t matter. In four prior games, Knox had played 18, 28, 26, and 16 minutes. And class? Minutes are half the battle. Yo, Joe! Now, if you are bold enough to try and enter Fort Knox, you’ll get some boards and tres. The percentages will be brutal and you won’t get much else. Fools good is housed in this Fort Knox.

Got the start and played 34 minutes as Pascal Siakam did not play due to disciplinary reasons. Powell can provide points, tres, and steals, but only when he starts, which won’t happen often. When he comes off the bench, Powell averages around 20 minutes per game.

The shooting efficiency is always a concern, but the rest of his game is so juicy. Points, tres, boards, dimes, and steals, but most importantly, he averages over 34 minutes per game. Viva Nick Nurse!!!

Played 24 minutes off the bench. I think it’s apparent that Boucher won’t play against big, strong offensive forces like Joel Embiid. Against teams that don’t have that force, he’s going to play over 20 minutes.

Played 26 minutes but was ejected after being assessed a Flagrant-2 foul on Isaiah Roby. Ingram swung his arm trying to block a dunk attempt by Roby when the follow through went straight into his head. The intent wasn’t malicious but the result was. Too bad because Ingram was cooking.

Only played 17 minutes. I couldn’t find the exact reason why, but I’ve seen some people mention foul trouble while others said he tweaked something. If it was an injury, it wasn’t anything serious because no updates were given. Another factor was that the Pelicans won 113-80 over the Thunder.

The free-throw shooting will kill you. Checks stats. 25%??!!! But only on 0.8 attempts per game, so not too bad. Rebounds, steals, blocks, and excellent field goal percentage are what you get from Adams.

The shooting form is much improved, but the percentages are still a problem. If he can figure that out, we could have a top 60-ish player for fantasy. On a separate note, which Ball brother will have the best career? Lonzo, LaMelo, or Liangelo? I’m rooting for the underdog.

Played 34 minutes as he picked up minutes after Ingram got ejected. Hart is mainly a boards guy, which is strange for his position.

The Thunder scored 80 points. Only two players, Al Horford (17) and Mike Muscala (10), scored in double figures. No stat boxes for you!!!

Played 28 minutes due to foul trouble. That said, he’s been awful to start the season. I’m glad I don’t own Ayton of Deandre but he’s probably someone to see if you can get at a discount.

Day in and day out, you know what you’re getting from Gobert. Like a young boy taking his sweetheart up to the top of the Eiffel Tower. Yeah, sexy time.