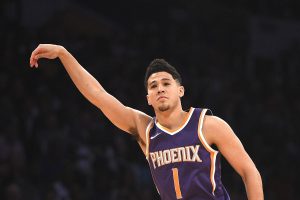 My wife commutes to work, I work from home, and we have two kids. I’m not a great cook. Yes, I can make decent tasting food, but my process is inefficient and I’m messy. Plus, I take the kids to McyD’s a little too often for my wife’s liking, so she usually cooks. It’s more work for her but her anxiety ceases to exist knowing that she’s in control. Hmm, now that I think about it, maybe she’s just a control freak. Thinks. Thinks some more. Yeah, she’s definitely a control freak. Anyways, we recently bought an appliance that has been a game changer for us: the instant pot. So quick, so easy, and so freaking delicious. We just cut up some veggies, insert some meat, dabble some seasoning, and voila. Now, we missed the great deals on it on Black Friday, so we had to wait, but then another deal popped up shortly after and our lives have never been the same since. Which brings me to Devin Booker.

Last night he played 37 minutes after playing 36 minutes on Saturday. Prior to that, he had missed six games due to injury. We always knew Booker could score, as he’s a professional getter of buckets. The game changer, though, has been the improvement in assists over the years. 2.6 dimes in 2015, 3.4 in 2016, and 4.7 last season. This year, he’s dishing out 6.5 dimes per game! Couple that with 24.5 points, 2.4 threeecolas, 3.9 boards, and 1.1 steals, and you’ve got a top 40 player for fantasy. There’s still room to grow, though, as evidenced by his last two games: 33 points, 2.5 threeecolas, 7 boards, 4.5 dimes, and 1 steal. He’s shot 53% and only turned the ball over 1.5 times, which is impressive considering he has a usage rate of 29.7. It’s only been two games, but his production has been good for the #4 player over that span. Get that Booker Cooker, while it’s smoking hot! But only if it’s on sale.

The crazy thing is that he sat most of the first quarter due to picking up two early fouls and still ended up having a ridiculous game. Naw, what’s truly crazy is the spelling of his name. Just know that your SON is able to write it without Googling. Yes, Razzball is still free.

Can you believe that Lopez has been a top 35 player over the past seven games? Believe it, as he’s been contributing 2.6 threeecolas and 2.6 blocks.

Got the start because Malcolm Brogdon sat (hamstring) and played 29 minutes.

With Ersan Ilyasova out (nose contusion), the rookie played a career-high 26 minutes. Prior to last night, he had appeared in one game for 13 minutes.

A quadruple-dub!!!! Rightfully so, the turnover category is not included in any messing around scenarios. Of course Lake didn’t get any blocks.

Bullock is a three-point specialist, shooting 35% from downtown and draining 1.9 per game. With the Drummond/Griffin beasts down low, defenses have to sag down low, which leaves open looks for Bullock.

Got the start and played 23 minutes. Kennard has actually received the starting nod in the past four games. Shrug emoji. He does space the floor and can drain threeecolas, so there’s that. If you were wondering…..naw, there’s no way you were.

Played a team-high 39 minutes. Warren has been a top 30 player on the season, and a top 20 player the past five games. Regulaaaators! Been mounting up all season. Look what adding threeecolas to one’s game can do.

Needs Ayton of work, especially on the defensive side of the ball, but the foundation is solid.

Fourth in double-dubs with 21. Don’t expect those D stats on the regular, but he’s still a top 75 player regardless.

Over the past four games, he’s been a top 40 player!

Forgot he was still in the league. Should I expect Robert E. to stroll into town on horseback?

Got the start and played 33 minutes. I looooooove clam chowder, so I don’t understand why I’ve never been a Crowder fan. He does provide threeecolas, rebounds, and a smattering of D stats. If he gets the minutes, he’s viable.

Are they still rioting in Paris? If so, send Rudy back to restore order. If you dress him as a police officer, then all rioting would cease. If you adorn him with a yellow vest, then the government would concede and give the protesters all that they want. He’s that good.

Not quite on Rudy’s level, but good enough to slide into anyone’s DMs.

He must’ve read the Gobert blurb. Wait, that would mean he’s a time traveler. Soooo, he traveled forward in time to read my blurb, then traveled back to the start of the game, and was therefore scared to play against Gobert. Makes perfect sense to me.

Harden also traveled in time and saw that I didn’t write him up for the lede, then traveled back and texted me when I was writing up his blurb. “Yo, Son…I dropped a 47-burger with a full stat line and Booker gets the lede over me?” James, I wrote you up the other night. Plus, you’re too good my man. How about you suck for a bit, then pop off for one of these games? It would have more effect. It’s like the guy that likes a girl so much that he looks like a desperate little puppy. But once he plays it cool and doesn’t give her attention….Does that really work? Asking for a friend. Anyways, what gets me Harden excited are the 2.2 steals per game. Over the past five years, he’s never averaged fewer than 1.5.

Coach Joerger punted the game in the first quarter. As a result, Nemanja Bjelica played 5 minutes, Willy Cauley-Stein played 7 minutes, De’Aaron Fox played 6 minutes, and Bogdan Bogdanovic played 10 minutes. Thanks for playing? I’m not going to mention the players who did play because it’s irrelevant. Thanks for making my life easier Coach Joerger. Same for the Timberwolves except…..

Got the start because Jeff Teague was out (ankle). Even though he’s been coming off the bench, Rose is still averaging around 29 minutes per game. He’s cooled off a little bit, but still shooting relatively well and remains a top 100 player.

Played 28 minutes. I love Markkanen and would be trying to acquire him in all dynasty leagues.

Got the start for Zach LaVine (ankle) and played 26 minutes. Once LaVine returns, I’d imagine that Dunn would continue to start, with Ryan Arcidiacono going back to the bench.

The Sixers lost 96-123 to the Spurs. Seriously, do the Spurs ever play any close games? They are either blowing out teams or getting blown out.

Top 50 player for the season. Top 20 player over the past eight games.

Got the start because Mike Conley couldn’t go (hamstring). The return of the Mack should be a short-lived one.

Led the team in scoring. Was a quiet night individually for the Warriors, even though the team scored 110 points.

He is so good. Do the Clippers unload the Brinks trucks for Tobias or does he take his talents somewhere else? There are a ton of free agents available in the upcoming offseason. I’m very curious what the Clippers end up doing. What say you?

So bad that it was impressive. And he played 30 minutes!

Beverley. Bradley. They kind of sound the same. Do we have a situation similar to the one in Brooklyn with Jared and Jarrett?