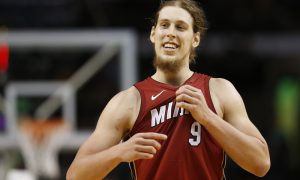 O is the most important letter in the alphabet. Without it, we cannot spell food. It is so amazing that it can transform into a number without changing shape, and without 0, a game can never end. Before you saying anything, ties are stupid. Let’s not forget about the Big O, often elusive but well worth the wait. So, is there any wonder why Kelly Olynyk is today’s lede?

Continues to start and played a whopping 45 minutes! Since entering the starting lineup 12 games ago, Kelly O has averaged 26.9 minutes, 13.7 points, 5.2 boards, 2.4 dimes, 0.8 steals, 0.7 blocks, and 1.7 tres. He’s been shooting 52% from the field, 43% from downtown, and 95% on 1.9 attempts from the line. Over the last eight games, though, the minutes have rocketed up to 32.3 minutes and he’s been a top 25 player! Oh, Kelly O! You make me want to bellow and bestow good tidings for providing fantasy inferno. A few weeks ago, I was worried what would happy to Kelly O once James Johnson returned to the mix. I no longer have any worries from that angle. The one concern I do have is will Spoelstra stick with him if the shooting efficiency comes down, because Kelly O is not going to shoot 57% from the field forever. He’s more like a 48% shooter. Until that time, though, enjoy the ride.

Returned to action and played 20 minutes off the bench. Points, boards, and blocks are what Hassan provide, and there’s always the chance for a Mt. Whiteside explosion. With that said, you never know what Spoelstra is going to do with his playing time.

Got the start and played 25 minutes. With Hassan back, his value obviously take a hit. I’d expect him to return to a reserve role soon.

Mario with a D has started the past 10 games, but he’s only been averaging 25.4 minutes per. He does provide some points, tres, and boards, but until he eats the magic mushroom, it’d be tough to trust him.

I clown on Wiggins constantly, so I have to be fair when he does post a decent game. Efficient and across-the-board production. Excellent. Do it consistently and when the team doesn’t lose by 17 points, then we can discuss some things.

Only played 29 minutes due to fouling out. What do you expect? It was Dre Day in Detroit.

I wasn’t joking. Dr. Dre neuters KATs. Over the past seven games, Drummond has been the #5 player in fantasy.

More like Kathy Griffin. Or Stewy Griffin. A joke of a performance! I kid, _lake has been good this season, but he has cooled off big time over the past few weeks. He’s been shooting 39% from the field only scoring 17.4 points per.

Played 27 minutes off the bench, while Reggie Jackson got the start and played 20 minutes. He and Jackson basically see saw minutes and production. Have fun figuring out who and when. Try it, it’s very mesmerizing.

I heart you, Luka. He’s a top 75 player, as the free throw shooting is below average and the turnovers are high, but, but, but….Yes, Luka makes me stutter. He contributes across the board and has a usage rate of 35!

Continues to start and played 36 minutes. In fact, Brunson has started 11 of the past 13 games, so he seems to be entrenched in the starting unit. His main contributions will be in tres and dimes, with some steals and boards sprinked in.

Played 25 minutes off the bench. Jackson has played 11 games since arriving in Dallas. He had received less than 10 minutes in four games and only eclipsed 20 minutes twice. I’ve always thought he sucked, so my perspective will always be biased.

Played 35 minutes. The shooting efficiency will always be a concern, but Ariza does contribute across the board and plays a ton of minutes.

The #1 player over the past six games. He could lead plenty of teams to chips this season, especially considering the Wizards are only one of two teams to play 12 games during the playoffs.

Played a team-high 41 minutes. A low usage player, Sato does have the ability to mess around on a nightly basis. Does he? No, but the potential is there and he will sneak one by the goalie every once in a while. The only thing he doesn’t contribute are blocks.

Played 29 minutes off the bench. The range of outcomes is so wide for Parker, as he can sky high like Spiderman or be Peter Parker.

Returned to the starting lineup and played 34 minutes. When Gay gets run, he’s a top 60 player, as he contributes across the board and doesn’t turn the ball over. The only concern is Popaganigans.

Top 20 player over the past six games. He contributes in every category. Over 5 boards and 5 dimes with 2.2 blocks! Imagine if the usage rate was higher than 19. No need to wait for Mr. Pink and the others, Mr. White is our guy.

Returned from injury and played 25 minutes. Right back to his dub-dubbing ways without any D. The minutes should ramp back up over 30 sooner than later.

Got the start and played 29 minutes. When you’ve had enough of Len is when he will post a monster game.

Top 35 player over the past eight games. If we were drafting right now, where do you think Trae goes?

Played 28 minutes off the bench. Interesting, I thought he’d go back to receiving 16 minutes of run. If he gets 28 minutes, then he’s fantasy viable, as he contributes in every cat.

Got the start and played 31 minutes. Love has been a top 10 player over the past six games. I will take the L on Love.

Got the start and played 33 minutes. Still have no clue why the Cavs weren’t starting him all season long, unless they don’t like starting their best players. Anyways, Nance was awesome, and starting is an important piece of information, but the most important take away is that centers against Brooklyn is totally a thing.

Played 20 minutes. No, he’s not fantasy relevant but I’ll always give a shoutout to Nwaba when I can.

Played 27 minutes. Allen is a low usage player, so he really needs to make his money on the glass. Well, the boards are too often light and so are the blocks, so Atkinson has no choice but not go to Jarrett. In addition, he does get punked down low against traditional centers. He’s still young, though, and still has a ton of potential.

Played 32 minutes. Russell has proven that he belongs. Now, in order to get into the top 50, he either has to increase the shooting efficiency, block some shots, or pull down more boards.

Played 30 minutes. I still worry that the minutes won’t always be there, especially when Caris LeVert (played 20 minutes) gets up to speed. With that said, there is a chance we get the pre-injury Dinwiddie.

He lives! Hey Jimmy, where you been? Ah, I’ve just been checking out Yelp reviews of activities to do in other cities. Never too early to start doing due diligence, ya know?

Who needs Batman when you have Robin playing 37 minutes and producing top 60 value over the past eight games. Ha!

Played 25 minutes. Damn, Favors has been straight balling lately. Top 10 player over the past seven games, and he’s doing it in 27 minutes per. Points, boards, and blocks are his calling card but he’s been providing excellent percentages: 67% from the field and 90% from the free throw line on 4.3 attempts!

Played a team-high 38 minutes and aaaaaaaaaaaaaaaaaaaaalmost messed around. The shooting efficiency has been a problem all year for Jingles, as he’s been hovering the low-40% range, and at times dipping below. The last few seasons, he was consistently in the 45-46% range.

He may not be an All-Star officially, and the free throw shooting sucks, but Rudy is a top 20 player on the season and represents his country damn well.

Slide into that DM anytime.

Played 35 minutes. Beast. I can’t wait to see what he can do with AD off the court. Wait? That’s pretty much what’s been happening.

Continues to start and played 35 minutes. Maybe that was premature ejacudropping, as he’s played 35 and 34 minutes the past two games. The usage rate is low, like super low, like 11 low. The shooting efficiency is poor as well, often sub-40%, but Williams can provide tres, boards, and steals.

Returned from a five-game absence and played 25 minutes in a starting capacity. Prior to the injury, DJ was receiving around 27 minutes per game, so I’d expect the same going forward.

Dotson has been averaging 30 minutes the past seven games. The efficiency hasn’t been great (43%), but Dotson has been providing 3 tres, 4.4 boards, and 2.9 dimes.

Got the start and played 28 minutes. Oubre has now started the past seven games and looks to have locked down that role. He’s been a top 65 player and providing across-the-board production.

Played 29 minutes. Johnson is the starting point guard for the Suns. Over the past seven games, he’s been a top 50 player. The efficiency is a concern, but he takes care of the ball and provides a little something something in every cat.

Ahhhh, the first 40-burger of the season for Booker. Last season, he had three. The turnovers are still high and he won’t block many shots, but the development in the rest of his game has Booker on the precipice of being a top 25 player at some point.

He’s been outside the top 300 over the past seven games. The shooting percentage is often poor and he doesn’t contribute much on D, but once in a while, Morris will provide a decent game like last night. This was our quota, so you probably won’t see me write about it him until next season.

It’s going to be fun to see if Tatum is a true alpha dog next season when Kyrie leaves! Ha!

Al is underappreciated and often overlooked because he’s boring and often doesn’t put up good games. Yet, at the end of the season, you look up the stats and you just nod up and down. He’s a set-it-and-forget-it fantasy asset.

Got the start because Kyrie Irving (thigh) did not play. That’s the only time Rozier has value.

Played 29 minutes. Hayward hit the game winner last night and balled the F out the prior game, but he’s still not there yet. Next year. Hopefully his value stays depressed.

Back-to-back good games for Barnes. I’m not falling for the banana in the tailpipe.

Harry Giles played 21 minutes and contributed 6 points, 4 boards, 2 dimes, and 1 block. The interesting stat line came from Nemanja Bjelica, who produced 5 points, 5 boards, 2 dimes, 1 steal, and 2 blocks in 30 minutes of run. It looks like the Kings aren’t going to push Giles, so Bjelica could be the biggest beneficiary until Bagley returns.

Ha! 5 shot attempts! Guy is such a Jokic! Your move Tesla.

Slowly but surely it’s coming back. While the production has been inconsistent, Barton has played 33, 32, 32, 38, and 33 minutes the past five games and has three very good games sandwiched around two mediocre ones. Only a matter of time.

Got the start and played 30 minutes. It’s all about the health and minutes for Harris. The health looks fine and last night was the first time receiving 30 minutes since he returned seven games ago. The most encouraging sign for Harris owners is that Malik Beasley only played 17 minutes while Monte Morris only played 15 minutes.

Played 31 minutes. No need to request a late checkout, as LeBron is already in Space Jam2 land.

Played 35 minutes. Boards, dimes, and steals are yours for the taking if you can handle the atrocious field goal percentage.

Played 27 minutes. Yup, it’s about that time. I like Wagner. He’s a big that can really shoot from downtown. He’s also not a stiff and has some dog in him. With the Lakers doneso, it would make sense for them to give the young kids more run.