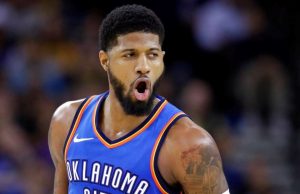 The Oklahoma City Thunder are Russell Westbrook’s team. Or are they? Westbrook was drafted by the Thunder and has known no other team in his 11-year career. He also leads the team in usage with a 31.2 rate. But….it can be argued that Paul George has been the best player for the Thunder this season. George is averaging more points, more threeecolas, shoots more efficiently from both the field and line, and takes care of the ball better. Last night, George put up:

Westbrook also had a great game, which I will discuss further below, so it’s an interesting debate as to who’s been the better player, but there’s no question that George has been a beast this year. From a fantasy perspective, he’s been a top 10 player, consistently for the entire season. That type of performance must place him in the pantheon of Georges: Boy George, Curious George, and now Paul George.

Beep. Boop. Bop. The Stocktonator had George as the #2 player last night.

AD may have a fracture in his left index finger and could miss 2-4 weeks.

Anyways, Westbrook is awesome. He’s averaging a trip-dub, but…but…but….Yes, I did stutter….the turnovers are high, and the shooting efficiency is low. Top 40 player on the season as a result.

Continues to start and played 37 minutes. Billy Donovan has believed and stuck with Ferguson all season long, and the faith is being rewarded, as he’s become an excellent 3-and-D player for the Thunder. Over the past four games, Ferguson has been a top 60 player, averaging 30.7 minutes, 13.8 points, 3.5 threeecolas, and 1.8 steals while shooting 43% from downtown.

Adams has scored in single digits only six games all season. Makes sense, as he’s shooting 60% from the field on 10.5 attempts. Even my abacus can make mincemeat of that. Anyways, points, boards, and D stats are what you can expect on a nightly basis. Over the past seven games, though, he’s been converting 70% of his free throws on 3.3 attempts per game and has been a top 30 player.

Whoa….Nurkic has been on some kind of heater. Over the past seven games, he’s been a top 25 player, averaging 14.5 points, 10.4 boards, 5.1 dimes, 0.9 steals, and 3 blocks!!! He’s also shooting 50% from the field and 75% from the line on 4 attempts. Too bad Nurkic and Jokic couldn’t co-exist. Regardless, even when Nurkic has an off night on the offensive end, he’s been able to maintain a high floor due to his contributions in the rest of the categories.

Top 15 player on the season. Y’all know what time it is.

C. J. will contribute points, threeecolas, and a handful of boards and dimes. He’s a top 75 player for fantasy but mainly meh. Once in a while, he will access a ceiling game to make us forget that he’s actually Steve Urkel.

Got the start and played 38 minutes because Nemanja Bjelica (back) did not play. Thee 22 points were a career-high. The future is now? I’m not completely buying that, as Dave Joerger likes having Bjelica’s ability to stretch the defense on the floor, but Bagley should continue seeing elevated minutes for as long as he’s out.

Got the start and played 39 minutes because De’Aaron Fox (toe) did not play. Smarter than your average bear, Yogi can’t outsmart a Fox, so won’t be fantasy relevant unless he’s out.

Got the start and played 36 minutes because Iman Shumpert (rest) did not play. Y’all know my love for BogBog, so I was happy to see him get run and get busy. When the Iman returns to the lineup, BogBog will slide back to a reserve role, but should still get 28 minutes of run and provide threeecolas, boards, dimes, and steals.

Played 23 minutes off the bench. I love the skill set, but the Kings aren’t going to push him so he’s likely capped in the low-20s for minutes.

Got the start but only played 25 minutes. Ibaka is a top 50 player on the season, but he’s cooled off recently, primarily due to the decrease in D stats and dimes. I want Tazmanian Devil Iblocka back.

Got the start and played 32 minutes because Kawhi Leonard (rest) did not play. An elite performance for VanVleet. One of the better backup guards because he gets around 26 minutes per game off the bench, but can access ceiling games because he does get the occasional start or two or three. The shooting efficiency isn’t great (40%) but VanVleet provides threeecolas, some boards, dimes, and steals.

Second game starting and played 31 minutes. Maybe he is better off feasting on second units.

Only the third time this season being held to single digits. Shit happens.

With Danilo Gallinari (back) out, Beverley made his second straight start and played 35 minutes after receiving 42 minutes the prior game. After averaging five shot attempts per game for most of the season, Beverley has hoisted 14 and 9 shots with 10 and 7 from downtown respectively. He’s also grabbed a ton of boards, dished out dimes, and brought the D. As long as Gallinari is out and he continues getting starter minutes, he should be a fantasy asset.

Returned after missing two games to injury and played 23 minutes. Sweet! Lou should get ramped up to the 27-28 minute range soon and continue being a usage hog on the second unit.

Led the Mavs in scoring. Also led the Mavs in least number of boards, dimes, steals, and blocks. Not factually correct but that’s only because a few players only received a few minutes of run and bageled in the stat line. Over the last seven games, Barnes has been a top 200 player. He scores and grabs a few boards, but does little else and has been shooting 34% from the field. woo hoo…..

Almost messed around despite having a poor shooting performance and being hung over from messing around last night…both on the court and at the after party. Not sure if that’s true but I’d put the chances at 99%.

Damn, DJ took us back to the old school when he was blocking over 2 shots per game. I like old school DJ.

Returned to the starting lineup and played 37 minutes after “missing” the past six games. He was rumored to be on the trading block and I wouldn’t be shocked if the Mavs try to boost his value before the trade deadline. From a fantasy perspective, DSJ has been brutal due to high turnovers and poor shooting efficiency. In addition, the contributions in the peripheral categories have been lacking. That makes me sad because I continue having flashbacks of Steve Francis. After watching highlights of Stevie Franchise, maybe I shouldn’t have disrespected him by putting DSJ in the same breath. DSJ is still young, though, so there’s still hope.

Predictably tore up the Suns…again. MEOW! It still irks me that KAT was third on the team in shot attempts behind Andrew Wiggins and Jerryd Bayless. Yes, the Timberwolves defeated the Suns 118-91 but still. It happens way too often.

Got the start and played 23 minutes because Jeff Teague (foot) was out. No foul trouble or injury, so I chalk it up to the “Is Rose an All-Star?” articles that proliferated the interweb before last night’s game.

Has started the last 10 games and played 25 minutes last night. The 21 points were a career-high, but it was mostly blowout run production. He was receiving heavy minutes while Rose was out, but those have dissipated with the return of Rose.

Played 28 minutes because Teague and Tyus Jones (ankle) were out.

Taj Gibson (13/7) continues to start at power forward and played 25 minutes while Dario Saric (5/4/3) received 17 minutes off the bench.

T. J. Warren only played 16 minutes due to injuring his ankle. Warren got regulated. Josh Jackson is likely the main beneficiary if Warren misses time. Speaking of….

Played 31 minutes. Probably a combination of Warren going down and the Suns getting blown out, but minutes are minutes. Jackson has the ability to contribute across the board. Just don’t watch him play.

Only played 24 minutes because he got ejected in the third quarter when he and Gorgui Dieng got into it. It’s been five games since Booker returned from injury. Over that span, he’s been a top 200 player. The usage rate of 30.6 has been fine, but the points and threeecolas have been lacking due to a decrease of shot attempts. The D stats, or lack of, have also contributed.