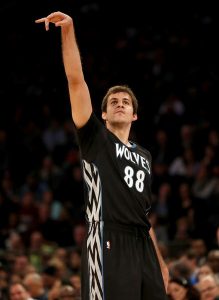 I remember this time back in college. A buddy of mine was visiting over Spring Break, and brought a guy that went to school with him. I had a bag of shrooms, a bag of trees, and Die Hard was playing on the tv. ‘Twas looking like a fantastic night. After we puff, puff, passed, and munch, munch, munched….my buddy’s buddy started saying that he wasn’t feeling anything and wanted some more. We advised him that he needed to chill out and let things percolate a bit, but he kept insisting. A few hours later, we found him curled up on a chair in the middle of a room, with a blanket over him, and swiveling himself round and round. My buddy’s buddy was bugging out big time, but that’s what he gets for being impatient. Which segues perfectly to Nemanja Bjelica.

Prior to last night, Bjelica started four games for the injured Jimmy Butler. He averaged 10 points, 9 boards, 2.5 dimes, and 1.5 steals. Not bad, but not great. Here’s the thing, though. He was playing a ton of minutes. 45, 34, 34, and 33 to be exact. Last night, he played 40 minutes. It was just a matter of time. Remember earlier in the year when Butler was underperforming? Similar deal, in that it took time for things to gel. Anyways, will he be dropping 30/12 every night? Probably not, but it’s not out of the realm of possibility. He has the ability and, most importantly, is going to continue getting a shit ton of minutes.

Only played 29 minutes because the Thunder demolished the Suns, 115-87.

Top 55 player for fantasy on the year. Averaging 9 boards, 1.3 steals, and 1 block a game. I’m pretty sure Adams boxes kangaroos for fun and makes bears run and hide in caves.

This is what I wrote two days ago: I’d keep an eye on the minutes and usage for Brewer, as I was impressed much of the time I saw him play as a Laker. He plays good D and has the ability to knock down the J. Also, thrives in an uptempo environment. It wouldn’t surprise me if he works his way into the rotation. Alex Abrines, Terrance Ferguson, PJ Dozier, Daniel Hamilton, and Josh Huestis? Exactly. You can call me Mr. Cleo now, thank you very much.

Here’s a game for you guys. At the conclusion of every Suns game, the number of points that Bender scores is the number of shots you have to drink. Great for college kids that have no money to spend on liquor.

Horford has been pretty dreadful for the last month or so. The production has been all over the map. With that said, he’s a triple-dub threat every time he steps on the court. The funny thing is that he hasn’t notched one all season, but he’s been close. I guess it’s only fitting that this post is all about patience.

Played 30 minutes and stuffed the stat sheet. I wonder what shape the sheet turned into?

Left the game after a scary moment. Brown dunked the ball with two hands, slipped, and fell with his body parallel to the ground. He landed on his back/head and looked like a rolly polly. Fortunately, he was able to walk back to the locker room but his status is unknown.

Stop it already! Give the ball to KAT!

And I’m not even a Timberwolves fan.

Has been getting around 27 minutes of run since Butler went down. Thibs has been going with an eight-man rotation, so Crawford is pretty much assured of minutes and shots.

Mario with the big D continues to deliver. Top 50 player for fantasy over the past month.

The Lord giveth. The Lord taketh away. Last night, it was the latter. With that said, he does contribute in the periphery categories, so can’t be too mad.

I feel like I’ve been writing up Carroll every game lately. And for good reason, as he’s been balling out.

Played 33 minutes. I’m a lobster guy myself, as it takes so much effort to get so little crab meat. With that said, every once in a while, you pull out that big, juicy piece of crab meat. Mmm mm mmmmmm. Crabbe’s season in a nutshell.

Played 30 minutes. Continues to ball the F out. Has been the Nets best player over the past week or so.

Played 21 minutes. Has now played 21 and 16 minutes the past two games, after numerous DNP-CDs and sub-10 minute games. I loved Monk in college and thought very highly of him during the draft process. He can straight up score the basketball, although the efficiency hasn’t been good in the pros. With the Hornets in the 10th spot with a 28-38 record, they may start giving the young rook more run down the stretch.

Mr. Anderson is not a good shooter, but does everything else well. It’s too bad that both the minutes and production fluctuate.

The point guard version of Mr. Anderson. The Matrix is getting lazy.

Steph Curry left the game after two minutes due to a sprained ankle. It doesn’t sound serious, but he’s likely to sit out against Portland.

Played 39 minutes and will be the man while Steph is out.

Is he the MVP of this Warriors dynasty? Do they win without him?