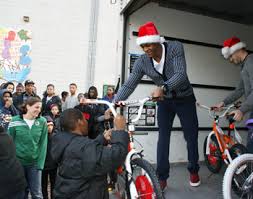 Santa Claus is known by the names of Saint Nicholas or Kris Kringle. Rajon Rondo is known by the names of Johnny, Swag, and The Yoga Instructor (nicknames courtesy of Basketball Reference). Claus’ height and weight are classified. Rondo is 6′ 1″ 186 pounds. Claus moves around via reindeer-drawn sled. Rondo uses his own two legs to run around the court. Claus is a global icon. Rondo could be if he hired the right marketing agency. Claus and Rondo are different on so many levels, but both are some of the most generous entities that man has ever known. Claus gives gifts to children that are well-behaved and coal to the bad children. Has anyone ever figured out why Claus is so freaking generous? Like, what’s his motivation? We are taught not to accept candy from strangers, especially those that stick their heads out from a windowless van. And for good reason. The candy is the bait to lure us in. And Claus? Anyways, regardless of motivation, Claus is a generous dude. Rondo is also generous. He dishes out dimes that enable his teammates to score buckets easier. In fact, he is so generous that he had dished out 6,216 dimes, good for 31st on the all-time list, before the start of last night’s game.

Make that 6,241 dimes, good for 30th on the all-time assist list. The 25 assist game was the ninth-best of all time! Scott Skiles, of all people, holds the record with a 30 assist game. Go figure. Rondo is not going to contribute much outside of assists and rebounds, but the dimes will definitely be plentiful. As for Claus vs Rondo, the edge has to go to Claus, as he has no rival and always seems to deliver. Rondo has his off nights.

Victor Oladipo did not play due to a sore knee. As a result, Lance Stephenson got the start and played 36 minutes.

Born Ready indeed. Are all Lance’s good playing with only one ball?

With no Dipo in the lineup, the shot attempts got dispersed pretty evenly. Thaddeus Young went 5-of-11, Bojan Bogdanovic 5-of-13, Myles Turner 6-of-12, and Darren Collison 7-of-12. Commie alert! No wonder they lost to the Mavericks, 98-94.

The Matrix is so nostalgic. Anyways, as I mentioned the other day, I’m not sure the Matrix has enough computing power to allow both Dirk and Lauri Markkanen to have good games on the same day. Checks Markkanen’s line.

Yup. As I suspected. The theory lives on for another day. Did you know that Dirk is a Top 55 player in fantasy? That’s how powerful the Matrix is. Never forget.

Played 18 minutes. Such a fickle beast he is. No wonder the teenage girls identify with him.

He’s slowly rounding into form. It’s only a matter of time before my boo starts shining like the star I know he is. Granted, that star could be a Halley’s comet which comes around every 75 years, but my love is true. In the meantime, Yogi Ferrell played 31 minutes and gets most of the backup run.

JJ Barea played 21 minutes and won’t play much more on a nightly basis.

He’s prone to the off night, but he is usually super efficient with the limited number of minutes that he gets. He’s got that secret deal with Coach Carlisle. “Coach, have you seen my wife?” “Say no more, JJ. Say no more.”

I love his game. Can post up, hit the mid-range, hoist from downtown, dish dimes, and clean up the glass. He’s so versatile. Is that what happens when you have three names? Or is it two and a half? Or is the secret in the hyphen? Regardless, Anthony Davis was guarding him and he had no issues taking it to him. Really impressive player. Y’all know what time it is. Monday. Tuesday. Wednesday. Thursday. Friday. Saturday. Sunday. It’s Rondae!!!!

Only played 22 minutes. It was the second game of a back-to-back, so there was that. The main culprit was the play of Caris LeVert, who played 32 minutes and was hot. This shouldn’t be a regular occurrence, but do keep in mind that he’s had three games with 22 minutes played and one with 19 minutes during the month of December. As for LeVert:

He assumes ball handling duties when on the court and is a willing and able slasher, but has the ability to stroke it from downtown.

Played 24 minutes. Balled out after I dissed him yesterday. My power is growing!

After watching Jarrett Allen and Timofey Mozgov play, I’m super bullish on Jahlil Okafor. Mozgov is an abomination. We knew Allen couldn’t score, but his defense was trash. Granted, it was against Cousins and Davis, but there were times when Davis would just drive right past him. Also, he couldn’t close out on outside shots. Okafor could do just as bad, but at least he can contribute on the offensive side of the ball.

Anthony Davis did not get hurt.

Before Jesus Christ is labeled as B.C. on our calendar. What is after? A.D. That’s how good Anthony Davis is.

Boogie gets down every night.

Played 38 minutes. He has his off nights, as he’s not a freaking robot! With that said, he gets so many open looks from downtown in the Pelicans offense, that it’s hard for him not to be productive on most nights.

Revenge! I guess not. I thought that narrative meant automatic big game?

Both Lowry and DeRozan struggled, which is why the Raptors lost 107-124. The Thunder are one of the best defensive teams in the league. With all the length they have now, it’s not a surprise. Now, if they can figure out things on the offensive side of the ball, this could be a dangerous team.

For Russ, I should just note when he doesn’t mess around. Is this team starting to figure it out? I may have to downgrade the WESTCOM to 4.

After playing like Curious George for much of the early season, it looks like PG is settled in and rocking and rolling. Stocktonator was all over him yesterday. Stocktonator knows. Listen to it. Can’t wait until he’s wearing Purple and Gold, though.

Played 41 minutes. He’s baaaaack. It’s nice to see contributions in the D stats. I have a feeling Jokic is going to start messing around a lot soon.

Played 46 minutes! It was an OT game. Remember when he and Mudiay were battling it out for point guard duties? What a frivolous affair.

Uno! Dos! Trey! I’m going to ejaculate all over my keyboard when Trey posts his first triple-dub.

Played 34 minutes. He and Lyles are the main guys off the bench. In an OT game, it was essentially a seven man rotation. Thibs just got an erection.

I love seeing 16-of-18 from the charity stripe. Denotes aggression. Butler is the alpha of this pack of wolves. Ah woooooooooooooo! The lion and tiger may be more powerful, but the wolf does not perform in the circus. I believe the Stocktonator penned that quote. No? Well, it loved Jimmy B last night, so it wouldn’t surprise me if it did.

Played 26 minutes. Crawford is the main scorer off the bench.

Played 36 minutes. More of this please! Papagiannis and Koufos both DNP-CD. Yes! More of that please!

I still like his potential, but it’s tough to predict the Kings on any given night.

Doug McDermott got the start at small forward and played 37 minutes.

Kanter laughs in the face of political oppression. Scoffs at family disowning him. Is not phased by The Process. Robin Lopez? Neuters him. Another explanation is that he partied so hard after his historic game on Christmas. Yeah, I’ll go with that one.

Did not shoot well, but played 28 minutes. Jarrett Jack was productive in 20 minutes of run, but it’s slowly happening folks. I think. I hope.

Led the Bulls in scoring, shot attempts, and to victory!!! You Dunn f’ed up if you didn’t scoop him up off the waiver wire earlier in the year.

I love how he’s contributing across the board this year. Gives him a high floor on those nights he doesn’t shoot well. Top 50 player.

No Gobert?? You do yourself a Favors and start Derrick.

Got the start at power forward and played 33 minutes. He starts. He plays minutes. He jacks up shots. It’s not rocket science. Ok, fine. This was probably more about matching up with the Warriors, but keep an eye on the situation, like “Secret Service looking into crowd” eye.

Live and die in the Hood.

Marcus Smart got the start for the injured Jaylen Brown and played 35 minutes.

Not feeling so Smart, huh?

Horford is the missionary of fantasy basketball. Underappreciated, yet effective and satisfying.

Why are his shoulders bigger than my head?

Does Kemba have one of the best, if not the best, step back Js in the game?

Played 32 minutes due to the injuries to JaMychal Green and Brandan Wright. Minutes equal money.

Continues to start and played 28 minutes. If you need someone that does more than breath, then take a look at Andrew.

Paging Dr. Hopla. Dr. Hopla. Your services are required immediately. Played 44 minutes in his return from injury. I’m so curious to see what his ceiling is. If there is one!!!

Played 30 minutes. He’s getting run due to the Lonzo Ball injury. Keep him in mind for the future, though. Hart can shoot, board, and is a very physical guard. Coaches seem to like him a lot.