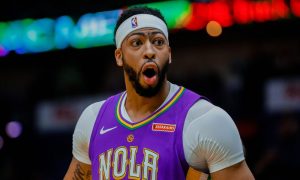 Who does that? This is A. D.’s seventh year in the league and he is moon walking, earth slithering, asteroid stomping, and universe hopping over all the competition. He has no weaknesses and is the perfect fantasy asset. There’s a reason why he was selected #1. There’s a reason he’s been the #1 player over the last week, the last month, the last two months…..for the whole freaking season. Now, we all know about the injury risk, but there’s also his playoff schedule, as he only plays 9 games (3 games each playoff week). Do you sell him, do you buy him? It’s a perplexing situation, but not as much as trying to make sense of the fantasy lines A. D. produces on a nightly basis.

Only played 26 minutes because the Bulls suck (lost 84-112). The only things that have been able to hold Vuc down this year have been a) birth of baby and b) blowouts. He’s averaging 20 points/12 rebounds with 3.6 dimes and will likely be the newest member of the 1/1/1 club. Top 10 player for fantasy.

Gordon is the epitome of the dualistic nature of the universe. Physically, he’s a marvel, as he has Space Jam hops and impressive handles for a man 6′ 9″ and 220 pounds. So it kind of sucks that he’s so meh for fantasy.

Only played 13 minutes. He wasn’t in foul trouble, so doctors diagnosed him with a case of the suckitudes.

Led the Bulls in scoring. Woo hoo! In the four games since returning from injury, the usage rate has dipped below 30 and the shot attempts have decreased by 4 shots per game, as Lauri Markkanen and Kris Dunn have come back. He’s been a top 125 player, a far cry from the top 50 he was posting earlier in the season.

Played 31 minutes. Is it October? No? Then why am I talking about Reggie Jackson? He’s a top 150-ish player who will provide points, threeecolas, and assists.

Played 27 minutes off the bench. For my Pistons fans out there, what am I missing here? And why does he keep playing?

Played 35 minutes despite fouling out. This is just the entrance to the path of the ceiling for JJJ. I’m very excited for his long-term prospects. Unfortunately, he’s very inconsistent and still fouls too much. Once he gets it going, though….

Played 28 minutes. There have been six other games in which Conley did not score in a game. Two came his rookie season, another two the following year, once in 2011 when he only played 24 seconds, and 1 in 2012. Shit happens. According to @DavidWCobb, he saw Conley icing somewhere on his left arm. There’s been no word on an injury, but 1+1=2.

Played a team-high 43 minutes. Go back and re-read the Aaron Gordon blurb. Now, pop some speed into your mouth, down it with a beer, and snort that ecstasy you crunched into powder.

Played 40 minutes. Since starting for the injured Jeff Teague, Jones has been a top 40 player. The usage has been low, but the assists and steals have been bountiful. Unfortunately, the clock will strike midnight soon as Teague should be back any game now.

Got the start because Kyrie Irving did not play (eye inflammation) and played 32 minutes. Only has value when injury strikes.

Played 32 minutes. Hayward’s career-high is 36 points! Shit happens? He’s been all over the map this season, so I side on this being an outlier game. With that said, it could be the start of something, but I need to see more consistency before I go Hayward.

Got the start and played 34 minutes. He’s baaaaaack. Points, rebounds, and assists are what you’re primarily getting with a smattering of threeecolas and steals. The Pelicans play at the fifth-fastest pace, so the environment is ideal.

An interesting observation from last night’s game was that it was primarily a six-man rotation. Every starter played at least 34 minutes, while Darius Miller played 29 minutes off the bench. The rest of the bench mob played 7, 5, 9, and 8 minutes. That’s lovely for fantasy, unless of course the players start breaking down or….gasp…..moves start happening. Is this the proverbial Custard’s last stand? The Pelicans are now 17-22, good for 14th in the Western Conference. Go max effort to try and make a push, then be sellers at the deadline if unsuccessful?

Played 35 minutes. I’ve never been a DRuss fan, so I always slant negatively towards him. The shooting efficiency sucks and he’s inconsistent. With that said, he does have a high ceiling and can provide a ton of points, threeecolas, and assists with some boards and steals mixed in. On the season, he’s a top 80 player.

Played 29 minutes off the bench. Jared Dudley got the start with Rondae Hollis-Jefferson out, but Carroll should be the main beneficiary. Points, threeecolas, and boards are what he provides.

Played 24 minutes after playing 33 minutes last game and scoring 32 points. Probably not fantasy relevant, especially since Allen Crabbe should be returning soon, but someone to keep in mind if injuries strike or Atkinson decides to get creative.

Got the start because Wilson Chandler was out (respiratory infection) and played 16 minutes. Bolden is 6′ 10″, 220 pounds, and 22 years of age. He played his college ball at UCLA, was selected in the second round of the 2017 NBA draft, and played last season in Israel. He’s a good passer, rebounder, and can stretch the floor. Not a pick up, but someone to keep an eye on.

Talk about asserting dominance, Embiid has been the #2 player over the past five games, and is bitch slapping everyone that forgot about him.

He’s trolling us, right? Simmons wants to see if he can dominate the NBA without shooting a threeecola and using his left hand instead of right.

Got the start because Jimmy Butler was out (respiratory infection) and played 30 minutes. Wait….what the hell were Butler and Chandler doing the night before?

He’s improved Ayton since the start of the season. The scary thing is that I can see him improving Ayton more.

Top 20 player over the past seven games. 9 assists and 1.1 steals!!! The usage rate has been an insane 32.7! Man, I really love how he continues to improve and expand his game.

Played 27 minutes off the bench. Don’t get gassed. He sucks.

Played 27 minutes off the bench. Behind Dewayne Dedmon on the depth chart, but has been getting over 25 minutes of run per game lately. Points, boards, and blocks are what you get, but the loveliest number is the 29.7 usage rate. When he’s on the floor, he’s not taking any pictures.

If Al Davis owned a basketball team, he’d draft Green #1 overall every single time. Has all the tools and makes for a fantastic video game player. Unfortunately, he’s missing some things from his game and is inconsistent.

Played 39 minutes. I’ve always liked Bryant from his days as a Laker. With that said, I didn’t think he’d continue playing this well and getting significant run. To the commenter that I told to drop Bryant for (I don’t remember who), I apologize. I have performed seppuku live, recorded it, and have it on a loop 24/7.

I don’t need to tell y’all about Sato. Right when the John Wall news hit the wire, y’all scooped him in every league. That’s why y’all are the sharpest out there.

Played 14 minutes, as he’s returning from injury. Shouldn’t be long before he’s back in the starting lineup to disappoint everyone.

Played 11 minutes in his first game back since 2017. Not fantasy relevant, as it’s going to take time to ramp back up.

Got the start and played 23 minutes in his return from injury. For the rebound-impaired.

Back to the bench and played 22 minutes. So, so sad.

A homecoming for DSJ, so Narrative Street wins again.

The Mavs spanked the Hornets, 122-84….in Charlotte. As a result, no Mavs starter played more than 29 minutes and 12 players received at least 10 minutes of run.

Willy was Freed due to the Cody Zeller injury, but only played 18 minutes. And the team lost by 38 points. Throw him back in!

Led the team in scoring. I used to love watching the video of 10 hornets invading an african honey bee hive and decimating the entire colony. The bees must’ve made a lot of honey, sold it to some farmers, and used the proceeds to hire the Mavericks to exact their revenge.

By George, this is Pauls’ team, isn’t it?

18th in dub-dubs with 17 on the season. I’m surprised he didn’t have more, especially with all the bricks Westbrook has been laying. Ba dum tss.

He’s really denigrating the trip-dub huh? I kid. It’s impressive that he can excel in so many categories. I shudder to think what his value would be if he wasn’t so good at grabbing rebounds and dishing out dimes, because right now he’s a top 30-40 player with a shitty free throw percentage and an insanely high turnover rate.

Played 34 minutes, as he was the replacement for Kuzma. Points, threeecolas, and some steals are what you can expect.

Played a team-high 41 minutes. The potential is there, but like my pops used to always tell me, potential don’t mean shit. Ingram contributes in everything, yet doesn’t excel in anything. He is mediocre, except for free throw shooting. He’s terrible at that.

Continues to start and played 38 minutes. I like Hart, as he’s the antithesis of Ingram, in that he’s tapped out potential wise, but he works hard to exceed it. Over the past four games, he’s been a top 40 player, averaging 36.2 minutes, 14.3 points, 2 threeecolas, 8 boards, 2.5 dimes, and 2.3 steals. I heart Hart.

Got the start and played 20 minutes. Per minutes, McGee is productive. Unfortunately, it’s a three-headed center monster now in LA, so you’re banking on efficiency.

Played 10 minutes. Well, that was fun.