Buffalo Wild Wings has a chart for the spiciness of the sauces in their menu: smilin’, sizzlin’, and screamin’. An Indonesian restaurant I saw on the internet had a chart of spiciness on the wall: 1 pepper, 2 peppers, 3 peppers, 4 peppers, and 5 peppers. The greatest spiciness chart, though, comes from my Korean brethren: 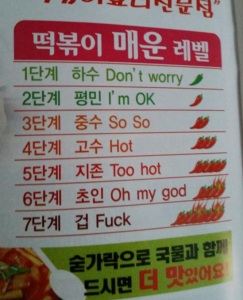 Last night, Steph Curry was at 8.

Played 34 minutes last night. After missing 11 games due to injury, Curry has played 34, 29, and 37 minutes in the three games since. With the nine threeecolas, that brings his total for the season to 80, which places him second in the league behind James Harden’s 83. Curry has played five fewer games!!! It’s only been 15 games, but Curry is the #2 player for fantasy on a per-game basis. The 30.2 points, 5.1 rebounds, 5.7 assists, and 1.1 steals per game are ridiculous. The 93% from the free throw line on 4.8 attempts is fantastic. The 51% from the field when he attempts 10.4 threeecola attempts a game is ludicrous. But the most laughable stat for Curry is the 5.3 threeecolas he makes per game. That’s almost more than the rebounds and assists per game. Harden is second with 4.2. Third place? Lauri Markkanen with 3.5. Way past F**k, right?

Beep. Boop. Bop. You know who was feeling saucy last night? The Stocktonator, as it had Curry at #5 last night.

Almost messes around and fills the entire stat sheet yet…..it’s wasn’t even close to being spicy enough. Why do I hear a douche in my head screaming, “Do you even lift, bro?!”

Got the start at power forward and played 22 minutes. Jerebko has shown to be useful when he gets time, as he can stretch the floor with his J and does work on the glass. Draymond Green is close to returning, so Jerebko will be relegated back to a bench role, but he could be a streamer in the right situations.

Over the past eight games, Thompson has been a top 60 player. He’s averaging 14.8 boards a game over that span!!! 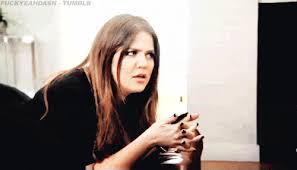 If he can be this efficient every game, then that would be Osman!

Only played 22 minutes. Even God had to rest a day after making the world.

Only played 24 minutes. How is this line even possible?

Nikola Mirotic did not play, so Randle got the start and played 35 minutes. Still only 23 years old and has one-year, $9 million left on his contract.

From a fantasy perspective, though, he’s a top 100 player because he doesn’t contribute much in threeecolas, steals, or blocks.

That’s how much of a blowout it was. Cheick please!

He lives! Batum has been very disappointing this season, which can be partly attributed to the productive year from Kemba Walker. Batum is averaging two fewer shot attempts per game. With that said, he’s the #121 player for fantasy, well off the 60-range he often found himself in years past. Last season, he ended as the #99 player. Batum owners would sacrifice their first-born for that.

Speaking of Kemba, after the insanely hot start to the season, he has been just as cold of late. Over the past seven games, he’s shooting 36% from the field and is the #126 player in fantasy. After having a usage rate over 30 in the early going, that number has ticked down to the 26-28 range.

Continues to start and played 25 minutes. Only the fourth double-dub of the season, but that’s back-to-back games with one. Which makes two. Which is appropriate because of the double-dub. I apologize. It’s late.

Praise be the Lord. Top 15 player for fantasy.

These are all things Wiggins can do. He just doesn’t do them consistently. Scratch that. He just doesn’t do them more than a few times a year. He’s never been a top 100 player for fantasy and, over the past seven games, he’s the #231 player. He’s shooting 38% on the season. With that said, he’s still only 23 years old. At what point can I stop writing, “he’s still only ____ years old?” 26, right?

Me-f’ing-ow!!! Top 10 player for fantasy. I would still have a hard time putting hard-earned money down on him leading a team to the championship, though.

A career-high in assists for Teague. Man, KAT has a me-f’ing-ow game, Wiggins was efficient and contributed across the board, and Teague dished out a career-high dimes. Aliens. Only explanation.

Played 24 minutes. Ish Smith only played 15 minutes due to injuring his groin, which could bring a slight uptick in minutes for Jackson. We shall see.

Hey, if God and Luka can rest, so can G.

The steals are back baby! This song is in my head now. Fittingly it’s a Chili’s commerical. Chilis are hot and spicy. So was Steph Curry last night. Mind blown. It all connects.

If God, Luka, and G can rest, so can Tobias.

He’s human after all. I was getting worried there for a sec that I’d have to find a cave and draw pictures of Montrezl balling so that future generations would know the impact he had while on Earth.

Played 13 minutes! Ha! Nobody messes with the Boban!

If God, Luka, G, and Tobias can rest, so can Gasol.

You don’t get a five-year, $152 million contract by taking games off. Over the past six games, he’s been a top 20 player. It’s nice to see Conley healthy again.

Played 29 minutes off the bench. Mainly a points and rebounds player, Green will chip in some steals and has averaged over 26 minutes over the last six games.

Played 13 minutes. I don’t know why I wrote him up. Just impressed  I guess that he’s still in the league and that the Knicks still owe him $38 million even though he’s playing for Memphis on a one-year, $1.7 million contract. This has to be some bet owner Robert Pera has or he just wants to stick it to James Dolan. Either one would be freaking hilarious.

Moe! It was Butler’s turn to be the man. Over the past six games, Butler has been the #9 player for fantasy. There will be ups and downs, as the Sixers have so many options, but you won’t find many better options who contribute across the board like Jimmy.

Whatever planet that Kawhi is from, I hope that we humans do not piss them off. Imagine a bunch of Kawhi’s screaming down from spaceships and attacking us with impunity. For you aliens from Kawhi’s home planet, here is a clip proving that he is all good:

In only 18 minutes off the bench! JV to Embiid….

Man, Lowry has been really struggling as of late. Over the past six games, he’s shot 37% from the field. He has no confidence in his J, as he’s foregoing wide-open looks and passing to teammates. He’ll be fine. If someone is getting antsy, I’d pounce.

Just missed tying a career-high by one point. This performance was rated R from PG, as he was murdering defenders all night. For the season, he’s the #6 player for fantasy.

Just Russ messing around with another triple-dub. Yawn. Moved into sole possession for third on the all-time triple-dub list. 30 more to catch Magic and 73 to catch Oscar Robertson.

Played 14 minutes. If you are feigning for blocks and steals with some boards, then take a hit of Noel. It’s tough to rely on him, though, because he only gets 14 minutes per game.

Played 30 minutes. The #162 player over the past six games. What a menace!

Returned from injury and played 34 minutes. Not your Average Joe, Harris plays over 30 minutes and provides points, threeecolas, with a smattering of boards, dimes, and steals. The union boys down at the docks would be mighty proud.

Played a team-high 37 minutes. Too bad Crabbe isn’t a defensive stalwart, so that I could highlight his crab-like agility when locking down opposing ball handlers. Oh well. If you need threeecolas, Crabbe is your guy. Just know that you’ll want to throw him into the ocean from time to time.

With Harris back, Dinwiddie went back to the bench. It ain’t no thing, though, as he still received 30 minutes of run. Points, threeecolas, and assists are what you get, which is good for a top 125 player.

Played 43 minutes. Look what happens when there’s no Wall! (John Wall did not play). Also helped that the Wizards played the Hawks, the natural elixir for fantasy.

Got the start but only played 21 minutes. I’m happy to see Bryant doing well, as I appreciated his effort when he was a member of the Lakers. He’s young (21 years old) and moves well for a man his size (6′ 11″, 248 pounds). With Dwight Howard indefinitely out, I hope Bryant gets significant run, as I’d like to see what he can do.

Got the start due to John Wall being out. When I saw the 7 assists, I thought I was reading the wrong player’s line, but then I saw the 3-for-12 shooting.

Got the start and played 38 minutes. The answer is no.

So much better coming off the bench.

It makes me so happy to see Collins healthy and balling the F out. He is so good, and he hasn’t started blocking shots yet.

With Taurean Prince out for three weeks, it was Bazemore who got the start and played 35 minutes. He’s very good when he plays, as he contributes across the board. Gotta figure he gets traded at some point, though.

Played 27 minutes. I thought that the Hawks would give Bembry the Prince minutes, but it looks like it’s Bazemore’s role for now. Bembry is athletic, but inconsistent, especially with his shot. Should see an uptick in minutes for as long as Prince is out, but will be behind Bazemore.

Jeremy Lin only played four minutes before leaving the game due to a lower back strain. That could be good news for Bembry.

Played a team-high 46 minutes in a game that went to OT. Remember in early November when Murray dropped 48 points? Well, the nine games following that eruption, he failed to reach 20 points. These ceiling games happen once in a while, but the consistency is just not there, but we keep holding on…waiting for the next one to satisfy us. The points, rebounds, and assists are all higher than last year’s numbers so far, but the shooting efficiency is way down. Once he straightens that out, top 50 player is not out of the question.

It’s been a while since we’ve seen a game like this from Fournier. Early in the season, the usage rate was around 25. Over the past few weeks, that number had plummeted to 20. Hopefully, last night’s game signifies a return to the early success he showed.

Played a team-high 41 minutes. Kind of creepy how similar his line was to Gay’s.

Brandon Ingram only played five minutes due to an ankle injury. Josh Hart and Kentavious Caldwell-Pope should see an uptick in playing time.

Played 40 minutes. It’s happening. I think it’s going to be glorious when Ball puts it all together.

Played 28 minutes (season-high while on the Lakers), while JaVale McGee played 19 minutes. Color me intrigued, as his defense has been very good. In terms of plus/minus, McGee was a negative 21, while Chandler was a positive 27. If you’re hurting for a center, I’d take a look at Chandler.