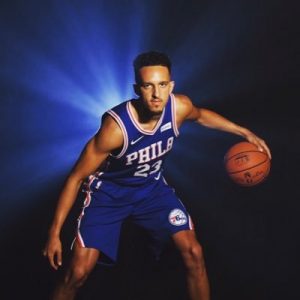 One of the beautiful things about the English language is its vast nature. One of the worst things about the English language is its vast nature. Take the word crane for example. It can describe a type of bird, a machine that lifts objects, or a specific type of neck movement. How about Derrick Rose saying “kill yourself” the other day? In a vacuum, it’s a terrible thing to say, but if you delve into the context, it does make some sense. It’s basically slang for “shut the F up.” Now, what about the expression “god damnit?” It’s usually used to express frustration or angst, but it’s also a military expression of encouragement. Thanks urban dictionary. Anyways, I’m going through all of this because of what Landry Shamet did last night:

In 24 minutes off the bench! God Shamet! Am I calling Shamet a God? Am I expressing awe and amazement? Am I frustrated because I did not play him in DFS? It’s all about context, right? At the same time, I could answer yes to all three. Gotta love the English language. Shamet has appeared in every game this season, so he has the trust of the coaching staff and fills a specific need for the Sixers, which is to space the floor and knock down shots. From a fantasy perspective, he doesn’t have that much value, as he doesn’t play enough minutes or jack up the necessary shots. On the season, he’s averaging 4.4 threeecola attempts per game and, outside of last night, he had only one other game with more than 10 attempts. With that said, it was nice to have him as the lede, as it was getting boring talking about the same guys over and over. In addition, he’s someone to monitor if injury strikes or he does take on a more significant role as the season progresses.

Only played 24 minutes because the Wizards suck. #4 player over the past five games and #11 on the season. Log onto the Twitter machine and shame him for not being #1.

Imagine if Alfred wanted to be Batman. Isn’t that what’s sort of happening in Philly?

Got the start because J. J. Redick was out (back) and played 24 minutes.

Hope you like Beal because that’s the only thing on the menu in Washington D. C.

Only played 19 minutes because he injured his right hand. X-rays were negative. Good times.

Played 22 minutes and could get more run if Porter is out for any amount of time. Good times indeed.

Continues to start but only played 18 minutes. Good times indeed for sure.

Played 17 minutes off the bench. Mahinmi has been a top 85 player over the past five games, significantly reducing the value of Bryant. Did I mention that it’s good times in Washington D. C.?

Collins has 15 dub-dubs in only 24 games. Embiid leads the league with 35 in 39 games. Collins is a top 80-ish player without contributions in D. Once….yes, I am a believer….he gets that going, Collins is going to be a beast.

Got the start and played 37 minutes. We’ve touched on the athleticism that Bembry possesses in the past, so there’s always been upside. Now, he’s getting the minutes due to the Taurean Prince injury. Over the past four games, he’s been a top 125 player, contributing in points, threeecolas, rebounds, and steals. The shooting efficiency has been good and the usage rate has been 21.5. Unfortunately, it sounds like Prince should be back in a few weeks.

Linsanity!!! When I finally find that bottle with the genie inside, I’m going to wish that he plays that period of time on eternal loop for me. Got the start because Kevin Huerter was out (back) and played 35 minutes.

Top 5 player. And I faded him coming into the season.

Got the start because Danny Green was out (rest) and played 34 minutes. Good, not elite.

The Force is lukewarm with this one.

Has consistently been a top 50-ish player all season. Crazy….like a Fox.

In 18 minutes off the bench. I’m not sure he had 20 points going into last night’s game. This is why the expression, Shit Happens, exists.

Warren 2020. Hey, he’s a top 30 player for fantasy. Seems more than qualified in this day and age.

Got the start because Devin Booker was out (back) and played 31 minutes. Should he stay or should he go? He is still 21 years old and has a ton of physical talent. I think he sucks but I’m just a dude writing from his mom’s basement.

It’s all about the D with Ayton. We know he can score and grab rebounds. Has been a top 20 player over the past eight games.

Got the start and played 31 minutes. Melton is a low usage player who derives much of his fantasy value from the D stats.

Played 38 minutes and saw a bump in usage because KAT was in foul trouble. So that’s why they gave him a gazillion dollars! I kid. Wiggins was supposed to be the next MJ. Maple Jordan they called him. The physical skills have always been there. The awareness, mental focus, and one-dimensionality of his game have been the question marks. I need to see improvement on a more consistent basis before I hop on.

Only played 24 minutes due to foul trouble. meow.

Mario with the D is a much better player than Taj, so it will be interesting to see how Saunders handles this situation.

Boy, not the best performance from George. Still, a floor game from PG is X-rated stuff for most of the players in the league.

We always debate about how players from different eras would perform in the present. That’s cute and all, but how about singling out those humans that could live in any era? Adams could walk among the dinosaurs. I have no doubt.

Why don’t teams give Russ the Ben Simmons treatment? Sag off him, cut off avenues to the lane, cling to the shooters, and make him drain threeecolas. He’s shooting a robust 23% from downtown this season.

Have you ever had a car break down requiring you to push it down the street? Pop the transmission into neutral and push. It takes time….and a couple of good people….to get the tires to turn, but once you get it rolling? Rollin, rollin, rollin. That’s the fantasy prospects for Millsap going forward.

Whoa! Where did that come from? Craig played a season-high 39 minutes and did work on the glass. Craig had pulled down 10 boards just one other time this season. What’s the expression again? Oh yeah. Shit happens.

Fourth trip-dub of the season. Should have 10. If only he were more selfish and scored more. Naw, I kid Nikola. Me loves you just the way you are.

Got the start because Gary Harris was out (hamstring) and played 36 minutes. He’s better coming off the bench, when he can go up against second units and get an increase in usage rate.

Played 25 minutes off the bench. Waiters Island is officially open once again.

The Heat are one of the toughest teams to figure out, minutes and rotation-wise. Take Derrick Jones Jr. for example. He had played 29, 20, 31, and 25 minutes in the previous four games. Last night? DNP-CD. After Spoelstra was talking him up. Not good times.

I knew Young was on a heater, but I didn’t know he was King Taco hot sauce spicy. Over the past six games, he’s been a top 30 player, shooting 70% from the field!!! Ha!

Got the start because Myles Turner was out (shoulder) and played 34 minutes. Still only 22 years old, I’m very curious to see who/what Sabonis develops into.

A steady real-life and fantasy player. BoBo gets the minutes, shot attempts, usage, and will provide threeecolas, rebounds, assists, and steals. Upside is limited, though.

Larry Nance Jr. only played five minutes due to a knee injury. It doesn’t sound serious but we will know more later.

He’s back. If the Kardashians can keep returning and producing, why can’t the Mister?

Got the start and played 30 minutes. Over the past seven games, Burks has been a top 100 player. He’s been getting the minutes, but more importantly, has been shooting much better (47%). I’m inclined to fade him, though, as he has shown to be a 40% shooter.

Played 32 minutes off the bench. My ClarkSON! Ha! I kid. Or am I? He’s been a top 70 player over the past seven games and is sporting a 28.4 usage rate. Hmmmmm.

Played 25 minutes off the bench. Super Mario got run because the starters all sucked.

Got the start and played 19 minutes. Oh well, I guess it was fun while it lasted. Could you bag that Kornet to go please?

Is he watching Ben Simmons on ESPN and thinking, “Hmmm, I can do that too.” Shoot the damn ball! He’s going to need it come playoff time.

Incredibly, that was the first game Curry dished out more than 10 dimes in a game this season.

Is Klay one of the best pure shooters in NBA history? Could he be the main guy on a team? I’ve got questions, y’all.

Batum has been bad this season, but I was surprised to see that he’s a top 125 player on the season and has been a top 70 player over the past eight games. The 10 usage rate is a joke, but he’s providing threeecolas, rebounds, assists, steals, and some blocks.

In 21 minutes off the bench. It was blowout run, as the Clips destroyed the Hornets 128-109. Run is run, though, unless you make it plural. Then, it’s no bueno.

Takes a lickin’ but keeps on tickin’. I’ve watched enough Westworld to seriously question this new and improved Gallinari.

Are Harris and Khris Middleton the same player? Asking for a friend.