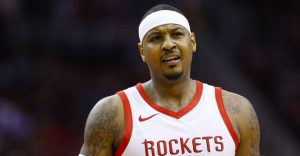 In the offseason, I thought the acquisition of Melo would be a detriment for the Rockets….on the defensive side of the ball. Little did I know that he’d literally suck the life out of the offense. Melo, the most powerful Black Hole in the universe. All jokes aside, Melo does provide threeecolas and some rebounds. The turnovers are miniscule as well. It’s tough to turn the ball over when you have no intention of passing. Other than that, you’re not getting much….literally. A combined 1.6 assists, steals, and blocks per game. 40% shooting from the field and 68% from the line? Melo is the 150th player according to BM. I’m actually surprised he’s that high. Now, he can get hot, as he had a streak when he scored over 20 points in three of four games. Here’s a little story for you. I recently joined Periscope. Every day, at least three hot women follow me. I know I’m a good looking guy, but come on! It’s tempting, but you know nothing good can come from it. Friends don’t let friends Melo.

George Hill is out for two weeks due to a sprained right shoulder. Collin Sexton should see an uptick in minutes.

The Rockets scored 77 points. Usually, that calls for a NO BLURBS FOR YOU!!! But it was a four-game slate.

These lines are not getting his owners Harden excited.

Maybe he needs some new neighbors. Those 6 steals are nice, but I was told that there would be assists. CP3 seems to be dealing with an elbow issue, which could explain the 11-for-34 shooting over the past three games.

A decent line, but not going to make anyone dance.

Played 34 minutes. Not a high usage player, Grant will provide a threeecola, boards, and steals with excellent percentages. Over the past week (four games), Grant is the 30th player according to BM.

I’m curious. Is George the best two-way player in the league? Is he better than Kawhi Leonard? Beep. Boop. Bop. Not sure which side the Stocktonator would choose, but he loved PG last night.

When the aliens do come, I want Adams front and center in the welcoming/assessing party.

Got the start, as Russell Westbrook was out due to injury, and played 34 minutes. Don’t worry Westbrook owners. Dennis will not be a menace when he’s out there.

Played a season-high 30 minutes and cracked the double-digit mark for the first time all year. The coaching staff has stuck with him in the starting lineup because they’ve liked his defense, so maybe this is a sign that he’s more comfortable and confident. I have my doubts, as he was averaging less than four shots per game and shooting a putrid 30% from the field. He was also contributing a steal here and there but not much else. With that said, he’s still only 20 years old and is super athletic. If he continues getting the minutes, there’s a chance, but I need to see it on a more consistent basis.

The Suns were up 32-13 over the Celtics after the end of the first quarter. Game went to OT with the Celtics emerging victorious, 116-109.

Seems like only yesterday when Tatum stans were taking victory laps. Currently, the 81st players according to BM.

Played 43 minutes and has reasserted his alpha dog status on this team. Over the last five games, Kyrie has been the 4th player for fantasy.

Has been dealing with a foot issue, but I’m not sure that fully explains his terrible season. Even though he’s been getting over 29 minutes of run, Brown is shooting 37% from the field and 60% from the charity stripe. The only category that Brown is not a negative in is turnovers. What can Brown do for you? Nothing.

The PJ Tucker of guards. Naw, that’s disrespectful to PJ, as he’s the 52nd player according to BM. Smart is 187th. Yup, killing your teams if you have him.

Played 21 minutes. Just not getting enough minutes to be fantasy viable.

Played 42 minutes. Why is he on this team again? Anyways, he’s the 131st player for fantasy, as he will contribute threeecolas, rebounds, assists, and some steals. The field goal percentage is putrid, though. Wouldn’t surprise me if he gets shipped off at some point.

Got the start and played 42 minutes. Regulators!!! Mount up!

Seven double-dubs in 10 games. Not bad rook. He’s a top 50 players for fantasy. Love seeing the 59% from the field and 74% from the free throw line.

Played 42 minutes. Monkey throwing darts at the wall. See if the shit sticks. What other cliches are there? Pick one.

Googly moogly boogly. Needs to get the turnovers under control, but it won’t surprise me if he’s a top 25 player next year.

When will the rooster crow to signal the end of Gallinari’s season?

Was questionable to play due to an illness, but started and played 37 minutes. Beep. Beep. Beep. That’s the sound of the Brinks truck backing up.

Got the start again but only played 12 minutes. Why is Doc messing with the Boban?

Got the start and played 35 minutes. Avery who? Things I have learned or re-learned the past couple of days. Don’t fade a self-made billionaire and always trust in the Logo.

Played 25 minutes. Just play the guy Doc! On the season, Harrell is averaging 21.7 minutes per game (26.9 over the past three games). He is the 57th player according to BM.

8-for-22 not sweet. 36 minutes. Sweet! First time receiving more than 27 minutes of run. Averaging 24 minutes per game, yet has scored in double-digits every game and jacking up over 12 shots per. More minutes please.

Crockett and Tubbs. McNulty and Bunk. Ren and Stimpy. Some of the greatest duos known to man. Add Lillard and McCollum.

Played 27 minutes as Jusuf Nurkic fouled out after 23 minutes.

Played 29 minutes and continues to contribute across the board. The 146th player for fantasy. Not sexy, as he doesn’t provide threeecolas, blocks, and the free throw percentage is low. ET does phone in rebounds, assists, and some steals, though.

Only played 26 minutes because the Warriors couldn’t handle the Deer. I don’t know how you stop Giannis. You lay off him, daring him to shoot a J, but he just uses that space to go through or around a defender. I wouldn’t be shocked if defenses start backing off more, which will just give G more room to build up speed to jump over them.

Example A of why being a patient grasshopper is usually a good thing.

That’s when you know things were clicking for the Bucks.

Played 21 minutes. Not garbage time either. Connaughton can shoot, especially from downtown, and will grab boards. Not much else, though, and he doesn’t receive consistent minutes (only averaging 14.3 on the season).

The lone bright spot on a night when the Warriors got waxed by 23 at home.

Left the game in the third quarter due to an apparent abductor injury. The severity of the injury is unknown at this time. Quinn Cook (played 19 minutes and went 15/2/5) would be the likely replacement if Curry were to miss any time.

Was getting smothered all night by the octopus/amoeba defense of Milwaukee. Shit happens.

Draymond Green did not play due to a foot issue.