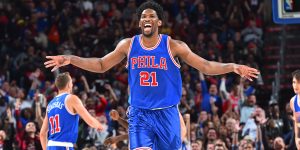 Usually, the cops are called when a player delivers a 50-burger, but last night history was made at Razzball HQ. The Dallas Mavericks defeated the Utah Jazz, 118-68, which was the first time that the Sound of Da Police was brought out for a 50-burger victory. The Jazz scored 13 points in the third quarter and 9 points in the fourth. Unbelievably, the record for the fewest points in a quarter was 2 (DAL in 1997 and GS in 2004). As a result of the 50-burger pasting, Jazz players…..NO BLURBS FOR YOU!!!

What’s even more unbelievable is that no Mavericks player scored 20 points. Eight players received at least 20 minutes of run and two got over 10 minutes, yet only five Mavs scored in double figures. NO BLURBS FOR YOU TOO!!!

Got another start and played 26 minutes. If he keeps getting the starts and playing time, we may have to call it Nance Romance time.

Played a team-high 34 minutes. Over the past four games, Sexton is averaging 35.7 minutes, 18.7 points, 16 shot attempts, 3.5 rebounds, and 2.5 assists. I believe it’s time the Cavaliers stop dying on the George Hill.

Returned from injury and played 24 minutes. He should slide back into the starting lineup and continue to tank your field goal percentage.

Played 29 minutes. The Cavs lost 95-119, so he got blowout run, but Nwaba can stuff the stat sheet if he gets the minutes. Something to monitor going forward.

When do frustrated owners start asking when they can defacate in the Otto Potty Jr.? Bad joke, sorry. 11-game slate last night so my mind is frazzled. By the way, I think OPJ will be fine.

Only played 21 minutes. Rebuilding the Wall?

3 free throws. 3 rebounds, 3 assists. 3 steals. In the name of the Father, the Son, and the Holy Spirit. Amen.

First time all season that LaVine failed to score at least 20 points. He’s played 15 games. Currently, the 30th player according to BM. The only glaring bugaboo is the 4.1 turnovers per game.

Continues to start at point guard and played 31 minutes. Assists, threeecolas, and steals are what you get. Plus, the 59-to-10 turnover rate is bene.

Played 23 minutes and looks to be the primary backup to Arcidiacono. Ha! I couldn’t write that with a straight face. Anyways, Shaq is not the most efficient shooter from the perimeter. Is that the default setting for the name? His main value comes from steals, but he can deliver some dimes.

Played 29 minutes. He has nice hair.

I guess Brown can do from time to time, instead of just providing doodoo.

LMAO! All one can do is laugh.

Played 19 minutes. Not sure if he’s getting playing time because of blowout (Spurs lost 96-116) or if he’s starting to carve out a niche. Y’all know I was high on him coming into the season, as he can deliver those blocks and boards. Keep an eye on his minutes going forward.

Got the start because Trevor Ariza was out for personal issues and played 25 minutes. I could see him carving out a role, so watch the minutes and, obviously, any trades that happen.

Ayton County must be inhabited by twins, because it only produces double-dubs.

Continues to start and played 32 minutes. The answer to your question is no.

He’s developing into a superstar. Or is he already one?

Got the start and played 29 minutes. Led the team in shot attempts. How are he, Porzingis, and Zion going to fit together?

Continues to start but only played 18 minutes. The minutes are going to be an issue. Just trade Kanter already! Anyways, he’s still providing boards, blocks, and steals in the limited time he’s playing. In seven games this month, he’s averaging 3 blocks in 22.8 minutes per game.

Got the start and played 21 minutes. He sucks.

Played 32 minutes, as the Knicks got blown out, 103-128. If only you could predict when the Knicks would get blown out, you could play Trier. Wait. Duh. Play Trier every night. Checks game log and sees he only played 22 minutes in a game the Knicks lost 89-115. It sounded good for a sec.

When Westbrook is out, Dennis is a menace.

Continues to start and played 32 minutes. It looks like he is getting more comfortable in his role, but he’s far from being a fantasy asset. Keep an eye on him, though.

Returned from injury and played 34 minutes. If he was out of sight, out of mind, let me remind you that he’s the 26th player according to BM.

Played 41 minutes. Cherish every minute he does play, as the next one could be his last. Just keeping it real.

We asked for Moore and Moore is what we got. The 23 shot attempts were a season-high and he’s scored at least 30 points in back-to-back games. Moore please!

Played 14 minutes. It’s either because someone stabbed Julius in the back or foul trouble.

Yes! Our first binary code line of the year.

Got the start and played 28 minutes. Thibs be loving his Taj. I guess it makes sense because the original Taj Mahal was built to illustrate the love story between Shah Jahan and Mumtaz Mahal.

Is it really happening? Wiggins has been providing the D. Has he met a new woman or something?

He definitely has a new woman and she was most definitely in the crowd last night. As much as I’ve shitted on Wiggins in the past, it’s only right that I give him props when he does well. Over the past six games, Wiggins is the 34th player according to BM.

Only played 16 minutes due to foul trouble.

Gasol has been up and down this season, yet he’s the 23rd player according to BM.

A true MC. Conley has this Grizzlies team at fifth place in the stacked Western Conference and has helped guide the squad to wins over MIL, PHI, DEN, and UTA.

Starts and played 38 minutes. Only the devout enjoy entering the Temple, but he plays a ton of minutes and provides threeecolas, boards, and steals with a low turnover rate.

Played 29 minutes. Is averaging close to 28 minutes per game for the month of November (seven games). Mack can provide some points, threeecolas, boards, dimes, and steals. Not many, but enough to make me spend time writing about him.

Yawn. Wake me when he jumps over a building or something.

Remember Goldilocks and the three little bears? Well, Middleton is the porridge that’s neither too hot nor too cold, but just right. I mean, the universe is too freaking good. Seriously, what else would we expect from a Middleton.

Played 27 minutes. The minutes are inconsistent, but when he plays, Connaughton does provide a smattering of boards, dimes, blocks, and threeecolas.

Holy shit balls! Not one but two blocks! And a stat sheet stuffing performance. Where’s the escalator for Hell? I won’t even bother trying to press the elevator for Heaven.

Beep. Boop. Bop. Is that you Stocktonator? At this point, I’d be surprised if he wasn’t a robot. Any of you remember that 1980’s tv show V? If someone pulled off Kawhi’s face Scooby Doo style and underneath was a lizard like in V, I would just nod my head in acknowledgment.

Got the start and played 27 minutes. When teams go small or if there is an agile stretch 5, then it’s no time for JV. When there are bruisers down low, then you know the deal. It also helped that Serge Ibaka was not available last night due to knee soreness.

Danny Green left in the third quarter due to lower back tightness. Status is unknown at this time.

Played 21 minutes due to the aformentioned Ibaka injury.

Still starting and played 34 minutes, but the shot attempts are way down. It helps that he contributes in other categories.

Only played 22 minutes, as a result of early foul trouble. Was in line for a monster game.

Look at the size of that Johnson!

Jarrett Allen did not play, so Mr. Ed got the start and played 17 minutes.

Continues to start and played 25 minutes. I’m not trying to make him a thing. It’s not my fault that Atkinson continues going to Jared.

With the Caris LeVert injury, Russell was expected to carry the load, as he had seen the highest usage rate bump in the past. As usual, he disappointed. Still DLoading……

Got the start for some reason and played 26 minutes. Throw him back into the ocean!

Played 23 minutes. Did go down at the end of the first half from an ankle injury, but was able to come back out in the second half. Whew. Y’all know what day it is. Monday. Tuesday. Wednesday. Thursday. Friday. Saturday. Sunday. Rondae!!!!

Played 29 minutes. If I’m the Nets, I stop waiting for DLoading and play Dinwiddie. He seems like the much better player to me.

Got the start at power forward and played 23 minutes.

I think Chandler and Muscala neuter each other, but it’s a situation to monitor.

Simmons had an 11 usage rate last night. As someone wrote on Twitter last night, Simmons is the Chris Bosh of this squad.

Embiid asserted his dominance last night, but Butler ain’t no chump. The dynamic between Embiid, Butler, and Simmons is going to be an interesting one indeed.

Played 39 minutes. I think Vuc enjoys playing against Embiid, as he went bonkers in their other matchup this year: 27/13/12.

Returned to action and played 16 minutes. I blame Newton for everything. Gravity got Isaac injured and the laws of motion propagated the hype train in the offseason.

Played 31 minutes and is averaging 26.6 since the beginning of the month. All Ross does is deliver the goods….for cheap.

Just a guy that helps you win. 86th player according to BM for the season. Over the past seven games, Aminu is the 38th player. He plays a ton of minutes and provides threeecolas, rebounds, some points, and steals with low turnover rate.

Played 35 minutes. So frustrating because this is what Nurkic can do. He just doesn’t do it on a nightly basis. Maybe he needs to watch more Nike commercials?

Damian Lillard produces heat on the court, while Dame Dolla spits fire off it.

Aaaaaalllmost messed around. Everyone take a knee and bow down to the King.

Played 24 minutes. Just continues to do what he do.

Still in potential phase. Ingram is barely a top 200 player for fantasy.

Got the start and played 32 minutes. Rajon Rondo played 16 minutes. This is how I think the minutes distribution will be for most of the season. I’m bullish on the fantasy prospects for Ball.