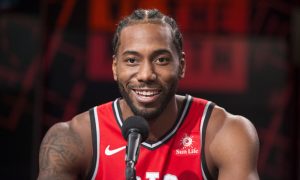 There was a lot of crying going on yesterday. And it started at precisely 12:00:01 am, as cries of joy echoed for the start of the new year. At the same time, there were countless cries of disappointment, as guys (too many to be honest) tried to kiss their NYE dates and got denied. There were cries of the sexual passion variety, and cries to the Porcelain God. Cries of pain for trying to get back into shape, and cries of elation from the millions of couch potato football fans. But, the biggest Kawhi came from Toronto, as Kawhi Leonard did this to the Utah Jazz:

A career-high! Over the past six games, he’s averaged 31.3 points, 1.2 threeecolas, 7.5 boards, 1.8 dimes, 1.2 steals, and been the #15 player in fantasy. He’s had a usage rate of 33.5! I was so wrong about Kawhi in the offseason, as I had my doubts about his health and mental motiviation. Well, I just want to scurry to the corner and sit on the stool with a dunce cap and Kawhi. The only blemish has been the decrease in blocks. Currently, he’s averaging 0.5 per game. The last four seasons, Kawhi has averaged 1, 0.7, 1, and 0.8 blocks per game. I think that number ends higher, but even if it doesn’t, I won’t shed a tear for his owners, as (outside of injury) he will still likely be a top 10 player for fantasy.

Holy F’ing Shit! Maybe I should’ve put Nurkic as the lede. It probably would’ve been the right move, but I spent too much time on the Kawhi one that I’d literally cry if I had to delete it. Anyways, the numbers truly do speak for themselves. First dub-dub of the season, tied a career-high in steals, set a new career-high in rebounds, and was one off the career-high in blocks. Over the past four games, he’s been the #15 player. Now, he doesn’t bring it every night, which is frustrating, but this is what the ceiling looks like.

You know I want to bring out Dame Dolla, but I can’t due to the poor shooting efficiency. Regardless, Lillard is still the #11 player on the season, even though he’s been the #55 player over the past four games. Is Lillard an underrated superstar or nah? I’m not sure because I have Lillard-tinted glasses on.

Played 22 minutes after playing 20 the prior game. Not fantasy relevant unless you need threeecolas, as he’s averaging 2.3 over the past eight games.

Puff, puff….puff. No pass with this Nemanja but the 16 boards were a career-high.

You either make the recap if you’re amazing or what Cauley-Stein was last night. Happy New Year!

The shooting efficiency fluctuates from time to time, but my Buddy does deliver threeecolas and rebounds. When he shoots well, he’s a top 60 player.

Played 36 minutes off the bench. If the next Rocky movie doesn’t have BogBog in it, I’ll be very disappointed. He looks like he should be in the ring and he’s got the mentality for it as well. Dude is tough as nails and doesn’t get fazed. He started the game shooting 1-for-9. You do the math.

Continues to start and played 27 minutes. Kornet has started the last three games and been a top 25 player. Coach Fizdale can switch up the lineup at any time or Kornet could hit a wall and start sucking, but until then, you ride him because it makes the most sense for him to be playing.

Played a team-high 39 minutes. Knox can flat out score. I’m intrigued to see how he operates next to Kristaps Porzingis.

On the season, he’s a top 170 player, as he doesn’t excel in any one category, but can access ceiling games once in a while to keep you singing his name.

Played 20 minutes off the bench. Kanter is a dub-dub machine when he plays. We just have no idea when or if he will play.

It really is a Jokic how good Nikola is. Just messing around for another trip-dub. It’s weird saying this, but if he were more selfish or did not make the right play as often, his fantasy numbers would probably be higher.

Returned from injury and played 22 minutes off the bench.

Also returned from injury and played 20 minutes. Aw schiznitz. The Nuggets are getting healthy.

Played 30 minutes. Over the past five games, Beasley has been a top 20 player, averaging 18.4 points, 3.2 threeecolas, 4.2 boards, 2.4 dimes, and 1.8 steals. The return of Harris could affect his minutes going forward, or Juan Hernangomez could be the most negatively impacted. Keep an eye on how Malone decides to allocate the minutes. My initial thought is that Beasley and Monte Morris are playing too well to get their minutes cut.

If only he contributed more in the D stats and didn’t turn the ball over so much, Blake could be a top 25 player, instead of the top 50-60 one he is. I know, I know. I must be fun at parties.

Had 12 straight dub-dubs before last night’s debacle. Definitely was not a Dre Day.

The Pistons got blown out, but I didn’t even need to look at the score to know that. Khryi Thomas and Luke Kennard played 20 minutes each. That’s all the information I needed.

Only played 26 minutes. As I just wrote, Khryi Thomas and Luke Kennard both played 20 minutes.

Over the last three games, Middleton has been a top 25 player. Buy low window is now closed.

Returned from injury and played 35 minutes.

The Sixers are Embiid’s team, so Simmons and Butler have to adjust to the New World Order. It’s going to take time. Butler has a usage rate under 22, the first time that’s happened since 2014.

Danilo Gallinari and Tobias Harris both scored 21 points on 7-of-15 shooting. Awwwwww, so cute. I used to enjoy those Doublemint gum commercials. I guess this would’ve been the male version.

Played 21 minutes off the bench. Why exactly is Marcin Gortat starting and playing 22 minutes again?

Played 31 minutes off the bench. Sweet! Been a top 75 player over the last seven games.

Played 27 minutes. Has been consistently a top 100-110 player this season, providing points, boards, and blocks. He just doesn’t get enough minutes to access a ceiling.

Siakam has cooled off from blistering levels he was producing at to start the year. I believe he was top 25 or 30 early on. Over the past seven games, he’s been more like a top 85 player, as the blocks and field goal percentage are down. With that said, he’s still averaging 34 minutes, 17.1 points, 0.9 threeecolas, 8.3 boards, 2.6 dimes, 1 steal, and 81% from the free throw line on 4.6 attempts. MIP without a doubt.

Played 22 minutes. Since returning from injury, Powell has been averaging over 21 minutes, 8.2 points, 0.8 threeecolas, 2.5 boards, and 1.5 dimes. Nothing spectacular and probably not fantasy relevant outside the deepest of leagues, but it’s worth talking about because he’s carving out a niche which could have a ripple effect on others.