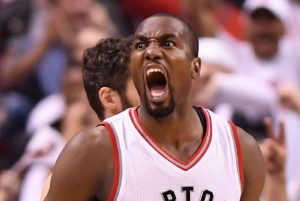 I often reminisce about the 2011 Oklahoma City Thunder squad: Kevin Durant, Russell Westbrook, James Harden, and…..Cole Aldrich. I kid, I kid. Serge Ibaka aka I-block-a…aka Air Congo….aka Serge Protector was a freaking animal, blocking over 3.7 shots a game and grabbing 7.5 rebounds. Man, that team. One of the greatest video game teams of all time? Anyways, Ibaka was raw from an offensive stand point, but was a maven on the glass and defensive end of the floor. If he could hone his offensive game, we were looking at the next superstar. The athleticism was that profound. Well, he did ascertain an offensive game and extended his range out to beyond the arc. Unfortunately, the rebounds went down and the block numbers cratered to the 1.3 mark set last season. He lost a lot of that dog, as he preferred to just chill on the perimeter and shoot jumpers all night. Well, it looks like Bow Wow made a visit because, so far, Ibaka is grabbing more rebounds (over 7 for the first time since 2014) and the blocks have ticked back up. We will never see the 3.7 level again, but any increase is a good increase. We are not here to talk about the blocks and boards, though. We are here to talk about the scoring Serge Ibaka exhibited last night:

A career-high!!! And he wasn’t just camped out outside. He was running in transition and making hard cuts to the basket in the half court. Ferocious dunk after ferocious dunk. Now, he may not start every game, as Jonas Valanciunas will likely go up against bruisers, but he should consistently get around 28 minutes regardless, as Coach Nurse does like play small-ball with Ibaka at the 5. I think a huge change for Ibaka this season is the fewer attempts from downtown. It’s allowed him to shoot a higher percentage from the field and gets him more involved for rebounds, as he’s not just spectating on the perimeter. Don’t ever expect any assists from him, but points, rebounds, and blocks with good percentages are on the menu. Ibaka is currently the #36 player according to Basketball Monster.

Just a G messing around on a Sunday afternoon.

Beep. Boop. Bop. The Stocktonator also messed around yesterday, as G was one of it’s favorites.

The Bucks beat down the Kings, 144-109, so G was the only player to receive 30 minutes of run. 13 players saw the court, with Matthew Dellavedova (8 min) and Sterling Brown (8 min) the only two to get less than 10 minutes.

Warm it up, Khris! His poorest shooting performance so far in this young season. Still, has scored in double-digits in all nine games. I always think that Middleton is the most underrated player in fantasy. Did you know that he’s #22 according to Basketball Monster?

Class, what have we learned about the Kings this semester? Nemanja Bjelica (21 min) and Willie Cauley-Stein (19) do not play in blowouts. On the flip side, it’s usually Marvin Bagley III who gets all the garbage run, but….

Played 24 minutes. Is a top 50 player for fantasy.

The assists are lovely at 7.6 per game, and he’s shooting 49% on 13.3 field goal attempts. If he can increase the free throw percentage and limit the turnovers, top 50 player could be a possibility.

Only played 10 minutes due to foul trouble. That’s back-to-back games in which he’s played only 10 minutes due to being a hacker. Others are probably just calling him a hack. I still like Vonleh and won’t be worried unless his role is changed.

Got the start again and played 26 minutes. The ideal b&b player, Robinson has gone 7-for-8 from the free throw line in his last two games! I think the ceiling is high for Robinson, and it’s very encouraging that he’s established himself so early.

Played 24 minutes and exited the game due to a back injury. Seven out!

Did his damage in 24 minutes. Even though he’s coming off the bench now and the minutes have decreased, Kanter is still a double-dub machine, albeit one that sputters often. Now that I think about it, he reminds me of the printer I have at home. Works well when the ink cartridges are full, but splotchy when they get depleted…and those things get depleted quickly and often. I’m in the wrong business.

Super Mario played 25 minutes, the most in six games. He could get more run due to the Hardaway injury, but doesn’t look to be a long-term asset.

Played 31 minutes. Morris is a serviceable big man, as he can provide some threeecolas, points, blocks, and rebounds. He is just so inconsistent and the five dimes were an outlier.

Played 31 minutes after getting 23 minutes in his first game back from injury. How funny would it be if Dwight was the one to turn the Wizards season around?

Got the start because Otto Porter Jr. did not play and received 24 minutes of run. Otto has a toe issue, so more starts could be coming. Oubre will jack up shots, provide threeecolas, and grab boards.

Proof that money allocated for the Wall was well-spent.

The long-range calibration on the BB gun was off, yet the production was still there. Great all-around game provides a high floor and is the reason Beal is the 29th player according to Basketball Monster.

Played 27 minutes and is another player that benefits from the Otto injury. “Life is like a box of chocolates. You never know what you’re going to get.” – Forrest Gump.

Played 41 minutes! Life is indeed like a box of chocolates. The difference between Jeff Green and Aaron Gordon is that we actually have expectations for Gordon. The ceiling is sky-high for Gordon, but the floor is his vertical leap turned upside down. I hope he gets to the penthouse because I envision it to be a most beautiful thing. Probably won’t be this year, though.

I think this is the first time I’ve written up Augustin this season. What’s the expression? A broken clock is correct twice a day?

Fournier had been struggling with his shot, but he’s gone 14-for-27 in the last two games. He will provide some steals (six in the past two games), dish out dimes (4 per game), and give you threeecolas and points. He has a 25 usage rate for the season, so that provides a relatively decent floor. Don’t fret when he’s not shooting well. His role is secure that he will shoot his way out of it.

Played a season-high 31 minutes. Here are the point totals for the last four games: 17, 7, 17, and 7. If SAT prep taught me anything, it’s that the next game Ross will score 7 points. Ross’s production and minutes allocation are all over the map, which mirrors the experience of shopping at Ross. He can fill up the stat sheet across the board or deliver morning bagels.

When I re-acquire that DeLorean I sold on Craigslist four years ago, the first thing I will do is go back to the summer and delete all the things I wrote about DeMar and bump up his ranking….a lot.

Played 32 minutes, primarily due to the foul trouble for Bryn Forbes. Mills is a 3-and-D player without the D.

Rudy Gay did not play due to a heel injury.

I may have to start calling him Ario soon because he’s definitely not bringing the D. Now that I think about it, he never did bring the D much. Hmmmph. Anyways, the shot attempts are down and shooting efficiency is at a career-low. Unless there’s an injury, I think he shoots his way out of the slump.

8 shot attempts. Crazy! Probably saving his “shots” for the after party.

So, with Ben, you’re essentially punting three categories: threeecolas, free throw percentage, and turnovers. As a result, he’s the 94th player according to Basketball Monster.

He went to Jarrett!

LeGood. Has a 26.7 usage rate on the season and has been unreal breaking down defenders on the perimeter and finishing at the rim.

Played only 22 minutes, but continues to be a contributer in points, dimes, and threeecolas. Unfortunately, no D stats and the minutes fluctuate.

Played 36 minutes after playing 35 and 36 the prior two games. This Temple is not pristine, though, as he is a thief and will contribute some steals. He will also provide some threeecolas and rebounds. Don’t expect much else.

Played 28 minutes. This is the second time in the past week that I’ve written up Mack.

He’s shooting 14-for-21 the past two games and has played 28 and 33 minutes. Who am I to question a Mack? If he continues to get the minutes, Mack could score in double-digits, dish out around 4 assists, grab a couple rebounds, and get his 211 on.

Played 29 minutes, a season-high. The shot attempts and makes were both season-highs as well. A true 3-and-D player, Brooks will provide some steals, but not much else. The minutes probably won’t be there to make a significant fantasy contribution.

Going up against Marc Gasol is a tough assignment, but it’s nice to see Ayton contribute in the periphery categories. He’s currently the #27 player according to Basketball Monster.

Played 35 minutes. He’s baaaaack. I’ve been really impressed with the development of Booker. We know he can score, but the assists continue ticking up. Now, he needs to work on the D stats, lower the turnovers, and increase the shooting efficiency.

Whoopsie. An Okobo on my part. I thought he had a chance to crack the starting rotation, but he’s still young and the coaching staff prefers Isaiah Canaan manning the fort. Only played 14 minutes and can be dropped.

Played 26 minutes, while Josh Jackson only played 13 minutes. Keep an eye on the minutes, as Bridges may be carving out a little niche for himself.

The Timberwolves lost, 81-111, to the Trail Blazers. Jimmy Butler and Jeff Teague did not play.

So that’s why Thibs never gives him run.

Par for the course. The uptick in steals has been nice, though. I give credit when it’s deserved. Now, back to your regularly scheduled programming: Bashing Wiggins.

In 23 minutes! Impressive until you realize it was against KAT.

Things got so bad for the Timberwolves that Meyers Leonard made an appearance:

The Raptors were up 42-17 after the first quarter against the Lakers! Crazy. And Kawhi Leonard didn’t even play! The Lakers did make a comeback at the end to make the score a respectable 121-107, but we shall never forget the Book Of Toronto 42:17.

Played 34 minutes. After languishing in the 20 minutes to begin the season, Siakam is now entrenched in the starting power forward spot. Elite field goal percentage, points, rebounds, and steals are what you will get. No dimes and the free throw shooting is poor. Surprisingly, the block are not plentiful at 0.6, but I could see that number ending up much higher.

Lowry has been unbelievable to start the season. He’s shooting a blistering 51% from the field and dishing out 11.2 dimes a game. Currently, he’s the #11 player according to Basketball Monster. Beep. Boop. Bop. The Stocktonator was all over Lowry, not literally of course, as it had him as the #2 player yesterday.

Played 32 minutes and led the Lakers in scoring. Kuzma will grab some boards and provide threeecolas, but not much else. The sub-1 turnover rate helps elevate his value.

Only played 17 minutes. Was a minus-24 on the night and helped contribute to Ibaka’s huge night. The Lakers are set to sign Tyson Chandler. Ivica Zubac has played some decent minutes backing up McGee, but there is no one else. How much will Chandler play? He’s 36 years old, but he was averaging close to 25 minutes a game the last three years in Phoenix. If he gets some run, that takes some of the shine off McGee. With that said, he should still contribute at a high level.