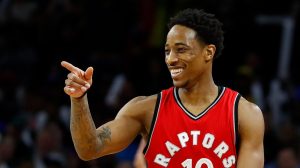 I met my wife back in 2003. We instantly became rascally, rabid rabbits. Then we got married and decided to do what rabbits do, which is make more rabbits. 15 years and two kids later, the only things that are rascally and rabid are the kids. The honeymoon and honeymoon phase ended a loooooooooong time ago. With that said, every once in a while, a date night is needed. To reminisce. To indulge. But, most importantly, to appreciate. Last night, DeMar DeRozan delivered a 40-burger.

Earlier in the season, it seemed like he was dropping 40 burgers on a nightly basis. I wrote him up multiple times and he was all the rage. But then things started to get stale. The production waned off a bit. There was no way he could sustain the insane stretches that he was putting together. As a result, we started to forget about him and take him for granted. Last night was date night for DeMar. To make us reminisce. To make us indulge. And, most importantly, to make us appreciate.

Anthony Davis injured his ankle and is scheduled for an MRI today. Whoever had March 7th…..You win. 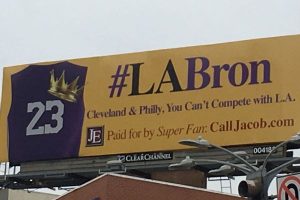 Played 37 minutes. Everybody Nance now! I’ll be very, very sad and disappointed if Mr. Kardashian takes his minutes when he returns from injury.

Played 34 minutes. No Jokic! This should be the line every single night.

Has been the most consistent Nugget this season. So solid and contributes in all but blocks. Top 25 player for fantasy.

I like Gordon. Is basically (B) lake Griffin 2.0. Maybe not as good of a passer, though. Anyways, a thought just went into my head. I feel like this is close to a ceiling game for Gordon, which would be like a floor game for Giannis. Not a knock on Gordon at all. More about Giannis. Just wait until you see what I wrote in G’s blurb.

Good night to be named Nikola. Love his game. Too bad he missed so much time this year. He looks primed for a huge end to the season, though. If you own him, hopefully you are still in a position to take advantage.

Played 35 minutes. Such a strange season for Lopez. There was a time during the season in which he wasn’t even playing. Still trips me out the trajectory his rebound numbers have gone over his career. 8.1 his rookie year. Now? 3.8. Talk about business decisions. I guess it’s only fair to take away his B, since I do the same for Lake. Rook it is.

Played 26 minutes. A perfect microwave for the Lakers off the bench. Getting minutes and shot attempts, but……last four games? 9, 7, 7, and 6 assists.

Rudy! Rudy! Rudy! Has been en fuego lately. Over the last couple of weeks, has been a top 10 player for fantasy.

Took some time, but the melding of Rubio and Donovan Mitchell has finally yielded that Valyrian Steel. Both players had a usage rate over 30 last night.

Almost a top 50 player for fantasy on the season! Pretty crazy. Imagine if he didn’t play for one of the more deliberate teams on offense.

Played 28 minutes and looks to be the main guy off the bench. Not the most consistent player, but can stuff the stat sheet.

Jingle bells. Batman smells. Robin laid an egg. Ha! I miss singing that song. Anyways, Jingles usage rate has plummeted with the return of Rubio, but he contributes in the periphery categories. That makes him a useful fantasy asset. Just don’t expect ceiling games. With that said, I expect some triple-dubs in the near future.

Imagine you’re a teenager that’s scrounged up enough money to buy a hooptie. It’s a ride, so that’s good. Unfortunately, it’s not the most predictable vehicle. Pick up that girl for a date? Car won’t start. Hmmm, that could possible be a good thing. Will write that down in the notebook that I plan to pass down to my son. Anyways, of course the ride works when errands need to be run. That’s been the Myles experience this season, so of course he balled out against Rudy Gobert.

The Pacers scored 84 points. No more blurbs for you!!!

17 wins in a row for the Rockets! You know what’s just as impressive? The Rockets go on the road for a back-to-back in OKC/MIL and come out victorious with double-digit wins in both. You know what’s even more impressive than that? Harden has 4, 4, and 5 steals in the past three games. I’m getting Harden excited looking at his game logs.

Played 33 minutes. Has now played four games since missing four due to injury. Looks to be rounding into form.

I can’t wait to watch G single-handedly lead Greece to the Olympic gold medal in Tokyo.

One of the most underrated players in fantasy.

Played 27 minutes. What can Brown do for you? Well, he can shoot the 3 and finish strong at the rim. He will grab some boards and play good D. Why he doesn’t get more minutes is beyond me. Let’s see. Tony Snell got 25 minutes of run and shot 1-of-4. Snell sucks. Jason Terry played 30 minutes. He’s 40 years old. The Bucks went with an eight-man rotation last night, but I’d keep an eye on Brown’s minutes going forward.

Played 25 minutes. I thought there would be a chance that the Bucks start giving him 30 minutes of run a game. That could still happen, but it looks like 23-25 minutes is the range for now.

It finally happened! After being meh for the entire season, even though he was getting close to 30 minutes of run a game, Brooks finally delivered and scored a season-high. He has now scored at least 20 points in back-to-back games for the first time all year. Is this a trend? Definitely possible, as the volume has always been there. Maybe he’s more confident or things have started to click. We shall see. With that said, keep in mind that the Grizzlies had six players sit due to injury.

Got the start at point guard and played 28 minutes. Will probably go back to the bench when Andrew Harrison returns.

Played 30 minutes and continues to start at center. There could be some concern that the NBA forces Robin Lopez to play more, but I think Portis’s minutes are secure. By the way, it’s ridiculous that the NBA is getting involved with start/sit decisions, especially since the Bulls were playing their best players.

Played 32 minutes. I was a little worried that Cameron Payne would eat into his minutes, but then I came to my senses and remembered that it’s Cameron Payne.

Played 33 minutes. Inconsistent, as he’ll drop 20 one night and score 4 the next. I’m very curious to see what his ceiling is, if that ever comes to fruition.

Cannot reach his full potential until Dirk retires, but the future looks bright.

Played 17 minutes. The NBA is just messing up the whole program. With Holiday starting, Denzel Valentine (21 minutes) and David Nwaba (24 minutes) get screwed for playing time. More importantly, how does this affect Jrue Holiday? The Matrix will no doubt have to expunge whatever it put into Jrue and now give it back to Justin. I guess we will find out when I get to the Pelicans blurb.

Received the start at small forward and played 28 minutes. In one game, he totaled the amount of run he received in three games combined. In fact, Powell played a total of 35 minutes in the month of February. You get where this is going? No need to storm the waiver wire beaches for this one.

Played 31 minutes. The Jonas Rules. Play against teams that stay big. Also, play against DET. Back in January, JV went 17/16 against the Pistons.

Such a beautifully efficient line. Sand is getting in my eye right now.

Played 28 minutes. I prefer him over Poeltl, but that’s not saying much. The minutes are just too inconsistent.

Played 18 minutes. The blocks are nice and he has the potential to stuff the stat sheet. Just so inconsistent, in both production and minutes. Do you like to live dangerously?

Yo! B is back! To what do we owe this pleasure?

Played 39 minutes. Has scored double figures and attempted at least 10 shots in 12 straight games. Will grab some boards and get the occasional steal, but it’s all about the 3s and shot attempts with Bullock.

The dimes have plummetted since (B) lake arrived to town. Has not dished out more than 2 since February 5th. (B) lake came to Detroit January 30th.

Got the start at small forward and played 31 minutes. Stanley Johnson was out due to injury, but it could be about that time to see what the rook’s got. Could be a potential streamer for 3s. If he continues to get significant minutes, let’s see if he can contribute in the boards, dimes, and D categories.

Played 36 minutes, but was replaced by Kennard in the starting lineup. I’d imagine that Ennis will cede time when Stanley Johnson returns from injury, because we know that SVG loves him some Johnson.

I told y’all. The Matrix can’t handle two Holiday’s playing at the same time. Or….maybe it was due to the back-to-back, and three-in-four games.

Did not start, but played 31 minutes. Damn, what a game. Granted, it was the Kings but still. I think he’s best suited being the guy on the second unit.

Got the start at center and played 20 minutes. Willie Cauley-Stein was out, so Kosta got the run.

Skal Labissiere came off the bench and got 28 minutes of run.

Getting the run and showing he can contribute across the board. Why is Zach Randolph still getting 26 minutes of run?

Played 31 minutes. I thought Vlade was running away with the bet he made with Vivek, but Bog has hit a wall or entertained the company of some shady individuals. Regardless, Vivek is back in the thick of things with his Buddy playing well. USA! USA!

Who do you like out of the following for at least the first round next week?