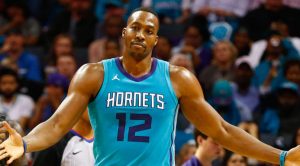 Back in 2004, Dwight Howard was an affable kid with human heads as shoulders. Selected #1 overall by the Orlando Magic out of Southwest Atlanta Christian Academy, Dwight looked to be the next superstar of the NBA. Look was an understatement. He averaged a double-dub, played in every game his rookie season, and was named to the All-Rookie Team. The next three years, Howard got bigger, stronger, and led the Magic to the playoffs. In 2008, he became Superman when he donned the cape in the dunk contest. All was good in the world of Dwight. But then things began turning the other way. The Magic couldn’t advance in the playoffs and the league started to employ the Hack-a-Dwight, due to his atrocious free throw shooting. Then, in 2012, he asked to be traded, tried to get his coach fired (allegedly), but ended up signing with the Magic and hugging his coach. Huh? It got worse, though. Dwight had back surgery and missed the rest of the 2012 season. Then, asked to be traded to BKN, but got shipped to LA instead, where Kobe ripped him a new one. Houston for three years, then Atlanta, then finally Charlotte. I can’t wait for the ESPN 30 for 30 on Dwight, but I’m not writing about that. I’m writing about that fact that Dwight went:

The first 30/30 game since Kevin Love accomplished the feat in 2010. Harvey Pollack, the Sixers’ Director of Statistical Information back in 2010, told John Hareas of NBA.com that “there have been 131 30/30 performances.” Wilt Chamberlain did it 103 times! Ha! Well, add Dwight to the list.

The Sixers were up by 30 after three periods, but then the Grizzlies made a “spirited” comeback to make the final score 119-105. As a result, only Marco Belinelli played more than 25 minutes. Dario Saric, Robert Covington, JJ Redick, and Belinelli all scored 15 points each. Joel Embiid went 14/7/4, while Ben Simmons went 13/7/9.

For the Grizzlies, 12 players received double-digit minutes. No one, and I mean no one on this team can be trusted for fantasy production. An impressive tank job so far, but according to Tankathon.com, MEM is in a battle for ultimate futility.

Played 34 minutes. Beasley will get 30 minutes of run for a few games, then inexplicably play 20 minutes. It is said that octopuses have multiple brains and that each tentacle literally has a mind of its own. That’s the only way I can describe the front office of the New York Knicks.

Played 31 minutes. Tentacle #2. At least with Kanter, even if he gets 20 minutes of run, he’s more than capable of double-dubbing in points and boards.

Played 20 minutes. What are the Knicks saving him for? Give him run so that he can develop and gain experience!

Played 26 minutes. Is a bonafide scorer. Maybe too good, perhaps? Not getting consistent run, so tough to trust.

Bam Adebayo got the start at center, but only played 13 minutes and scored 6 points with 2 boards. Kelly Olynyk played 30 minutes.

I think it’s safe to say that Kelly is the best man for the job.

Played 27 minutes. It was the Knicks. With that said, TJ has a high floor, but will rarely access the ceiling.

Played 27 minutes. It’s been 12 games since Millsap returned from injury. He’s been productive and has contributed across the board on a nightly basis. Just nothing spectacular. I’d expect more of the same going forward.

Nuggets defeated the Bulls 135-102. No player on DEN played more than 29 minutes. Wilson Chandler went 19/5/3, Will Barton 16/3/5, Nikola Jokic 21/7/5, and Jamal Murray 16/5/7.  DEN is two games back in the loss column for the eighth and final playoff spot, so expect plenty of run and production from Nuggets players going forward.

Nine players received at least 20 minutes of run. Paul Zipser, who sucks, only received 18 minutes, but got the start at power forward.

Led the Bulls with 28 minutes of run. In fact, over the past five games, he’s played 28, 30, 30, 24, and 30 minutes. Here’s the thing, though…..he kind of sucks. Falacio? Felicio? Ha! Anyways, to be fair, he has scored double figures in three straight and has one double-dub over the five-game span.

Played 24 minutes. One night he’ll be smoking like Denzel Washington. Unfortunately, most of the time he’ll be a blind cupid shooting arrows.

Played 23 minutes. Such a Payne.

Played 24 minutes. What’s the expression? Throw shit against the wall and see what sticks?

Dude’s a chucker. 10, 12, and 14 shot attempts in the past three games. What’s that expression again? Throw shit against the wall and see what sticks?

Thad is the annoying “hot chick.” Looks so fine, but…..something is always off.

He’s really going to do it to me, huh? Ball out to end the season so I get all giddy in the offseason and rank him higher than I probably should. Back-to-back games with 2 blocks and 15 shot attempts. The Odometer looks to be working fine.

Played 31 minutes and is now back in the starting gig. Can put up the occasional big game, but IND is still the Oladipo show.

Played 35 minutes. Dipo has ceded some usage to Collison, but the drop has only been from the 30s down to the 26-28 range. The one category that has and will take a big hit is in the assists. Without Collison? Assist rate in the high 20s to low 30s. The past two games with Collison starting? 15 and 0.

Played 34 minutes. Has the potential to deliver this kind of performance on a nightly basis because he gets the minutes, the shot attempts, and defenses are focused on AD, Jrue, and Rondo. But, as my momma told me all the time when I was younger…..Potential don’t mean shit. To be fair, he’s scored double-digits in seven straight, but barely.

Played 20 minutes, while Emeka Okafor played 9 minutes. That’s now three straight games that this scenario has played out like this. Cheick please!

Played 28 minutes. Getting the run and opportunities. The production should follow. Just don’t know when.

A true double-dub. The Bucks are one of the worst teams at defending opposing centers. Truly a match made in heaven for DJ.

Played 11 minutes. Montrezl is a per minute monster. Andrew Tobolowsky of Fansided.com broke it down. Seriously, why doesn’t he play more? I just don’t understand some professional coaches and general managers.

Giannis Antetokounmpo left last night’s game in the second quarter due to a sprained ankle. The Bucks next play on Friday in Chicago. I have a sneaky suspicion that G will be chillin for that one.

Played 30 minutes and entered the game for G when he went out. Should be in line for a minutes and usage boost. Man, that matchup with Chicago looks mighty juicy.

Played 14 minutes. Probably nothing, but could be something. Shabazz has always been able to score. Maybe he slides into Jabari’s role if Jabari slides into G’s role.

Jeremy Lamb got the start again for Nicholas Batum and played 33 minutes.

Played 28 minutes. With the Batum injury, everyone on the line moves up a spot. While bacon is delicious, Bacon is kind of atrocious.

For the Brooklyn Nets, all nine players received over 20 minutes of run.

Still loading…..possibly until next season.

Last three games: 8, 7, and 8 attemtps from downtown. Carroll has been really solid. Gets the minutes, opportunities, and contributes across the board.

Only one time in the past 13 games has LeVert had a usage rate under 20%.

Uh….maybe we need that Wall after all.

Played a team-high 34 minutes. Has been underwhelming and inconsistent, but this is what he can do. Like my momma used to always tell me….Potential don’t mean shit. Gotta do it and on a consistent basis.

Has had a usage rate over 30% in seven straight games. No laughing matter.