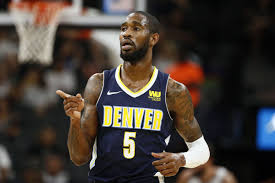 When I saw Will Barton‘s line from last night (37/2/3/3/0/3), I immediately knew that he would be the lede for this post. It didn’t take me long to get to Will I Am, then to the song T.H.E, then….I watched the video on YouTube and listened to the lyrics, then thought to myself, “This is terrible. No wonder I never liked Will I am.” But….there’s always a but. Something good. No, something magnificent arose from the endeavor. See, in one of the early lines of the song, Will I Am says, “Imma go hard, hard to the core. Hard like motherf***in liquid swords.” I was immediately tranferred back to my tree smoking days, listening to Wu Tang and the GZA. Liquid Swords. One of the greatest songs of all-time.

So good. Anyways, with the plethora of injuries that the Nuggets are enduring at the moment (Millsap, Jokic, and Chandler), Barton is going to continue hoisting up a ton of shots and get plenty of run each night.

With The Process paused, Amir Johnson received the start and played 22 minutes.

It was a solid performance by the Amir, but 7, 8, and 9 did not appreciate the discrimination.

Orale Holmes. It’s too bad that Holmes and Johnson split the minutes when The Process sits, but it is what it is.

TJ McConnell did not play, so Jerryd Bayless soaked up his time and played 32 minutes.

I’d like to submit a new word to the world: Kyrieving. Verb. Definition: clowning defenders on flat surfaces. Use in sentence: Did you see Matt Kyrieving the F out of that dude? #14 was straight Kyrieving the opposition.

The 28 minutes were a season-high. Morris has also attempted 11 field goal attempts in back-to-back games and scored in double figures. He’s inconsistent and pretty meh, but if he’s going to get close to 30 minutes and possibly provide a double-dub, there’s value in that.

Warm it up, Kris! Call 911 because someone’s on fire! 9-of-11 and 10-of-16 shooting the past two games. If you think that’s going to continue, though, then I better summon the paramedics.

The Markkman led the Bulls in points and shot attempts. Maybe the Bulls did know what they were doing after all………Naw.

Kenneth Faried got the start again with Paul Millsap out and played 22 minutes.

The resurection of the Manimal. As long as he starts, you play him or he will rumble into your home and electrocute you Blanka-style.

Nikola Jokic left the game due to a sprained ankle. Still waiting on the X-rays, but it didn’t look good. Trey Lyles, Faried, and Mason Plumlee should all see an uptick in minutes.

Received the start and played 23 minutes. I really wish I could say, “Thanks for playing, but….” Please scroll up to the above GIF of my panda bear friend.

The kids in the neighborhood were getting worried. Mommy, they asked, is he alive?

Double-digit points in five straight games and 20+ minutes in seven straight games, with one 37 minute performance mixed in. Who’s this Dwade guy think he is? He’s been a vital piece during the Cavs 10-game winning streak. Don’t shoot your load too soon, fellas.

Iman Shumpert underwent knee surgery and will be out 6-8 weeks. He wasn’t playing much anyways, but I always have to pay respects to the Iman.

John Collins left the game early due to a left shoulder injury.

Ersan Ilyasova, Luke Babbitt, and Mike Muscala (when healthy) will get an uptick in minutes. Babbitt played 18 minutes, while Ilyasova went HAM in 30 minutes.

Played 28 minutes. Outside of brief period when he was injured, Belinelli has been molto bene!

With Rudy Gobert out, Jerebko has been starting at power forward and doing a respectable job. He played 25 minutes.

Filling in nicely for Gobert.

With Rodney Hood, Raul Neto, and Joe Johnson out, it was Burks who received a huge uptick in minutes. Every stat category was a season-high. File it away in the memory banks for the next time the situation arises.

With Blake Griffin out, Montrezl Harrell got the start at power forward and played 21 minutes.

Sam Dekker played 20 minutes, so it looks like Dekker and Harrell will share in the responsibility of replacing Blake.

The starting backcourt for the Clippers was Austin Rivers and Lou Williams.

These two are going to be chucking a ton. DeAndre Jordan could be in-line for 20 rebounds a night.

Were they playing against each other? Looks like a heated contest to me.

Jason Terry played 18 minutes. Yo, Jason Kidd. You need to learn how to play poker better.

There’s the Nurk we all know and love. The six turnovers, though. He’s been very inconsistent to start the year, so hopefully he can start getting into a groove now.

Al-Farouq Aminu returned back to action.

Aminu is a solid pickup if he’s available, as he will contribute a little something across the board.