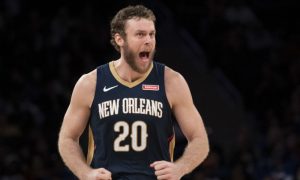 For the first five games of the season, Nicolo Melli played an average of 15.2 minutes per game, with a high of 20. He showed the ability to shoot from downtown, but little else. The first four games of November, Melli played 10, 10, 5, and 17 minutes. He was rotting on the bench. But then….

Nelli got the call on the celli to notify him that he would play 27, 27, and 28 minutes over the past three games. Did I just time travel there? Anyways, Melli has responded by scoring 14, 16, and 10 points with a decent amount of boards and dimes. What really stands out is three steals in two separate games. Who knew this Italian was a smooth criminal? Perhaps he’s mafioso? He’s been a top 60 player over the past four games. This could be a short-term thing while the Pelicans are banged up, or it could be the start of something. I may be able to time travel, but I cannot predict the future. Beep. Boop. Bop. You know what can predict the future? The Stocktonator.

He’s baaaaaaaaaaaaaack. Jacking up shots and playing no D. Melo got the start in his first game and played 24 minutes. In vintage Melo style, he sported a -20 +/-. If you are hard up for tres and points, then I guess you could give it a go.

Played 23 minutes off the bench, after starting the past few games. He’s the guy I’d want instead of Melo. The only question is the minutes. With that said, the Melo and Little are completely different players. Melo will provide points and tres, while Little isn’t the greatest shooter, although he will provide some tres. He will provide boards and defensive stats.

Damian Lillard did not play, so you know what time it is, right? Over the last two years, whenever Lillard has not played, C. J. has seen his usage rate increase 4.8% to 30.

Got the start for Lillard and played 36 minutes. The Blazers love him and are trying to get him on the court more, even going with three-guard lineups. With that said, from a fantasy perspective, Simons doesn’t provide much outside of point and tres.

Returned from injury and played 35 minutes. The usage rate was a robust 28.4, so he got right back to business. The Pelicans play at a top five pace, so the situation is ripe for fantasy. Prior to the injury, Ingram was a top 25 player for fantasy. Let’s see if he can continue the massive improvements in tres, defensive stats, and shooting efficiency.

Got the start and played 34 minutes….against Melo!!! The layup of all layups. He was owned around 3% on DraftKings last night. I get it, as he’s a low-usage, hustle type player, but M. E. L. O. makes everyone giggle and say hello. Now, he won’t get to play against Melo every night so what to make of him for fantasy. He can provide tres, boards and defensive stats, but the shooting efficiency is poor and, when the Pelicans get healthy, Williams will be relegated to the bench.

Played 35 minutes. Usage rate was 26.4 with Ingram. Not bad, but below the 31.4 the prior game. Top 50 player on the season, which is disappointing, but Jrue is back from Holiday and has been a top 30 player the past four games. It’s like people who put up Christmas decorations right after Halloween. It’s super early, but eventually the time will come.

Aaaaaaaaaaaaaaalllllmmoooossttt messed around. He’s the point guard for the Warriors now. LOL! The counting stats will be there, unless he gets injured or ejected, but the shooting. Oh, the shooting…..

Got the start and played 26 minutes. WCS has been balling the past four games. Like top 30 balling. With that said, Kevon Looney is expected to return soon, which will likely nuke some of that value.

Got the start and played 36 minutes. He has ceiling games like this from time to time. Unfortunately, he’s very inconsistent and is usually a zero instead of last night’s hero. He should get run for as long as D’Angelo Russell is out though.

Only played 24 minutes because he fouled out.

I like Paschall, as he’s already a professional getter of buckets. Unfortunately, he doesn’t offer much outside of boards.

Played 33 minutes. Crowder is a 3-and-D player who will more than likely hurt your field goal percentage. The 2.1 tres, 6.1 boards, 3 dimes, and 1 steal mitigate that somewhat. Just outside the top 100 for fantasy.

Played 26 minutes off the bench. Top 65 player on the season, despite averaging only 22.2 minutes per game. He’s the complete package, but would need an injury to truly make an impact.

Since that game against the Lakers, when he got pummeled by having to guard LeBron, Oubre has been a top 30 player for fantasy. The boards have ticked up, but it’s the 2.7 steals that have really elevated his overall value. For the season, he’s blocking 0.7 shots right now. If he can get that up to 1, then he will join the illustrious 1/1/1 club.

If he can ever contribute in the defensive cats, then Booker could be a top 20 player. As it stands, he’s more like a top 40-ish player for fantasy.

He lives! Played 26 minutes off the bench. The prior three games, Bridges had received 15, 13, and 15 minutes of run. His previous high in points was 10, which he accomplished once. The Suns were missing Ricky Rubio and Aron Baynes last night, so I wouldn’t expect this to be the New World Order.

Ricky Rubio only played 16 minutes due to a back injury. Tyler Johson started the second half for him.

Orale, Holmes! Top 50-ish player over the past few weeks. Holmes is providing points, boards, blocks, and excellent percentages: 59% from the field and 86% from the line.

He lives!! Last night was resurrection night. Joseph is a super low usage guard who will provide dimes and some boards with nothing else. You pray that he doesn’t shoot because he kind of sucks in that area.

A career-high in points and played 36 minutes off the bench. Luke Walton the Bobo can’t screw this one up, can he? We shall see when Fox and Bagley return. Regardless, that won’t happen for a while so enjoy the show. BogBog is the #3 player for fantasy over the past six games. The percentages have been excellent, so regression will likely take place in that area, but he’s contributing and will continue to contribute in every category except for blocks.

What’s the pool have for the date of Gallinari’s injury? Last night was a proud day for Italy.

Played 24 minutes off the bench. Steven Adams played 24 minutes. NBA plate techtonics in OKC. Slowly, but surely, the continents are re-aligning. I doubt he ever gets the full load, unless the Thunder trade him. Is Adams tanking it on purpose so that no other team has any interest? To be fair, he has been dealing with a knee issue, but still….Regardless, Noel has been a top 40 player over the past three games, providing boards, steals, boards, and excellent percentages.

He wasn’t a good neighbor with the field goal percentage, but Paul did make up for it with the dimes and steals.

Shai has fallen off from his torrid start to the season. The main culprits have been the increase in turnovers and plummeting field goal percentage. In addition, he doesn’t dish out many dimes. He’s young, though, and the sky is the limit. There will be plenty of turbulence on the way.

Played 30 minutes off the bench. Dennis was a straight menace to the Lakers last night, as he shot lights out from the field. He doesn’t provide much else outside of points and tres, but he averages 28 minutes per game and garners a usage rate in the high-20s. The main issue, though, is that he is often a menace to himself, with the inconsistent shooting and play.

He has now messed around against every single team in the Association! The turnovers and free throw shooting still keep his value down, but he also played 37 minutes last night and should continue to get plenty of run to collect all those fantasy goodies. Just stay healthy.

Got the start and played 23 minutes. A good, old fashioned block party.

Got the start and played 33 minutes. Played relatively well and converted his open looks. KCP should continue getting plenty of run until Avery Bradley is ready to come back.

Kyle Kuzma only played nine minutes due to an eye injury.

Played 27 minutes off the bench. If you dying for dimes, Rondo can provide, but at great cost.