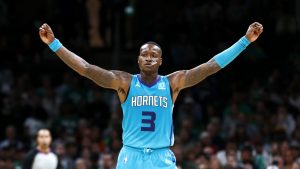 Terry Rozier has been a scary player for fantasy nerds since 2017. He shot 39% from the field that season on 10 attempts per game. BOO! We should’ve known, though, as he shot 36% from the field in 2016 and 27% his rookie year, but the athleticism was tantalizing. He’s young they said. He’ll develop they said. Just wait until he starts they said. Well, he started 30 games in Boston, and while the percentages did improve, the increase only took his field goal percentage from 37% to 39%. BOOOOO!!!! So why did we keep going back to Terry? Why do you slow down and gawk at an accident? There’s a chance you may see nothing. There’s a chance you may be horrified. But there’s also that chance you may see something you’ve never seen before. Well, Rozier scored 33 points in a game during the 2017 season and has messed around once in his career. Just wait until he becomes a full-time starter they said. Well, we are dummies and keep falling for the bananna in the tailpipe. In 10 starts as the man to replace Kemba Walker, Rozier was shooting….class? Yup, 38% from the field. BOOOOOOOOOOO!!!!!! But every once in a while, he accesses a ceiling game to keep us coming back for more. Last night was that instance…

In only 23 minutes! Imagine if he played 30 minutes. Imagine all the people. Living for today (ah ah ah). Imagine there’s no countries….What I didn’t imagine was JV abusing Cody Zeller in HD. Anyways, points, rebounds, and excellent percentages are what you get from JV. Get this man a varsity jacket!

Played 30 minutes for only the second time this season. I don’t get it. What I do know is that Ja is good. Like really, really good. How good?

Played 20 minutes off the bench. He’s averaging 18.2 minutes on the season and is a 3-and-nothing-else player.

Outside of the top 150. Do you remember when we walked 500 Myles for Turner at the beginning of last season? Well, we gonna have to walk 500 Miles for Bridges this year. He’s averaging 33.5 minutes, so no worries there. We drafted him for defensive stats, and those have been lacking. In addition, the free throw percentage has been awful, but he’s a decent shooter from the charity stripe. We walk 500 Miles and cross as many Bridges as possible before he inevitably cracks the top 100.

Got the start in this one and played 34 minutes. It’s happening!!!! And well deserved, as Graham has been balling out to start the season. Top 70 player. Now, the points, tres, and some boards should be there, but what impact will the move to the starting lineup affect his dimes? He should be fine but a slight downtick could happen, as he shares the backcourt with Rozier.

Played 29 minutes. It’s happening!!! Maybe not, as Dwayne Bacon didn’t play. In addition, the shooting efficiency has been lights out to start the season (48%). He shot 38% and 36% the prior two seasons.

What happened to the boards? He’s averaging 5.9 on the season after collecting 9.2 last season. LMAO! He’s turning into Brook Lopez sans the tres.

Continues to start and played 22 minutes. Talk about stayin’ in yo lane. I respect it.

I’ve been impressed with KAT this season. He’s always been a fantasy stud, but dare I say that he’s been exhibiting plenty of dog this year? He’s playing aggressively but also not backing down to anyone. Case in point, he and Rudy Gay got into a heated tussle last night and KAT stood his ground Me f’ing ow!

Played 23 minutes off the bench as Jarrett Culver got the start at point guard. He’s returning from a multi-game absence, so it will take a few games to get back up to speed.

He’s human after all. The only things that can stop him are himself and load management. Number 10 player for fantasy on a per-game basis.

Played 32 minutes off the bench. Green is money and can provide tres and boards. Unfortunately, the playing time could start coming down as Paul George returns to action.

Stop shooting tres!!! Russ was in foul trouble last night. That’s the understatement of the night. He committed four fouls in the first quarter!!! Ha! Anyways, on the season, Russ is still garnering a 30.6 usage rate, but he’s Robin to Hardman.

James gets me so Harden excited. That is all. #4 player for fantasy and has as good a chance as anyone to finish numero uno.

Got the start and played 23 minutes, as Eric Gordon will miss six weeks due to knee surgery. The answer to your question is: I wouldn’t but he’s going to play.

Some may be disappointed with Beal this season. Why? Undercooked? Overcooked? No reason to be worried about the Beal. The usage rate is 32.9 and all the counting stats are in-line with what we expect. In fact, the dimes have increased. With that said, it’s been the shooting percentage that has kept his value down. Beal has scored double figures in every game this season and has two 40-burgers so far.

The boards were nice, but Bertans is primarily a tres guy. He is averaging 27.5 minutes per game and is a top 100 player for fantasy.

Got the start and played 25 minutes. Robert Williams and Daniel Theis were not available. When everyone is healthy, the center position will likely be matchup dependent.

Played 20 minutes off the bench. The Celtics scored 140 points last night, so someone outside of Tatum, Kemba, and Jaylen had to score. Edwards can get hot, but doesn’t get enough run or shoot consistently enough to be fantasy viable.

Harris is a top 60 player but something is off. Free throw shooting, shot attempts, field goal percentage, and points are down, but steals, dimes, and boards are up. I got it. He’s shooting 21.7% from downtown, but the most discernible difference is that he is no longer with Boban. Bring Tobi and Bobi back!!!

My RichardSON has been disappointing, which makes me sad. The steals are there, but the blocks are a little light. So are the points, which makes sense because the shooting efficiency is a poor 41%. Barely a top 100 player right now.

That’s what I’m talking about, Aaron!!! He has this potential to mess around and contribute across the board every night. He just rarely does it. I still believe in you…I think.

Rounding into form and will re-enter the 1/1/1 club soon.

Played 27 minutes off the bench. Markelle Fultz only played 21 minutes, so even though D. J. is coming off the bench, he’s receiving similar, if not more, run than Fultz. A cheap source of tres and dimes.

Siakam is 25 years old, the #19 player for fantasy, and still has room to improve. He’s averaging 0.7 steals and 0.5 blocks. With his length and athleticism, it’s well within the range of outcomes that he gets to 1 for both cats. If so, then top 5 player for fantasy?

Played 40 minutes. With Kyle Lowry and Serge Ibaka out, it’s going to be the FVV and PS show. And it looks to be a hit. Don’t expect the excellent shooting every night. He’s shooting 35% on the year, which is probably too low, but he’s hovered in the 41% range the past three seasons.

Y’all ready? Here we go….Monday…..Tuesday….Wednesday…..Thursday….Friday…..Saturday…..Sunday….Rondae!!!!! Getting run due to all the injuries and will provide points and boards, but O. G. Anunoby isn’t expected to be out long.

Played 31 minutes off the bench. Getting run due to all the injuries. Not a great shooter, but Davis is very athletic and can contribute points, tres, and some boards.

Got the start and played 32 minutes. It was a successful venture into the Hood. It’s not always so smooth.

The Raptors have an excellent defense, but it was just one of dem days for Dame. Shit happens.

Played 27 minutes. Getting the run and is a professional getter of buckets, but Simons doesn’t contribute much else besides points and tres.

Snitches never get revenge. Did you know that the Lakers are tied for the best defensive efficiency in the NBA? Now you do. Russell is going to be a usage monster for as long as he’s on the Warriors. Is he getting traded? Or is he staying? What do you guys think?

REVENGE!!!! Ha! I kid. What a game, though, as McGee got the start and played 27 minutes. Yes, the Warriors are that bad.