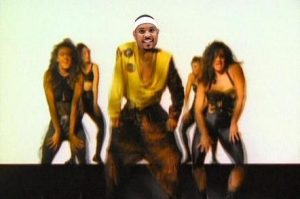 Doesn’t provide tres and the free throw shooting is poor, but damn, Bam is freaking amazing in everything else. Well, maybe not points, but I swear, everything else. 10.3 boards, 4.6 dimes, 1.5 steals, 1.4 blocks, and 57% shooting from the field.

Love was a thief last night! Usually it’s over hearts, but Love has a diverse game. He scores, drains tres, boards, dishes out dimes, and get his 211 on. The #20 player for fantasy. The only questions are can he stay healthy and will he be a Cav the entire season?

Only played 23 minutes. It was all a dream. I used to read Word Up! magazine. Salt-n-Pepa and Heavy D up in the limousine. Only the third game in which TT did not dub-dub. He should be fine, as he’s playing for that paper.

In six games as a starter, Parker is a top 25 player. We know he can score, but 1.5 steals and 1 block? What? What?! 2019 is a strange season indeed. For Parker owners, enjoy the ride until John Collins returns.

Hunter is locked in on the number 14, as he’s scored 14 points in a game now four times on the season. The rookie is playing a ton of minutes now: 34, 40, and 39 minutes. And he’s starting to take and make tres. But six steals? Not sure we can count on those but you never know. As I said, 2019 has been a strange season so expect everything, dismiss nothing.

Got the start and played 19 minutes. The Hawks are taking a page out of the Tampa Bay Rays playbook and going with the opener.

Played 26 minutes off the bench. In nine games as a starter, Len was the #190 player for fantasy. In two games off the bench, he’s a top 60 player. Go figure. Big fish better suited in the small pool and feasting on second units? Perhaps. I don’t care, though, as long as he keeps producing like this. You know that Len steals sunshine though, right?

Mario with the D!!! He’s a streaky shooter, so the ride is bumpy with Saric, but he provides points, tres, and boards from the power forward position. As I wrote yesterday, I’m really impressed with how the Suns offense is flowing, so Saric should get plenty of good looks.

Nice bounceback game for Oubre, as he had to deal with LeBron the prior game. The 30 points and 36 minutes played led the Suns. Oubre is a nice player to have on a fantasy roster because he contributes a little something something in every category. He has an outside shot of joining the 1/1/1 club if he can get the blocks going.

Only played 18 minutes because…..

….got hot and played 30 minutes. Don’t fret, Baynes owners. He is still the guy until Ayton returns. As for Kaminsky, this is what he does. Shoot from downtown. When he’s hot, he plays. When he’s not, to the bench to rot.

Atkinson went to Jarrett!!! As a result, he was rewarded with a shiny dub-dub. He played 30 minutes but the minutes have been split down the middle between he and DeAndre Jordan. Is this the New World Order? I remember George Bush’s New World Order speech in 1991. Glean from that information what you will.

Got the start and played 25 minutes for the injured Caris LeVert. Do you enjoy going to the Temple? How you answer that question will determine your course of action.

Played 19 minutes off the bench. Getting an opportunity now with the LeVert injury. Musa is a getter of buckets. He can stroke it from downtown and is very good at driving to the basket and finishing. Someone to monitor in deeper leagues.

Needs to recalibrate the sites on his bow.

The shooting will come and go, but the minutes are secure and the across-the-board contributions are enabling Barton to post top 50 numbers. Prior to the injury-riddled debacle of last season, Barton finished as the #52 player in 2017.

Porzingis is an amazing player. As many have referenced on Twitter, he needs to develop a better post game. Seriously, then he’d be unstoppable. Like Brad Stevens put Marcus Smart on him. Marcus Smart!

The #7 player for fantasy, as he’s improved his percentages dramatically. My projections had him as the #54 player. I’m a stupid, stupid man.

Morris has scored over 20 points six times this season and has a usage rate of 23.4. He hit the game winner last night and is a top 80 player for fantasy. Lol. 2019.

Played 22 minutes in his return. He fouled out, but whatever. It was nice to have Mr. Robinson’s neighborhood back. I saw that he was dropped in some leagues. That’s a neighborhood I would like to be in.

Played 30 minutes off the bench. My Stevie Franchise dreams are alive once again!!! Yeah right. I’m not falling for the bananna in the tailpipe. DSJ is such an athletic freak. Too bad he can’t shoot.

This is what gets all those LaVine posters sticky. The high turnovers and inconsistent shooting are what keep LaVine from breaking into the top 50 for fantasy.

Played 35 minutes off the bench. Back-to-back games with over 25 points. He’s also getting his 211 on, but isn’t providing much else. When I used to puff a lot, I used to tell my friends that the rim looked like the ocean and I was going to be splashing all day long. That’s where Coby is right now. Unfortunately, he’s going to return to what I was in reality.

I’m seriously at a loss for words for what he does and is doing. Making a mockery of the fantasy game.

With that said, he’s ONLY the #12 player due to the high turnovers and poor free throw shooting (on 11.8 attempts!!!).

After a slow start to the season, Bledsoe has been the #15 player over the past seven games. When he’s right, Bledsoe provides everything. Even chips in a block from time to time. For a guard, the boards and field goal percentage are magnifique.

Got the start and played 24 minutes for the injured Khris Middleton. DiVincenzo can provide some tres and boards, but the efficiency won’t be great and any access to ceiling is nuked because Sterling Brown, Pat Connaughton, and Kyle Korver will all get run.

In 24 minutes! LOL! The Clippers are going to be a f’ing problem this season.

Tom & Jerry, Batman & Robin, Peanut Butter & Jelly, Lou Williams & Montrezl Harrell. Just some of the greatest tandems in history. Lou got the start so Montrezl got the start too.

Got the start and played 35 minutes. He’s back!!! Top 40 player over the past four games. Favors will provide boards, steals, blocks, and excellent field goal percentage. The environment in New Orleans is ripe, so he should continue feasting.

Back from vacation. The injuries to Brandon Ingram, Lonzo Ball, and Zion Williamson have helped with the production, though.

Continues to start and played 31 minutes. Kenrich is a hustle player who contributes with a paltry usage rate. When everyone is healthy, he will be relegated back to the bench, but contributes across the board when he’s on the court.

Played 23 minutes off the bench. That’s how banged up the Pelicans are right now.