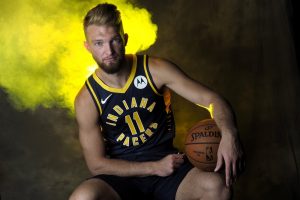 I’ve been watching Curb Your Enthusiasm lately. I know, I know. I’m like 20 years late but keep in mind that I finally watched (and absolutely loved) The Wire last year. Anyways, I just saw an episode of Curb in which a kid does a card trick for Larry David. Larry is impressed and asks the kid to tell him how he did it. The kid responds that he can’t because a magician never reveals his secrets. Well, Larry then asks how he learned the trick and the kid responds that a magician taught him the trick. Larry looks at him and tells him that when the magician taught him the trick that he was not a magician, so if he wasn’t a magician when he learned the trick, then he could tell Larry how the trick was performed. The kid responds that he’s a natural magician and that Larry is not. Ha! I love that show. Anyways, not all magic tricks are hidden secrets. Domantas Sabonis made the Magic disappear last night, as the Pacers defeated the Magic 109-102. How?

On the season, Sabonis is a top 25 player, as he’s averaging a whopping 35.6 minutes, 20 points, 13 boards, and 4.1 dimes. The percentages are excellent as well (52% from the field and 85% from the free throw line). Now, Myles Turner missed his fourth game in a row, so that’s been a boon for his short term production. The usage rate has fluctuated all over the map, but the assist and rebound percentages are significantly higher without Myles on the court. Makes sense. When Myles returns, Sabonis will likely return to being a top 50-60 player. It’s not smoke and mirrors that he’s a top 25 player, though. He is legit, but he’s not going to be the lone ranger all season long. Beep. Boop. Bop. You know what’s not smoke and mirrors and is straight legit? The Stocktonator.

The breakout continues. 20.8 points, 1.4 tres, 5.2 boards, 8.9 dimes, and 1.2 steals. Brogdon is third in all the NBA with 9 dimes per game. Malcolm has been far above the middle in production. Now, what happens when Victor Oladipo returns? I wouldn’t overreact. Since Oladipo has been with the Pacers, he’s had usage rates of 30.1 and 27.9. Those are high numbers but, Westbrook and Harden are able to coexist with both having usage rates in the mid-30s. Will Brogdon continue being a top 20 player for fantasy? I don’t see why not. He contributes in everything but blocks.

Getting run due to all the injuries on the Pacers. Stop doing the Dougie.

Both Nikolas, Vucevic and Jokic, took a while to get going, but both are starting to hum now. Congrats to all of you who bought low.

Fournier can splash pure wetness, but all too often, the pipes get tainted and splurts out a bunch of junk. Take the bad with the good. He provides points, tres, and dimes. Don’t expect many stocks.

Continues to start but only played 17 minutes. Bacon is only good when sizzling. When cold, it’s vomit-inducing. Cody Martin has been getting more run lately and Devonte’ Graham has been spectacular, so Bacon’s minutes are far from secure.

Got another start for Ben Simmons and played 29 minutes. Neto can provide some dimes and tres in super deep leagues or for DFS, but only while there’s no BS. An honest Neto. Good for the morally inclined. Meh for fantasy.

The 76ers buzzzed the Hornets, 114-106. No one scored 20 points, but four of the starters scored at least 10 points, grabbed 7 boards, dished out 3 dimes, and stole 1. In addition, only Josh Richardson played over 30 minutes. Load management due to the suckiness of the opposition.

Not a great fantasy line by Embiid’s standards, but the best of the day for the 76ers. With that said, Embiid contributes across the board. The only bugaboos to his game are the elevated turnovers, injury concerns, and load management.

A career-high! Sexton doesn’t change positions or provide foreplay, but he gets the job done. Points and tres are all you will get.

No one else on the Cavs had huge fantasy days because the Knicks freaking suck. They lost 87-108. As a result, Kevin Love went 17/8 while Tristan Thompson and Larry Nance Jr. both went 9/9.

Got the start and played 17 minutes because…..Knicks. And the fact that Mitchell Robinson was out due to a concussion. The Taj Mahal will be closed to the public soon, so get your tickets now!!! The Knicks marketing department must be ecstatic right now.

Randle does have the ability to mess around on any given night. Unfortunately, he doesn’t provide tres or defensive stats, and the percentages are poor. As a result, he’s currently outside the top 200 right now and will likely end up around the top 100.

Played 35 minutes last night. The prior two games, Ntilikina received 38 and 39 minutes so…..It’s Happening!!! It’s Happening??? I’m not sure. The offense stinks, but the dimes and stocks will be there, and Elfrid Payton has been out. Maybe Fizdale will Fizdale himself. How about that?

Only played 24 minutes due to foul trouble. Barrett can provide points, tres, boards, dimes, and steals, but absolutely murders your percentages. He’s shooting 44% from the free throw line!!! 40% from the field. He’s currently the #351 player for fantasy.

You ever heard, “We want killers on this team!” Well, the Knicks took it literally, as they acquired a bunch of players that kill shooting percentages. I may not like the vision, but respect the execution. Portis played 29 minutes and should continue to get elevated run for as long as Mitchell Robinson is out.

In 24 minutes! Jarrett Allen received the start, but only played 12 minutes due to foul trouble. DJ can spin this tune from time to time, but isn’t getting consistent run to be counted on.

Played 26 minutes and led the Nets in scoring. Dinwiddie can pop off on any night and provide points, tres, and dimes, but the lack of stocks and poor shooting efficiency keep his overall value low.

Top 25 player for fantasy right now. He doesn’t provide the D, but everything else is magnifique. He’s shooting 54% from the field!!! That will likely come down, but he should end somewhere in the high-40s. Like how Booker has increased his dimes every season, so he has in the field goal percentage as well. S. T. U. D.

Top 35 player for fantasy!!! We knew about the tres, dimes, steals, and shitting shooting percentage, but he’s averaging 6.8 boards!!! Even if those come down, he’s still exceeding draft day value.

The WB is back!!!! But like the real WB, it comes and goes. In addition, the programming content goes through peaks and valleys. With that said, he plays a ton of minutes and contributes across the board. Currently, he’s a top 50 player for fantasy.

7 turnovers please! Life is all about context. If I yell that at the pastry store, then it’s all good. For fantasy, not so good. Murray did turn his ankle in this game, but was able to return. May have affected his performance.

The Lord giveth. The Lord taketh away. He’s averaging 26.7 minutes on the season. Last year, that number was at 34.4.

Last season, Wiggy Wiggy Wiggins shot 41% from the field. This year? 46%. All offseason, the Timberwolves tried to get Wiggins to stop shooting the midrange shots, and either attack the rim or shoot from downtown. Well, he’s increased the shots from inside 10 feet almost 5% from last season. Hmmm, 41% to 46%. 5%. Illuminati was here. In addition, he’s making over 2 tres per game for the first time in his career. And he’s averaging over 1 block for??? Yup, the first time in his career.

Got the start and played 31 minutes because Jeff Teague missed another game.

Played 36 minutes! Okogie….excuse me, I’m getting hungry right now. Gogi is beef in Korean so….Anyways, Okogie isn’t a great shooter, but he contributes across the board.

Cousin Peter is proud of Jabari’s heroic play in lieu of John Collins. Did he also get bit by something? Because we’ve always known that he can score, but 6 stocks? Who is this masked hero? It’s a small sample size, but in four games as a starter this season, Parker is a top 20 player! I wouldn’t count on the defensive numbers to continue, but Parker will be an excellent source of points and boards for as long as Collins is out.

Aaaaaaaaaaaaaaaaaalmost messed around. Well, if it makes you feel any better, he did mess with your turnovers and shooting percentage. Feeling better? That is who Trae is. Whatever. IDC. IDC. The usage rate is 36 and he’s averaging 26.3 points, 3.1 tres, 4.4 boards, 8.4 dimes, and 1.8 steals!!!!

Got the start and played 31 minutes. It’s on now.

Played a whopping 40 minutes off the bench! Cam Reddish only played 16 minutes, so you do the math. C’mon, I’m doing the writing. Bembry will provide across-the-board production, but the usage is low and the we are not sure about the minutes yet.

Got the start but only played 24 minutes. Not so Super, Mario.

Got the start and played 34 minutes because Rodney Hood was out due to back spasms.

In 24 minutes off the bench. Slowly but surely, Simons is carving out a significant niche. The team loves him and he’s a professional getter of buckets. With that said, role will never be too significant unless injury strikes and he’s primarily a points guy.

In 44 minutes, as the game went to OT. He’s the numero uno player for fantasy right now!

Someone asked a few weeks ago if anyone has ever won the Most Improved Player award in back-to-back seasons. No one has ever won it twice, but if Siakam did, I wouldn’t be mad. P.S. – I’d be freaking amazed because that is what he is. Top 15 player for fantasy right now.

Got the start and played 39 minutes because Kyle Lowry was out. The shooting efficiency is rarely good, but he provides points, tres, boards, dimes, and steals. With Lowry projected to be out for a few weeks, VanVleet will for sure be VanElite. Shoutout to EMac over at Awesemo for that one.

Got the start and played 26 minutes because of the Lowry injury. Mainly a points and tres guy.

Played 17 minutes. Should get backup run for as long as Lowry is out. Not a great shooter, Davis is super athletic, could provide some dimes, steals, and do this…..

He’s good. Blah. Blah. Blah. He did seem to aggravate his shoulder after blocking a shot, though. Something to monitor and keep in mind.

Messed around but it wasn’t a good day. Those pesky percentages.

Played 24 minutes off the bench. Things that make you go hmmmm…..Kuzma won’t provide the D or dimes. Maybe some boards and should provide plenty of tres. Man, he had so many open looks last night. With that said, if he doesn’t get over 30 minutes of run, it may be tough for him to have value.