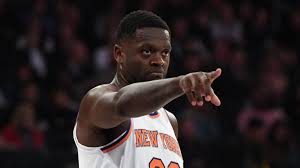 Got the start and played 25 minutes. With Kevin Love out, Thompson was a popular DFS selection.

He is reverting back to who we thought he was. With that said, Thompson is still a viable option for boards and blocks. Just beware that the free throw shooting is poor.

Made his first career start and played 31 minutes. Porter has been averaging 20 minutes per game on the season, so he’s getting some run. With that said, I can’t see him being fantasy viable even if he plays more because the shooting efficiency is poor and he doesn’t contribute much in the periphery cats.

Lol. I can only laugh at Morris’s season so far, and that of the Knicks. He’s scoring, providing tres, grabbing boards, and even contributing the D! L. O. L! The shooting efficiency still stinks, though, and there’s no way this can continue, right? Buehler?

Played 24 minutes because the Cavs suck. After receiving a ton of run earlier in the season, he’s been averaging under 30 minutes per game over the past four games. The efficiency sucks….yeah, the Knicks have a type….but he does provide some points, tres, boards, dimes, and steals. For the season, he’s outside the top 300 for fantasy!

Only played 17 minutes because? Class? Yup, the Cavs suck. You should know what lies in Mr. Robinson’s neighborhood. Blocks, boards, and low minutes.

DeMar DeLights like this from time to time. To keep us in DeMemory. Normally, is DeMeh, though, as he will provide 21 points, 5 boards, 5 dimes, and 1 steal per game. To be fair, those numbers are better than meh, but the upside is limited. No tres or blocks either.

Played 20 minutes off the bench. No.

Father, forgive me for I have sinned. I ranked Luka outside of the top 50 coming into the season.

Luka is the #8 player for fantasy and a main reason is for the huge improvements in shooting efficiency from both the line and field.

Got the start and played 35 minutes. A career-high in points. He’s played 35 and 32 minutes the past two games and has the ability to contribute across the board, especially in the defensive categories, but he’s too inconsistent to rely on.

Got the start and played 28 minutes. Boards and blocks are what he provides, but the three-headed monster at center for the Celtics limits any upside. Enes Kanter palyed 5 minutes, while Robert Williams received 15 minutes. Those numbers were flip-flopped the prior game.

The field goal percentage stinks on the season, but is he heating up? Channing sure hopes so. The dimes and blocks are light, but the turnovers are low and Jayson provides plenty of points, tres, and boards. Top 50 player for fantasy.

Kemba has slowed down after his torrid start. The usage is down to 25 and the points are below 20 per games. The dimes have ticked up by one, though. With that said, this should just be a blip on the radar. Now, Kemba hurts you in field goal percentage and, although he does contributes defensive stats, he’s still a slight negative in those cats. Points, tres, dimes, and he rebounds well for a guard. Should get back to being a top 25 player sooner than later.

Played 30 minutes off the bench, the first time playing over 21 minutes all season. Wanamaker can provide some dimes and steals, and could be getting more run with the Hayward injury.

The Suns scored 85 points at home. Devin Booker, Dario Saric, and Kelly Oubre Jr. all attempted 13 shots. Awww, that’s so cute. Booker scored 20 points, Oubre contributed 15, and Dario provided 9. The Celtics play really good defense, and with their ability to switch everything on the perimeter, none of the Suns players were able to get clean looks at the basket.

Played 32 minutes, which is the important thing to take away from this game. That’s now back-to-back games with over 30 minutes of run. He’s only played more than 30 minutes in three other games. Hopefully now the Lord will giveth and provide the across-the-board production that we have become so accustomed to receiving.

Played 36 minutes and looks to be finally healthy. The tres are still lacking, as he’s not particularly aggressive with his shot, but Teague should provide plenty of dimes and some steals.

Andrew Wiggins missed another game due to illness, so Jake Layman got the start. He only played 14 minutes and didn’t do enough to get a stat box.

Played 24 minutes off the bench. Martin had played a total of 35 minutes prior to last night.

Top 10 player over the past three games. He is who we thought he is. Yes, we should crown his ass!

Played 34 minutes off the bench. The shooting efficiency has been Down Under dreadful. 34% on the season and 27% over the past three games. He’s also not contributing the steals and dimes from last season. Granted, some of that has been the decrease in minutes and change in role, but still….he’s not this bad.

See, he’s human. Naw, who’s he kidding. G just does a couple of things wrong so that we don’t question the validity of what he’s doing.

Back-to-back games with 5 blocks! He’s actually had another game with 5….

These are the songs I grew up with. Anyways, another game Brook had 6 blocks!!! So, last night’s game was whatevers. What really jumps out at me is the 10 boards. Early in his career, Brook used to get his board on, then he made some business decisions and morphed into a spot-up shooter. He’s averaging 4.2 boards on the season and he has only two games with over 10. What I’m saying is that don’t expect this kind of line on the regular.

Donte DiVincenzoGot the start but only played 17 minutes. I think it’s impressive that he did not shoot the ball once. Unfortunately, his role on the team is to shoot so it’s a troubling development.

Sterling BrownContinues to start for the injured Khris Middleton and played 29 minutes last night. He’s viable for as long as Middleton is out. DiVincenzo can provide points, tres, some boards, and steals.

Lauri MarkkanenPlayed 25 minutes off the bench. He and DiVincenzo have been replacing Middleton’s minutes. Pat Connaughton had been in the mix as well, but he only received 13 minutes. Something to monitor going further.

Tomas SatoranskyOutside the top 100 and shooting 36% from the field. Over the past four games, that number has been 29%. Buy low.

Daniel GaffordContinues to start but only played 18 minutes. I had such high hopes for him this season. I’m a stupid, stupid man.

Coby WhiteIn 20 minutes off the bench. Luke Kornet had nose surgery and is out for a few weeks. In addition, Wendell Carter Jr. was in some foul trouble, so minutes opened up last night. With that said, Gafford could get some run in the short term and could be a source of blocks and boards.

Nassir LittleHe’s averaging over 15 shots per game over the past seven games! Huck em and chuck em. The shooting efficiency is beyond poor, though. 36% from the field. White will provide some steals and some dimes, but he’s primarily a points and tres guy.

Damian LillardGot the start and played 29 minutes. With Melo set to join the Blazers today, we will likely be seeing Nassir very Little.

Danuel House Jr.He’s a top 5 player on the season, but has been a top 80 player over the past four games. He’s been shooting 28% from the field and the usage rate has plummeted down to 23. Teams are taking the ball out of Dame’s hands and forcing others to beat them. That’s probably why the Blazers decided to take a chance on Melo.

Russell WestbrookReturned from injury and played 34 minutes. House should play a ton of minutes and provide tres, boards, and defensive stats. The percentages are good as well. House should get plenty of open looks playing alongside Russ and Harden.

P. J. WashingtonA typical Russ game. Counting stats up the wazoo, but horrible percentages. At least he made most of his free throws. Russ is going to be inconsistent, but the potential to mess around is there every night.

The Hornets got spanked, 96-132 in Toronto. Bizmack Biyombo played 20 minutes and scored 13 points. That’s how bad it was. As a result, you know the deal. No blurbs for you!!!!Only played 17 minutes due to foul trouble. I’m not ready to put on the P. J.s and call it a night, but definitely something to monitor.

Chris BoucherReturned from the eye injury and played 27 minutes. The Force is strong in this one.

Steven AdamsIn 18 minutes! Serge Ibaka is still out, which would’ve normally given more run to Boucher, but Rondae Hollis-Jefferson has entered the fray and soaked up 20 minutes of run last night.

Chris PaulPlayed 27 minutes last night and is only averaging 26.4 on the season. He’s shooting 28% from the free throw line on 2.8 attempts! LOL! If you are dying for boards and blocks, Adams could be viable, but it’d have to be life threatening.

Montrezl HarrellGot the start and played 2o minutes. I’d love to see Zubac in a situation where he gets closer to 30 minutes. It is what it is, though, because…..

Yeah, let’s keep Zubac at 20 minutes. Trez is a top 85 player because of no tres (what a shame) and poor free throw shooting. Outside of those…..

Kawhi Leonard did not play again. His third straight game due to a knee contusion. I’m not overly worried….yet….but it’s something to monitor closely.

Got the start and played 29 minutes. He wasn’t going to score 35 points and have a 47.5 usage rate every game. The most encouraging aspect of last night was the minutes increase, from 22 to 29.