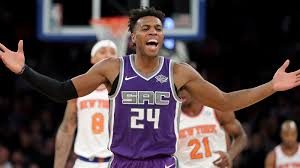 Back in the 80’s, Hasbro came out with My Buddy, a doll marketed for boys to teach them about caring for their friends. It was controversial at the time because dolls were traditionally for girls. Yep, took until the 80’s. Anyways, there were two things that always stuck with me regarding My Buddy. First, the catchy commercial song. Second, the fact that My Buddy eventually morphed into Chucky from Child’s Play. In a way, it perfectly captures the duality of the world, which segues perfectly to Buddy Hield of the Sacramento Kings. Selected with the sixth overall pick in the 2016 NBA Draft, big things were expected from the guard out of Oklahoma. Even bigger things were expected a year later when he was a fundamental piece in the trade for DeMarcus Cousins. Vivek Ranadive, owner of the Kings, said, “Buddy Hield has Steph Curry potential.” As my momma always told me, “potential don’t mean shit.” Buddy had some ugly shooting performances: 1-for-10, 2-for-10, etc. As a result, he was allotted 30 or more minutes in a game just twice. Every time he sucked, we threw him into the proverbial trash and eradicated him from our memories. But….he kept resurrecting. Just like Chucky. Last night in Philly, Buddy helped the Kings best the 76ers 101-95. Buddy went:

Until I see the Kings actually commit to Buddy, I’m hesitant to trust him. He can get hot, for extended stretches of time, but he will just end up disappointing you. Then you will throw him in the trash and the circle of life will resume once again.

Got the start at shooting guard because George Hill was out, but only played 18 minutes. Up until last night, it looked like the Kings were committing to Bogdan. He had played 29, 33, 33, and 30 minutes in the prior four games. Buddy got hot last night, so Bogdan got the hand. Maybe the Kings just have commitment issues? This may be shaping up to be a battle of epic proportions. In the red corner, we have Vivek and Buddy. In the blue corner, we have the Serbian connection of Vlade and Bogdan.

Zach has the perfect game for the YMCA circuit. He’s going to be a force for a long time. Has to be the overall number one pick, right? I love that he’s able to rep the YMCA-style in the NBA. Love, love, love his game.

De’Aaron Fox played 11 minutes before exiting due to injury.

Is Buddy Hield-esque in his consistency, but he does have the ability to put the ball in the basket. If Fox and Hill are out for an extended period of time, Mason should be the main beneficiary.

They went to Jerryd!

Imagine when he learns how to shoot!

Played 21 minutes, but could be in line for more minutes if Redick is down for an extended period of time. The big question is if his hair will be able to handle the extra run?

Played 37 minutes, but did exit the game for a brief period. Shocking, I know. The injury was to the wrist, but X-rays were negative. Keep an eye on any reports, like “day trader watching chart” eye.

That’s 22 double-dubs for Boogie on the season, two shy of KAT. Do a little dance! Make a little love! Get down tonight!

Played 14 minutes. Rondo did bang his knee early in the game, so that was probably the reason for his benching.

Probably better running with the second unit, as there are not many shots to go around with Wall hoisting up 18 and Beal 19.

Played 33 minutes. Prior to the injury, Wall was playing 37-40 minutes a game, so there are still some RPMs left. Once Wall is up and running, no illegal shall enter our country again!

Great Scott! Straight en fuego lately. Last three games: 24, 19, and 22. 73% from the field and 50% from downtown. He’s also grabbed four boards in each game and collected some D stats as well. Dude is playing like some new surprise baby mommas came into his life recently. Keep pressing and parlaying, but realize that every shooter craps out at some point.

Played 30 minutes, which was to be expected with Cousins and Davis on the other side. Just be wary when the other team goes small or has a nimble center that can stretch the floor.

One rebound and seven turnovers? Numbers not fit for a king.

Who’s more underrated? Khris or Al Horford? Khris does everything except contribute in blocks. Top 25 player in fantasy. You know who doesn’t undervalue Middleton? Stocktonator, as it loved him last night.

Eric has Dwight Howard shoulders. Dude is built like a tank. If only he could shoot a little better. Definitely needs an upgraded guidance system. With that said, he does contribute across the board.