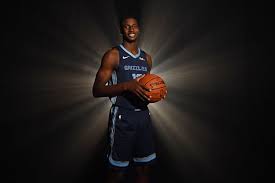 Now that Thanksgiving is in the rearview mirror, all hands are on deck for Christmas. The neighbors adorn the houses with electric bling, the empty lots are filled with trees standing in Terracotta formation, and we all become tolerant of elevator music. It’s a happy time indeed. Beep. Boop. Bop. You know how you can always be happy? By using the Stocktonator. In fact, one could say that it’s a jubilant time with voices singing Jingle Bells and hands literally jingling bells. Guess who was jubilant and jingled something last night in the NBA?

Jaren Jackson Jr. was unbelievable. The 31 points were a season-high and he jingled the stat box to make sure there was a little something something in each box. He was in foul trouble….again….What else is new? But at least he was able to navigate around it. Now, before you take off your clothes and run around jingling your parts, know that Jonas Valanciunas and Brandon Clarke were both unable to play. Coach Jenkins had no choice but to leave him out there. With that said, this is the ceiling that JJJ can access. He’s young, but it’s only a matter of time before he contributes these kind of lines on a consistent basis. Don’t expect that to happen this season, so expect the inconsistencies, but mental masturbate over what the future entails.

Someone call 911 because my erection has lasted for longer than four hours. What a performance from Paschall. The dimes were a season high and he’s not usually a generous fellow, so don’t expect many going forward. In addition, he doesn’t contribute the D. Good thing he’s not in the sex video business. What Paschall does is score and grab some boards. He has scored double figures in all but three games this season. The efficiency has been good as well. What happens when the Warriors get healthy?

Made his season debut, got the start, and played 15 minutes. Looney will provide boards and blocks, but it’s going to take some time to get the minutes ramped up. Don’t go all Looney with your expectations just yet.

The Warriors scored 79 points and rolled out a starting lineup of Paschall, Looney, Glenn Robinson III, Willie Cauley-Stein, and Alec Burks. LOL. No more blurbs for you!!!

Hunter has been producing better lines as the season has progressed. With that said, his fantasy value has been underwhelming. Hunter plays a ton of minutes, but his only contributions are in points, tres, and boards. You’d think the defensive contributions would be more, but it is what it is. What really kills him is the poor shooting efficiency. Now, he left last night’s game due to a dislocated finger.

Continues to start at center and played 26 minutes last night. Jones isn’t a great fantasy asset, but if you need some points and blocks, Jones can be of service.

Got the start and played 28 minutes. Bembry does provide across-the-board production, although the offensive aspect of his game is lacking. When the Hawks are healthy, Bembry will be relegated back to the bench.

Aaaaaaaaaallllllmmmmmmmmooooooooooossssstt messed around. If you’ve ever seen clips of poppa Sabonis, you knew the passing acumen was in the tool box. With that said, he hasn’t messed around yet. It’s going to happen at some point, though.

Continues to hum along. This Malcolm is way above the middle, as he’s a top 30 player for fantasy and contributes in everything but blocks. He’s shooting 96% on 3.9 attempts from the charity stripe!

I guess all the Holidays are back from….Holiday. Jrue has been balling like many have expected, while brother Justin has been balling like no one anticipated. He’s been a top 40 player over the past five games. The contributions in the defensive categories have been eye-opening. He’s averaged 2 steals and 0.8 blocks over the past five games. <insert shrug emoji> Those numbers are going to regress. If so, then what else is left? Some tres, boards, and a smattering of D.

Got the start and played 33 minutes due to all the injuries. A king this Solomon is not, and you don’t want to die on this Hill, but minutes are minutes, so if he gets them, then he’s a viable streamer. Nothing more.

Continues to start with Ja Morant out. Many in the fantasy community love Jones, and I get sucked in, but he’s never wowed me when given the chance. The usage is low and the offensive game is lacking. He will contribute dimes and steals, though. There’s a chance that this player could overtake him at some point….

Played 25 minutes off the bench. He looks better than Jones and contributes dimes and steals with more offensive punch.

Got the start but only played 26 minutes.

My momma always told me that if you don’t have anything nice to say, shut the [email protected]#! up.

No starter for the Bucks played more than 23 minutes. Yes, the Knicks suck. The game was so out of hand that Thanasis Antetokounmpo played 12 minutes and scored 10 points. He had played a total of 4.3 minutes all season entering last night’s game.

Only the third time all season that Markkanen has scored at least 20 points in a game. He’s too good of a player to be the 175th player for fantasy. At some point, he’s going to get his groove back. Maybe he should seek out Stella.

LaVine has been on quite the heater lately. Over the past five games, he’s scored 28, 28, 36, 18, and 49 points. Check out the steal numbers: 1, 1, 2, 2, 2, and 2 over the past six games! A smooth criminal indeed. The usage rate is over 30 and sometimes the shooting efficiency is poor, but he contributes across the board and has 50-burger ceiling.

Played 34 minutes. That’s now three straight games receiving over 30 minutes of run. I’m glad that rational heads have prevailed in Chicago, as Satoransky is the team’s best choice at point guard. The only thing Sato doesn’t provide for fantasy is blocks, but he contributes everywhere else. If he continues to get the minutes, I forsee him messing around a few times.

Shooters shoot, and that is what our Buddy does. Due to the lack of contributions in anything but points and tres, our Buddy is barely a top 100 player.

Do you remember when we all thought Rudy was nothing but an underdog? Those were entertaining times. Stand up, remove your hat, and pay your respects….

Only played 23 minutes due to a hamstring injury.

Played 31 minutes off the bench, the most since November 18th. If Conley misses an extended period of time, it could be Jingles season again. It is that time of year.

Tobias is the C. J. McCollum of forwards. Solid yet unexciting. Has the potential to access ceiling from time to time, but more often than not, will be boringly satisfying. The missionary position of fantasy.

Talk about boring and unexciting. That’s Al Horford. Perenially underappreciated. Did you know that he’s the #34 player for fantasy on the season? Over the past seven games, he’s been the #17 player! Now, some of his value comes from the miniscule turnover rate and excellent percentages, but he provides points, tres, boards, dimes, steals, and blocks. Bascially, everything. Like Al Bundy is disrespected and not given his due, so it is with Al Horford. Speaking of Al Bundy, he scored four touchdowns in the 1966 city championship! Give the Al’s their due respect.

Mario with a D has been thriving with Ayton and Baynes out. Top 30 player over the past three games. He provides points, tres, boards, and some dimes. The turnovers are low and the free throw percentage is high. When the team is healthy, he will go back to being a top 150-ish player.

Played a team-high 38 minutes! He thrives in uptempo environments. Anyways, Oubre was one of my favorite mid-round targets because he can provide points, tres, boards, and defensive stats. One of the more balanced players in that range. The only thing he lacks is dimes. He selfish.

Played 30 minutes off the bench. Only the second time all year he’s received at least 30 minutes of run. Bridges is not an offensive threat, as he makes his coin on defense. If he starts getting consistent minutes, he’s a viable 3-and-D player. Something to monitor going forward.

Such a solid player. Needs to contribute more in the defensive cats to crack the top 25. Regardless, he’s one of the best shooters/scorers in the game…..

Got the start and played 26 minutes. Cody Zeller played 18 minutes. When Zeller returned, I thought our Battleship was sunk, but the Bismack continues to navigate the seas.

Graham is taking too much advice from Rozier about shooting. Them some scary numbers. With that said, the points, tres, and dimes have been absolutely lovely. Averaging 10.3 dimes over the past four games! The poor shooting efficiency and lack of defensive stats keep his overall value down.

Played 31 minutes off the bench! The first time playing over 30 minutes all season. Honestly, I forgot that he was still in the league. There’s a reason the expressions Shit Happens and a Broken Clock is Right Twice a Day are common.