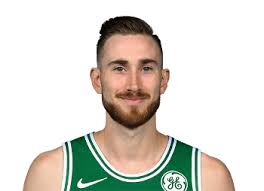 I always enjoyed the cartoons with the little red devil on one shoulder while the white angel was on the other. Maybe it’s my appreciation for the duality of life. Or maybe it’s because I understand there’s a time for talking shit and another time for just letting the results speak for themselves. Gordon Ramsay is the ultimate shit talker. How someone hasn’t grabbed a souffle and shoved it down his throat is beyond me. Beep. Boop. Bop. You know what doesn’t talk shit and just delivers results? The Stocktonator. With that said, his Hell’s Kitchen franchise is a rousing success. The reality show was viewed by millions, primarily due to his berating of chefs. The restaurants seem to be popular (I’ve never gone), but I’ve heard that Ramsay isn’t just some shit talker with nothing behind it. He’s actually a good cook, but the shit-talking persona is why most people are familiar with him and his food. Gordon Hayward Heaven’s Kitchen is the complete opposite. Hayward is unassuming and has that All-American look. His game isn’t flashy but very effective. Last night, though, he put on a heavenly performance that was almost flawless:

Unfortunately, the 40-burger wasn’t on the menu but there were plenty of goodies to go around. Granted, it was against the Cleveland Cavaliers, who don’t have the most stifling defense, but Hayward looked smooth, attacked the basket when given the opportunity, and his mid-range game was lethal. Fully healed from his gruesome leg injury two years ago, Hayward is currently the #28 player in fantasy and will likely end up in the 30-40 range come season’s end.

Sir Isaac has been as good as advertised….on the defensive end, as he’s averaged 1.5 steals and 2.5 blocks per game! The offense? He is averaging 1.5 tres, which puts him on pace to be the newest member of the 1/1/1 club, but some more experimenting needs to be done. There have been flashes of brilliance, though. The usage rate is a paltry 16.2 and he’s only averaging 8.8 field goal attempts per game. When the apple bonks him on the head and he figures out everything, Sir Isaac could be one of most influential fantasy assets for years to come.

Got another start, his second on the season, but only played 24 minutes. He and D. J. Augustin are splitting the point guard minutes straight down the middle. With that said, it could be happening. Keep monitoring the minutes, as it wouldn’t surprise me if the pendulum starts swinging in Fultz’s favor.

If you need defensive stats, wait Aminu and call upon Al. He does have the ability to shoot from downtown and grab some rebounds, but the usage rate is so low that the offense is not something to count on.

Played 26 minutes, as he returned from a knee issue. When healthy, Adams is a dub-dub machine who will get his block on and destroy your free throw percentage.

Shai is so damn Gilgeous. I wish I had more shares. Anyways, you don’t care about my fantasy teams. Shai can get to the rim at will and the J from downtown has developed. And those D stats! Those beautiful, beautiful defensive stats. Shai is going to be a fantasy force for years to come, providing across-the-board production. For future reference, whenever The Logo (Jerry West) likes a player, it will be in your best interest to like said player.

Played 24 minutes off the bench after receiving 19 minutes of run the prior game. Bazley is only 19 years old, so it’s encouraging that he’s getting some early run. That should only increase as the season progresses. Bazley is 6′ 8″ and has a good stroke, from both the line and downtown. His length could allow him to contribute both steals and blocks. His handle package is lacking, but he’s a good cutter and finisher around the rim.

LMAO! The points, boards, and field goal percentage are way below last season’s numbers. He’s doubled the blocks, though! He’s 34 years old, and we know Father Time is undefeated, but I wouldn’t be too worried. He should get back to his reliable self soon.

In DeDe’s case, there’s been a significant reduction in boards and dimes from last season. I wouldn’t be worried about him either. Over the past four years, he’s been remarkably consistent, finishing within the 40-50 range each year.

Played 20 minutes. Lyles is starting but only averaging 20.2 mpg. He’s a source of boards and…..

Forbes is money! How many times do I need to write that? He’s starting and averaging 29 minutes per game. He is strictly a tres specialist, though. Hmmm, if you combined Forbes with Lyles, you’d still be three parts short of a complete player.

Played 26 minutes off the bench. Mills churns out tres and steals with solid percentages. Doesn’t get enough run to be viable on a consistent basis, but he does get the occasional start and minutes boost when he’s playing well.

John Collins was suspended 25 games for PED use. I actually don’t mind PED use in professional sports. If it helps them recover faster, keeps them in better shape, and lets them do impossible shit, then I’m all for it. That’s a conversation for another day, though. What does this mean for fantasy? Well, the direct beneficiary is….

Played 32 minutes and should see a similar workload for as long as Collins is out. Parker will be a source of points and boards. Don’t expect many defensive stats.

Hunter may contribute a teeny weeny amount of steals, but tres and boards will be his biggest contribution. He played a team-high 36 minutes and his floor should be relatively high due to his ability to play solid defense.

Only played 14 minutes. My sunshine has been stolen, as I had such high hopes for Len entering the season. I’m a bobo and deserve this, as I keep falling for the bananna in the tailpipe.

He had a usage rate of 41.4 last night!!! Ha! Expect plenty of Trae Days in the future.

Before the game, it was announced that Huerter was cleared to play 30-35 minutes. He played 25 minutes last night. LIARS!!! I kid. There’s no reason to rush him back, but I do expect Huerter to get over 30 minutes of run sooner than later. He’s a good shooter, but not just a specialist, as he can provide some boards, dimes, and stocks. Not many, but at least something.

Returned to action after missing two games and did what Barton do. The field goal percentage can be brutal at times, but Barton has the ability to contribute across the board. Due to his versatility on defense, the minutes floor should be relatively high.

What’s he doing? Smoking a pack a Marlbaros before the game, at halftime, after the game, at home, before practice, during practice? What? Get in there and buy if the Jokic owner is tilting his face off right now.

Only played 17 minutes due to an ankle injury. The injury history is vast for Harris, so it’s Defcon 1…or is it 4? I always forget. Regardless, it’s not an ideal situation because Harris has played more than 57 games in only two of five seasons. Malik Beasley and Monte Morris will likely get an uptick in minutes, and both performed well last season when given the opportunity.

Got the start and played 30 minutes. Theis is a boards and blocks player. The elevated minutes have come due to Enes Kanter being out, so those will come down when Kanter returns.

He won’t stop. He can’t stop. He will not stop. Thompson is a top 40 player right now, as he’s averaging 16.9 points, 11.7 boards, and 1.6 boards. The field goal percentage is also excellent, but the free throw shooting is a bugaboo. He’s never finished higher than the #127 for fantasy so…..but he’s never been a 28-year-old player who will be an UFA after this season.

Played a team-high 41 minutes and regulated. Both Domantas Sabonis and Myles Turner were out, so he soaked up a ton of the vacated usage.

Got the start for Myles Turner and played 32 minutes. He’s a skilled big man who is showing that he can board and block at this level. Will be useful for as long as Turner is out, which shouldn’t be too much longer.

Played 42 minutes, as the game went to OT. Graham is a baller and is providing points, tres, boards, and dimes. He’s could overtake Dwayne Bacon at some point. Maybe he already has….

Only played 13 minutes, as he was in early foul trouble, then watched Graham get cooking.

Got the start but only played 17 minutes. This after only playing 20 minutes the prior game. Bizmack Biyombo played 17 minutes and went 15 points, 6 boards, 1 steal, and 2 blocks as the Hornets mounted a comeback. Methinks it has just been situational and not indicative of any structural change to the rotation.

Played 31 minutes and didn’t get hurt! Woo hoo! His worst game of the year so far, but nothing to be alarmed about. Shit happens. Maybe it has something to do with all the “talk” of possibly playing in Chicago next season. Maybe AD was sending a message to Chicago subliminally. See, I suck. You don’t want me.

It was a good day.

LeBron is LeGood and looks LeJuvenated. He’s the #10 player for fantasy right now. The usage rate is 32.2 and he’s hitting his free throws at a 77% clip!

Avery Bradley did not play due to a knee bruise. Kentavious Caldwell-Pope received the start and played 21 minutes. He contributed 8 points, 3 boards, 1 dime, and 1 steal.

Played 26 minutes off the bench. Cook was cooking! Today’s post is all about cooks and kitchens I see. Anyways, Cook is a shooter, and the Lakers needed some offensive punch for a comeback last night. He normally won’t contribute the D or get consistent run, due to his porous defense.

Played 21 minutes off the bench. The minutes will be slowly ramped up. When they do, Kuzma should provide plenty of points and tres. Some boards as well, but nothing much more than that.

Lauri has been way off the Markkanen lately. After his 35 point outburst in the first game, Markkanen has failed to reach double figures three times and has not scored 20 points in any game. The field goal percentage is an atrocious 38.7% from the field and 21% from downtown. Yuck. He’s too good of a shooter for that to continue, so expect some normalization and the good times to return soon.

Who the fook is this guy? I was told that there would be across-the-board production. Otto has been so inconsistent this season, but barring injury, he should return to normalcy at some point.

Played 31 minutes. This Carter Administration will only get better as time goes on. Injury is a concern and so is the penchant for fouling, but he could be a beast if those are overcome.

LaVine is slowly rounding into form. For those of you that have his poster plastered on the wall, don’t keep the lotion too far away. The only thing you won’t get from him is blocks.

Mr. White opened the season scoring 17 and 25 points. Then, over the next five games, he shot 24% from the field and 18% from downtown. He’s a rookie, so there will be plenty of ups and downs. The Bulls are going to be terrible, so he could get more run later in the season. With that said, his defense isn’t good and his ability to run an offense is raw. I still think Satoransky continues to lead this team, so keep an eye on how things shake out over the coming months.