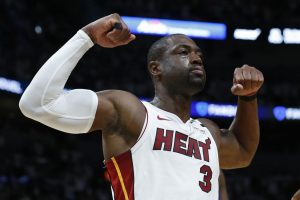 In 2008, Dwayne Wade averaged 30.2 points, 1.1 three-pointers, 5 rebounds, 7.5 assists, 2.2 steals, and 1.3 blocks in 38.6 minutes per game. In 9-cat leagues, he finished as the 3rd player in fantasy that year and it started a Golden Age. The following three seasons, Wade finished as the 7th, 7th, and 5th overall player. No wonder the property taxes in Wade County skyrocketed. But then Father Time started collecting his pension and Wade declined after his age 30 season: 95th, 96th, 72nd, and 222nd finishes. As a result, his 16th season in the NBA was to be a farewell tour. Maybe a token 20 minutes a game with a couple of rocking chairs were on the menu. But Wade a minute!

Played 34 minutes and led the team in shot attempts. Wade is averaging 24.5 minutes and 11.5 shot attempts per game on the season, but the efficiency has been inconsistent. He still has ceiling, though, as evidenced by last night’s game. I’m just waiting for April 9th, when he plays his final home game. Kobe shot 50 times and dropped a 60-burger in his final home game. I believe!

Only played 12 minutes. He has been dealing with knee tendinitis and was in foul trouble yesterday. In addition, Bam Adebayo had a spectacular game so Mt. Whiteside was emitting nothing but gas. P. U.

Played 36 minutes. For the loyal folk, you know I’ve loved Bam since I watched him in Summer League last year. He’s tall, long, athletic, and can give the business in transition. Unfortunately, Whiteside is still the guy in Miami, but there are injury concerns and he has one-year and $27 million left on his contract. BAM!

Beep. Boop. Bop. Stocktonator loved him yesterday. Of course it did because he and the Stocktonator come from the same silicon.

Got the start and played 24 minutes. JV is a matchup-dependent player. When the opposing team has bigs that don’t stretch the floor, he usually gets close to 26-27 minutes of run. If the opposition goes small or has a big can shoot from downtown, then his minutes crater to the 14-16 minute range. In the right matchup, he can score and grab rebounds. Give that man his varsity letter.

After his scorching start to the season, Lowry has fallen off hard. Over the past eight games, he’s the 88th player according to Basketball Monster. Obviously, the stats are down across the board, but most of the decline stems from the 38% shooting from the field. He’s a career 42% shooter.

Got the start, played 41 minutes, and led the Knicks to a 103-98 victory over the Grizzlies. Kanter is a double-dub machine, as he’s notched 13 in 20 games, which is good for fifth in the league. I’m a little confused as to what the Knicks are doing, though. Are they “Trying to not get Zion?” or “Not Trying to for Zion?” Starting and playing Kanter points to the former.

Played 23 minutes and continue to start. Over the past seven games, he’s been the 78th player for fantasy. He could put you in a good Mudiay if you want points, a handful of boards and dimes, and some D stats.

Played 29 minutes. If you want to develop a Tums drinking habit, then roster Burke. He does have a 26.3 usage rate on the season and jacks up shots as if he sees someone walking to the scorer’s table to sub him out. Respect.

Only played seven minutes. Maybe the goods within this Knox aren’t so valuable after all.

The Reverend Jaren Jackson Jr. delivered an immaculate sermon on the Lord’s day. He even swatted away evil, a holy seven times.

Played 40 minutes. I wish my center slots for fantasy were filled with Nikola Vucevic and Marc Gasol. Both are top 15 players.

The five dimes were a season-high! Now I’m rapping and mental kidnapping. Ok, I’ll stop. Rudy gets us Americans to stop making fun of the French. Now, how can we reciprocate?

Donovan Mitchell was away, so Rubio came to play. Rubio is a set-it-and-forget-it player, but not in the good way. You just play him because the ceiling is so high, but the floor is just as low, with no way of knowing when either will happen. Have fun!

Got the start and played 26 minutes. Coach Snyder said it was a matchup-based decision, but doesn’t change his fantasy outlook too much.

Came off the bench, but still played 24 minutes. A fringe top 100 player, do yourself a Favors if you need boards and D stats for cheap.

I thought that with Mitchell out, it would be Burks who would get the start. Instead, Royce O’Neale got the nod but only played 15 minutes. Burks put up the shots but only received 21 minutes. Looks like he’s set in his role, with or without Mitchell.

Got the start and played 34 minutes. It’s here! My BogBog has arrived. Threeecolas, steals, and a handful of boards and dimes are what BogBog will deliver. Don’t forget to tip him.

The trend is your friend. Over the past five games, Bagley has played 30, 34, 27, 26, and 27 minutes. Not coincidentally, he’s scored in double-figures in each of those games and has grabbed a total of 50 rebounds (10 per game).

Played a season-high 20 minutes. The depth chart is crowded, but Giles is an intriguing player, as he can stuff the stat sheet. If you have room, I’d take a chance, but know that there’s a minutes ceiling….for now.

After his poorest performance of the season on Saturday, Tobias came back on Sunday to deliver his best game of the season. Barring injury, the Brinks truck is backing up to deliver the bags, but Tobias didn’t want to take any chances and left no doubt that is the correct move.

Played 32 minutes. Harrell is shooting 71% from the line this season, so chalk one up for the Portland nightlife. Is that a thing?

The Clippers defeated the Grizzlies on Friday night. So, maybe they stayed in LA Saturday night and flew into Portland Sunday morning? Anyways, wherever they were, it must’ve been a helluva night.

Only played 15 minutes due to suffering a shoulder injury. The severity is unknown at this time.

Played 24 minutes due to the Nurkic injury. Could get a minutes boost, depending on the severity of the injury. Same for….

10th player for fantasy who scoffs at injuries and clowns, both on and off the court. What is Embiid’s ceiling? Beep. Boop. Bop. Stocktonator probably knows because it loved Embiid last night, but it won’t divulge that answer until you give it some digital Scooby snacks.

Tired of just being the hired help, Butler asserted himself yesterday. You know he’s not taking anything away from Embiid, but what about Ben Simmons? His usage, shot attempts….and girl? Now that would be some insane reality television, which has the Kardashians frothing at the mouth.

Played 19 minutes. Someone to keep an eye on if you need threeecolas. Shamet won’t provide much of anything else, but he’s getting up over five per game and looks to be locked into low-20s minutes per game.

I always hate on Russell, but there’s no denying the numbers. Over the past eight games, he’s been a top 40 player for fantasy. It took a while to buffer, but DLoading has arrived.

I’m not a crab legs guy. So much effort for so little meat. Throw Crabbe back into the ocean.

Marvin sucks….except when he plays the Hawks. His other 20-point performance came on November 6th against the Hawks.

Played 24 minutes and the 26 points were a season-high. He had been dreadful the past few weeks, so it was nice to see that his disappearance didn’t mean that he was dedicating himself to the church. Regardless, he’s a three-point specialist who doesn’t contribute much in any other category.

Got the start and played 30 minutes. I’ve been bullish on Collins since last year. He won’t provide many threeecolas, but he can contribute everywhere else. He’s very athletic and will grab boards and run in transition. The mid-range J provides versatility on the offensive side of the ball and the pace that Atlanta plays at is a B. U. T. ful environment to play in. In addition, playing alongside Trae Young will be a boon because of his passing ability and range from downtown.

Came off the bench and played 25 minutes. He had been dealing with an ankle injury and Kevin Huerter has been starting in his place. I’d imagine Huerter will continue to start, as the Hawks want to develop their version of the “Splash Brothers.” Bazemore seems like a likely trade candidate.

Got the start and played 34 minutes. He’s a rookie so these performances should be expected. The important thing to monitor is the minutes. Bridges won’t be a high usage player, but he does have the ability to contribute across the board.

The turnovers are high and he provides no blocks, but Booker is a top 50 player for fantasy. He’s dishing out 7.1 dimes on the season, after notching 4.7 last year.

Ahhhh. All is right in the world again. That’s three straight games Lake has not blocked a shot. Regardless, he’s been fantastic on the season, as he’s averaging 24.8 points, 9.9 rebounds, and 5.1 assists.

Yup, all is definitely right in the world. No blocks for Lake and truly barf-inducing free throw shooting from Dre. He did notch another double-dub, the 15th in 17 games, good for third in the league.

Played 25 minutes. I don’t like talking about Johnsons, as it makes me uncomfortable, but when one performs, kind of have to.

Geez, Vucevic absolutely destroys the Lakers. What am I talking about? He’s killing the whole league right now. #8 player in fantasy, averaging 20.4 points, 11.3 rebounds, 3.6 assists, and 1.1 threeecolas, steals, and blocks. Barring injury, I don’t see why he can’t remain at this lofty level for the rest of the season.

Another good game against the Lakers, as he put up 22/7 against them a week ago. With that said, this DJ won’t get the crowd jumping up and down, but will provide a steady diet of dimes to at least get their heads bobbing.

Just walk through the doors of Ross. More often than not, you’ll have an enjoyable experience.

Haven’t written up Kuzma much this season, as for good reason. He hasn’t been that good. He will score, but doesn’t contribute much of anything else. Currently, he’s the 116th player for fantasy, but has been a top 200 player over the past week or so.

Played 24 minutes. There must’ve been a lot of evil flying around yesterday because McGee was the second player to swat away a holy number yesterday. The NBA being faaaaantastic takes on a whole new meaning.

I still believe that Ball will be a nightly triple-dub threat. Right now, we are just getting piece meal performances, though.