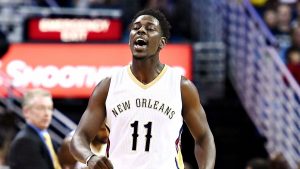 We are recuperating from the Thanksgiving holiday, but no rest for the weary, as preparations are beginning in earnest for Christmas. Then, it’s a quick turnaround for New Year’s followed by Groundhog Day. What? You don’t bow down to Punxsutawney Phil? You heathen. Valentine’s Day is next with Chinese New Year right after that. I married Chinese to hedge against the possibility that they rule the world in my lifetime. You don’t need to take it that far, but you may want to start celebrating that particular holiday. Just in case. St. Patrick’s Day, Good Friday, Easter, Patriot’s Day, Cinco de Mayo, Mother’s Day….I think you get the point. The holidays keep coming and going, which is exactly what Jrue Holiday does on the basketball court, as he played 42 minutes last night.

On the season, Holiday is averaging over 36 minutes per game. Since the holiday seasons are usually about giving, it’s only appropriate that he’s third in the NBA in assists (9 per game). The turnovers are a little high (3.7) and the free throw percentage is a little low (75%), but he’s providing 20.6 points, 1.4 threeecolas, 4.6 rebounds, 1.6 steals, and 0.8 blocks, which is good for the #27 player in fantasy. This Holiday always be working and providing.

Beep. Boop. Bop. You know what else doesn’t take holidays off? The Stocktonator, which is probably why it had Holiday so high last night.

Boy, I’m curious where George ranks in fantasy because he’s been awfully quiet lately. Over the past six games, he’s been a top 25 player. On the season, he’s the #7 player. That may make some PG owners want to do some x-rated things.

Aussie, Aussie Aus……I know better than that, as my Kiwi bretheren have reminded that Adams in not an Aussie, but a Kiwi himself. In celebration of the 7-for-7 performance from the free throw line….

Yo, B. How about you go down and situate yourself in front of the lake?

The haka got Drummond shook. Only the second time all year that he failed to grab at least 10 rebounds in a game. Still, he’s third in double-dubs with 17.

Reggie Bullock sprained his ankle after playing only five minutes. If Bullock is out for an extended period of time, that will probably mean more minutes for Langston Galloway, Stanley Johnson, and Luke Kennard.

It took me a long time to accept that the Kardashians are a thing. Same goes for Tristan in fantasy in year 11 of the Kardashian reign. It’s only fitting that Tristan is a part of that clan now.

Played 35 minutes after receiving 19 minutes the prior game when he first returned back from injury. Is George over the Hill or should you be over Hill? Perhaps both?

Damn, Jordan trying to get into the SON clan. I don’t sleep on the first date, so it’s going to take more than one game to become my ClarkSON. Plus, he’s a top 150 player. Have his people call my people when he cracks the top 100.

Played 29 minutes. Since being acquired by the Cavaliers, Burks has averaged 26 minutes, 12 shot attempts, 6.6 rebounds, and 13.6 points per game.

Kobe shot an all-time record 50 times in his final game. Kobe, is that you in there?

Got the start and played 32 minutes. Whether he starts or comes off the bench, Dinwiddie produces threeecolas and dimes to be a fringe top 100 player. Kobe Russell can’t take all the shots, right?

Has now played 14 minutes in back-to-back games. Kurucs is a 6′ 9″ and 220 pounds forward from Latvia. He has good length and nimble feet, which could foster success on defense and in transition. The shot isn’t great, but it’s useful. From what I’ve seen, he does have a diverse skill set, as he can post up, catch-and-shoot, and has enough handle to get to the rack.

Remember Kazaam that starred Shaq? Exactly, which segues perfectly to Shabazz. I kid. I kid. With Joe Kelly out, Napier has been backing up both guard positions. Napier is the B-movie of fantasy basketball.

Top 25 player. That is the most compelling evidence I can offer that shows that parallel universes exist.

Played 29 minutes. Over the past four games, Bradley has been….gulp….fantasy relevent? Top 135 player over that span. Exhibit B that parallel universes exist.

Disappointing performance. Pelicans should trade him now while they still can.

Got the start and played 39 minutes because Nikola Mirotic (illness) did not suit up. Randle is a bull in real life, but a two-trick pony for fantasy: points and boards. As a result, he’s barely a top 100 player.

Not a very friendly neighbor Chris was last night.

Nothing to get Harden excited about.

Continues to start and played 27 minutes. Dario Saric played 21 minutes. Should’ve figured that Thibs loves his Taj too much.

Lord Covington always plays well on the day after the Lord’s day. The Timberwolves are 8-3 since acquiring Lord Covington.

Will always be a great fantasy player, but I just can’t see him ever leading a team to the Promised Land.

Still starting and played 29 minutes. Juancho has been serviceable, providing threeecolas and rebounds, but should go back to riding the pine when Will Barton returns, which could be in a couple of weeks.

Jokic hasn’t been shooting particularly well lately, and the Nuggets have been in a bunch of blowouts, so the fantasy production has been a Jokic. With that said, always remember that he can mess around on any night, against any team, in any arena, in any country.

It’s been a disappointing season for Murray so far, as he’s playing more minutes than last season, but making fewer threeecolas, getting fewer steals, turning the ball over more, and shooting a lower percentage from both the field and free throw line. With that said, he’s grabbing more rebounds and dishing out more assists. Inconsistency and inefficiency are what rule Murray’s world, but last night was a reminder of what he can do.

Only played nine minutes, as he injured his right groin.

Played 27 minutes, as he sucked up most of the Harris minutes. Just last week, he played 36 minutes against the Lakers and scored 20 points on 8-of-14 shooting. 3 & D player.

The only Raptor to score over 20 points last night. Now that I think about it, Kawhi is kind of a lone wolf, yet Raptors are most successful in packs. Things that make you go hmmmm. SLAP! Hey! What was that for? Raptors are 20-5 and have the best record in the NBA.

Lowry is leading the NBA in assists with 10.3 per game. The shooting has been putrid lately, though. He usually doesn’t hit the wall until the playoffs!

Otto and Lord Covington are twins who were separated at birth.

The long-range scope on the BB gun still needs to be recalibrated, but everything else is B. U. T. ful.

Only played 24 minutes, but still produced. Outside of the 1-for-10 clunker in 22 minutes from three games ago, Morris had been getting around 29 minutes per game, with one game at 41 minutes. In addition, he had scored in double figures in seven of eight games and pulled down 7.5 rebounds per game. With Dwight Howard out, Morris is playing a lot of small-ball center, so that should give him a relatively high floor.

Not sure if he’s good or if the Knicks are bad. Both? Naw, the Knicks stink but Oubre isn’t that good. A nice bench piece that thrives in transition.

Continues to start and played 25 minutes. Ho hum. Another double-dub. Tied for fourth in the NBA with 16.

Grab me that cream cheese for all these bagels!

With Damian Jones injured, Looney got the start and played 29 minutes. The answer is yes.

Over the last seven games, Klay has quietly been a top 25 player with a usage rate of 30. That will tick down to the 26 range with the return of Curry, but top 50 player he should remain.

Played 24 minutes and also benefits from the Jones injury. Both Looney and Jerebko will be negatively affected when Draymond Green returns, but more so for Jerebko.

Got the start and played 31 minutes. Alex Len and Miles Plumlee both played four minutes. Doesn’t look like Dewayne is a Dedmon to me.