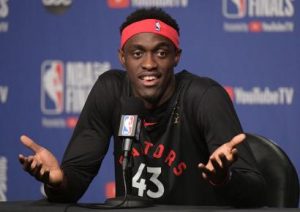 P. S., the postscript, is something that needs to be eradicated. Why? Because it’s a symbol of laziness, and we can’t have that in our modern day society. Hmm, now that I think about it, there’s good lazy and bad lazy. Good laziness fosters innovation, as some of the greatest inventions were created because of it. Bad laziness is smoking weed, eating donuts, and watching tv all day and night. P.S. is bad lazy. Back in the day, when folks would dip their brushes in ink and write via candle light, the P. S. made perfect sense. Imagine spending hours writing a letter, then at the end you remember something. It wouldn’t make sense to scrap the entirety of the letter, hence the postscript. Even after society was blessed with Whiteout, the postscript still had function. Now? There’s no need for the P. S., as everything is done on computer. For those of you who still write letters…..WHY? For you heathens who use P. S. while typing on the computer, you some lazy mofos. Last night in Toronto, a P. S. was getting busy and was definitely no afterthought. Pascal Siakam went bonkers and put up a line of:

Now, the game went to OT, but whatever. Siakam did most of the damage during regulation and had a usage rate of 35!!!! Kawhi Schawhi. I guess that preseason ADP of 20 wasn’t too high after all.

Van Vleet started at shooting guard alongside Kyle Lowry. The stat line shows he was fantastic, so I don’t need to write anymore. What does need to be said is that he played 44 minutes and the Raptors only went eight players deep. Yet, he only had a usage rate of 19.1!!! Ok, now that I wrote things down, let’s not start crowning him yet. Yes, he will get plenty of run, but the usage rate isn’t particularly high and the shooting efficiency was off-the-charts. That’s not something that is sustainable, but he will still be a great fantasy asset.

It’s not how you start, but how you finish right? Lowry was a professional brick maker for most of the game, but when OT hit, he hit a dagger tres to ice the game away and crush the spirits of all those who took NO +7. As with FVV, the usage rate was only 20.8. P. S., I told y’all he wasn’t an afterthought.

OG started at small forward and played 36 minutes. He’s going to provide the D, so it was nice to see him get shots on offense, many of the slashing variety. This jedi is still in training, but the future is bright.

The good? He played 32 minutes. The bad? Everything else.

Played 26 minutes and did not block a shot. Which makes me tremendously sad because I can’t be corny and write Iblocka. The trend from last season continues, as Ibaka rarely camps out in downtown, so don’t expect too many tres.

The undrafted Davis played 15 minutes and looked good to me, at least from a physical perspective. He’s thick and moves around like the Tazmanian Devil. The shooting wasn’t great and he did rush some things, but someone to keep an eye on, especially since Nick Nurse trusts him and not too many others.

Led the bench mob with 29 minutes. He could be a vital cog for this team because he can play both guard and small forward positions. At some point, Nurse has to open up the rotation, right? No way he can run eight out there every night at the pace that they are playing.

I guess my projection on Ingram was waaaaaaaaaaaaaaaaaaaaaaaaaaaay too low. Granted, some of the bump was due to Zion Williamson being out, as he started at power forward for him, but me thinks he still would’ve performed the same way regardless. The J looked good, even from downtown, he was able to drive to the hole and finish through contact, and the mid-range game was on point. He always grabbed boards and dished out dimes, but if he contributes the D and shoots well from the free throw line, then he may turn out to be the fantasy MVP.

Looked like he was on Holiday to me. Jrue played a team-high 41 minutes but was a ghost for much of the game. He had a net rating of -14.2 and the usage rate was only 20.8. With that said, it’s only one game and his history suggests that this was an outlier.

Lonzo looked good, had some incredible passes, and stroked from downtown confidently. The altered shot regressed back to it’s ugly form at times, but change takes time. The important thing to note here is that he only played 25 minutes, as he didn’t play much in the second half. Alvin Gentry went crazy with his rotations and played 12 players, with everyone getting at least 12 minutes of run.

JJ got the start at small forward and played 27 minutes. He won’t contribute much in any cat, but the shot is still Redick, so points and tres will rain down from the heavens like manna for the Israelites.

All the stats about Favors being a beast without Gobert mean nothing if…….he’s not on the court playing! Like I said, Gentry went cuckoo with his rotations, so Favors only played 21 minutes.

The 28-year-old rookie from Italy is 6′ 9″ and 236 pounds. And boy can he shoot. Melli, not to be confused with Nelli, played 20 minutes and will likely be an important member of the rotation because of his ability to space the floor.

Played 12 minutes. I’m just waiting for the day when he shoots 0-for-4 so I can go ape shit.

If I had a Nickeil for every shot he missed, I’d be a rich man. NAW took the concept of catch-and-shoot to another level. Now, he was back home in front of 60+ family members and friends, but still….I admire the moxy though. The question is will his teammates and coaches feel the same way?

Led the bench with 28 minutes. Hart is a solid player who will contribute across the board. He is a capable shooter, but not someone to rely on in that area. Josh plays with tremendous Hart and provides the little things to both his real-life and fantasy squads.

Tied for the team lead in +/- with a +11. The shooting isn’t great, but Williams hustles his ass off and contributes across the board. When given the opportunity last season, he provided similar production. Gentry gave him 18 minutes of run. Definitely someone to keep an eye on.

The battle for LA went to the Clippers. Digging deeper into the situation, it makes sense for the Clippers to come out on top because they are ships that are able to navigate through and over lakes. You don’t get that kind of analysis anywhere else.

Simply amazing. He truly is the Terminator…..

The shots that he makes are unbelievable. Fading away, over the outstretched arms of Anthony Davis and/or JaVale McGee. The guy/robot simply does it all. The only issue is health and load management.

Got the start at power forward because Doc thought he would provide a better matchup against Anthony Davis. That deserves a:

Patterson sucks and only played 17 minutes. Yes, he can shoot from downtown but does little else. Eradicate him from your memory.

I love and respect Beverley so much, even though I’m a Lakers fan and he’s such a freaking pest. With that said, dude has fought and earned everything he’s received. From a fantasy perspective, he won’t provide many points, but will contribute boards, dimes, and some D stats.

A three-point specialist, Shamet tripped and fell into some counting stats last night. Don’t expect many of those.

Montrezl do what he do, which is bully fools down low. The free throw shooting still stinks, but he contributes in everything else but tres. Maybe if his name was Montresl.

Y’all know that Harkless is my guy. He played 29 minutes and is the best option at power forward in my opinion. He can shoot from downtown, switch on defense, and hold his own down low. I’ll be surprised if he doesn’t soak up most of the power forward minutes while Paul George is out.

Sweet Lou is a professional getter of buckets. With PG out, Lou will be the primary scoring option on the second unit. He and Montrezl form a potent duo and will beat up on most second units out there. The Clippers are going to be a problem.

Money is green, so it makes sense that Green was money last night. He’s one of the better 3-and-D players out there, especially considering draft cost. Now, he does explode offensively like this once in a while, but it’s not something to count on often. With that said, he should continue getting plenty of good looks playing alongside LeBron James and Anthony Davis.

AD showed why he’s in the conversation for the #1 player in fantasy. Other times, the Lakers had difficulty getting him the ball. This is something that will take time, but once everything clicks, AD is going to be a problem for the rest of the league. Just stay healthy. Pretty please with cherry and caramel and marshmellos and gummy bears on top.

It was not a good day, as LeBron didn’t mess around and the Lakers failed to beat the Supersonics. Uh, I mean Clippers. The shooting from downtown wasn’t great and the turnovers were high, but LeBron contributed in every other category. He looks rejuvenated and was engaged at both ends of the court. Just stay healthy. Pretty pretty please with ice cream and Oreos and Twix and Twizzlers and Kit Kat on top.

Got the start at center but only played 17 minutes because….

Got the start and played 24 minutes. A 3-and-D player who didn’t provide the fantasy D.

Played 27 minutes off the bench, the most by any Laker. A 3-and-D player who provided neither.

I’m thinking Frank Vogel plays too much fantasy football because there are too many committee situations going on….at center and the guard positions. Annoying.