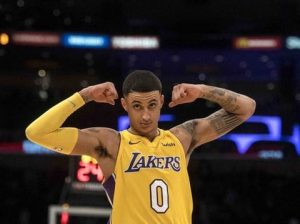 The seven threeecolas tied a career-high. Without LeBron on the floor, Kuzma has been the offensive leader, sporting a usage rate above 30. He’s averaged 34.2 minutes, 21 points, 7 boards, and 2.9 dimes. He’s jacked up 18.4 shots per game, with 7.2 being from downtown. Now, the efficiency hasn’t been good (41% from the field and 24% from downtown) and he provides little in the D cats. As a result, he’s not the best fantasy asset, which sucks because this is a fantasy website. Just let me enjoy a Lakers victory on the road in OKC with Kuuuuuuuuuuuuuuuuuuuuuuuuuuuz leading the way.

Zubac Shakur was a straight G last night in 28 minutes off the bench. Tyson Chandler got the start and played 16 minutes while JaVale McGee played 9 minutes. I have no idea what to make of the center shituation in LA. The prior five games, Zubac played 8, 11, 14, 23, and 4 minutes. Shrug emoji. When he plays, he delivers points, boards, and good percentages. Have fun trying to figure out when he plays.

Has been a top 100 player over the past seven games. The percentages suck. No, they bring debris from space into the gravitational pull and form a ring around a mass of rock. 39% from the field and 25% from the line. If you can look past that, the 2.3 threeecolas, 6.7 boards, 6 dimes, and 1.7 steals are very nice. I feel those trip-dubs coming soon. I have the same feeling regarding Luka Doncic. That’d be cool if both Ball and Doncic started messing around at the same time. I’m not sure NBA Twitter would be able to handle it.

Played 33 minutes off the bench, while starter Kentavious Caldwell-Pope played 23 minutes. Like Ball, the field goal percentage is like the vacuum at the coin-op car wash, and the usage is low, but Hart provides a little something something in every category. It’s a fluid situation regarding Hart and KCP, so the minutes and role may fluctuate, but LeBron is expected to be out for a while longer, so both should get run until he returns.

It’s good to see the dimes, but Ingram needs a lot of work on his offensive game. He’s great in transition and receiving the ball on cuts and dives. Unfortunately, his ISO and pick-and-roll repertoire are lacking. In addition, his J is still suspect.

Is this what they mean by Phyrric victory?

When the zombie apocalypse comes, I want to be on the shoulders of Adams. Over the past seven games, he’s been a top 30 player. He’s shooting 71% from the field!! That’s more ridiculous than me riding on his shoulders amongst a hoard of zombies…and being totally fine.

While Ferguson is still inconsistent, it’s good to see that he’s scored 21 points, a career-high, twice in the past four games. He’s getting the minutes, over 30 minutes per game, but he’s a low usage (11) player who doesn’t contribute much outside of threeecolas.

Got the start and played 34 minutes. The game was played in London and Enes Kanter did not make the trip, so I wouldn’t consider this the New World Order.

Noah was asked to put two of every animal on the ark. NBA Noah provides a little something something in every category.

Mudiay won’t contribute much in the D cats, but he’ll drain some threeecolas, grab some boards, and dish out some dimes. Over the past three games, he’s had an insane usage rate of 34.5!!! He’s not a top 100 player for fantasy, but he will pop off from time to time to make us all rejoice and exalt his name.

Allonzo Trier and Damyean Dotson both scored 13 points on 5-of-8 shooting. Trier played 23 minutes while Dotson received 25 minutes of run.

Continues to come off the bench but played 35 minutes. Has been a top 30 player with a usage rate of 23.7 over the past seven games.

Got the start but only played 16 minutes. Nothing to worry about, as the Knicks had Kornet bombing away from the perimeter with no real inside presence. Ian Mahinmi only played 8 minutes.

Someone needs to put a picture of Embiid’s face next to “process” in the dictionary.

Has been a top 30 player over the past five games. That’s a quiet top 30, but speaks to the floor and multi-cat contribution he delivers on a nightly basis. Random thought; since Butler voiced that he wanted to be in a James Harden-esque offense, why hasn’t there been a one-on-one tourney in the offseason among NBA players? That would be so dope. It’d be like the hoops Kumate.

Young has been en fuego, posting top 30 production over the past few weeks. He is 30 years old and an UFA next season, so the next contract will likely be his last. That’s as good of motivation as there is. The free throw shooting still stinks (63%) and the 64% from the field will regress, but Young will still provide threeecolas, boards, dimes, and steals.

Turner is leading the league in blocks with 108 and over 2.76 per game. And he’s been getting his 211 on like there was a riot or something. Remember earlier in the season when we had trouble just walking 500 Myles with Turner? Those days were so long ago.

Womp. Womp. Womp. Has been a top 165 player over the past seven games. The efficiency has been suspect, but it’s the lack of D stats that really plummeted his value.

Don’t fall for the banana in the tailpipe.

Ayton hit a wall, as he’s been a top 120 player over the past few weeks. The shooting efficiency, rebounds, assists, and points have all been down. The contributions in the D stats have been encouraging, though. You’d think that he needs Ayton of development, but he’s not too far from being a fantasy beast.

What back injury? I still worry about it, but he’s an offensive force when healthy. A professional getter of buckets. I love the dimes, but there are no contributions in the D stats.

Led the Raptors in points and shot attempts. Kawhi Leonard did not play last night, and in 207.9 minutes with him off the floor, Ibaka has a 31.6% usage rate, an increase of 7.2%. Learn something new every day.

Played a team-high 40 minutes. Lowry has a 24 usage rate with Kawhi off the court, an increase of 3.9%. Still struggling with his shot, though. Over the past six games, he’s at 32% from the field.

Has been a top 60 player over the past seven games. I’m happy to see the uptick in blocks, as that’s how he’s going to get uncle Ben’s money in the offseason.

Pretty impressive that he’s been a top 50 player without many contributions in the D cats, but over 4 threeecolas and 20 points will do that.

Played 23 minutes, while Nemanja Bjelica played 19 minutes. I wouldn’t get too excited, though, because the minutes will likely continue being split and Bagley isn’t contributing much outside of points and boards.

Played 16 minutes but fouled out. That’s impressive. I still remain intrigued by Giles, but realize that his ceiling is likely capped.

Kemba has been a top 150 player over the past seven games. I’m sure Jordan wishes he could jump into the hot tub time machine and go back to the start of the season when Kemba was flirting with top 10 value.

Played 26 minutes while Bismack Biyombo only played nine minutes. The game was a blowout and he still doesn’t play in crunch time, so I’m going to chalk up last night to just one of them days. The prior four games, he received 15, 11, 13, and 14 minutes of run. That seems like the status quo. Poor Willy will never be freed.

Before the injury, Markkanen was putting up close to top 50 value. Since returning from injury, he’s been more like a top 120 player. I lean closer to top 50 than top 100 for Markkanen as the season progresses.

Still has a usage rate over 30 and is jacking up over 17 shots per game, but the rebound and assist numbers have come down. Top 75-ish player for fantasy.

Played 19 minutes off the bench. With the Carter Administration put on hold, someone needs to step up and soak up minutes.

Only played 25 minutes because the Bulls suck.

Ha! Such a Jokic!

Led the Nuggets in scoring. Murray rebounds well for a guard, but the lack of D stats keep his value down.

Played 19 minutes in his return from injury. I’d imagine the Nuggets will bring Harris along slowly. Interestingly, or not, but Harris has scored 14 points in three of the last four games.