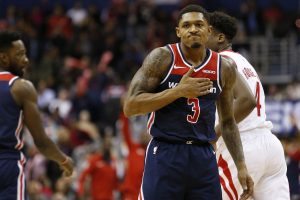 It’s a contentious time in our nation’s capital. Bryce Harper may be departing, the name White House is being taken a little too literally, and questions abound regarding the viability of the Wall. That is why I propose that we, as a fantasy nation, Kneel4Beal 2020. Good things come from kneeling: marriage proposals, getting knighted, and for you guys out there, when the wife does it….Oh Lordy. I kid. The most common reason why we kneel is to show reverence. Well…

There were a ton of great performances in the Association yesterday, but a forty burger while messing around gets the lede and all the reverence. Granted, it was during a 2OT game, but who cares. If you do, you must be real fun at parties. Since John Wall has been out (eight games), Beal has averaged 37.1 minutes, 28.6 points, 4.9 boards, 5.4 dimes, 2.4 steals, and 0.4 blocks. He’s shot 47% from the field, 39% from downtown, and 87% from the free throw line on 4.9 attempts. He’s been the #7 player. Oh, he’s also led the Wizards to a 5-3 record over that span. Walls are too expensive and do we really need one? Kneel4Beal 2020.

Led the Cavs in scoring and minutes played with a whopping 42! And he didn’t tank the field goal percentage. Osman! His fantasy ranking? Not so much, as he’s been top 175 over the past seven games.

Top 125-ish player, primarily due to the rebounds. The 2.2 dimes have been enlightening.

Since returning from injury (four games), Kuzma has a 31 usage rate and is jacking up 21.3 shots per game! 23.5 points, 2.3 threeecolas, 6 boards, and 2 dimes are nice, but the lack of D stats and poor shooting percentages (41% from the field and 62% from the line) keep him from being a great fantasy asset. He’s been the #265 player over that span.

I still believe in Ball and think the trip-dubs will flow like manna from the heavens but….I’m not strong enough to eradicate the question from my head: Should the Lakers have drafted De’Aaron Fox instead?

I’m afraid he’s going to break the simulation. He could average a trip-dub but not contribute at all in threeecolas and be absolutely horrendous from the free throw line. He’s shooting 48% from the line on 7.1 attempts over the past seven games. Hack-a-Simmons? Can teams call up guys mid-game from the G League to just foul? Asking for a friend.

Embiid got all his blocking out of the way on the court because after the game….come one and come all. Embiid gonna have a good night in NYC.

Played 44 minutes! Next year is going to be interesting because there will be three black holes on the Knicks: Kristaps Porzingis, Tim Hardaway Jr. and Knox. Anyways, Knox is a bonafide scorer who will provide points and threeecolas. He will grab some boards but won’t contribute much else. Top 170 player for fantasy.

Played 34 minutes. Fizdale went with a starting unit of Vonleh, Thomas, Knox, Mudiay, and Dotson. Burke, Lee, Hardaway, and Kanter did not play. Kornet can shoot. There’s no doubt about that. It’s the playing time that’s the issue.

Lowry is a relatively low usage player, but he does dish out plenty of assists, and those don’t factor into usage rates. The main issue for Lowry has been the shooting percentage, as he’s been shooting 35% from the field over the past few weeks. Man, seems like forever when Lowry was playing at a top 20 level.

If you are new to the program, welcome to the Danny Green experience. It’s like Whack-a-Mole. Up and down. Up and down. Good luck trying to figure out from which hole the mole goes up.

Such a solid player who contributes across the board and doesn’t turn the ball over. Unfortunately, he only averages 20 minutes per game.

Aaaaaaaalmost messed around. Ariza is a solid fantasy player, as he scores in double digits and contributes in everything but blocks. The shooting percentage sucks, though.

Played 34 minutes, while Ian Mahinmi only played seven minutes. Good to know that the lack of playing time the last few games was matchup related.

Played 44 minutes off the bench. The past seven games, Otto has been a top 40 player. The most encouraging things have been the increase in usage rate (24.2) and the fact that he’s been playing the 3, 4, and 5 positions.

Who breaks the simulation first? G or Simmons? Or did Harden already do that?

The shooting percentage from the field has returned, but now the free throw shooting has been bad (69%). Warm it up Khris!

To make my life easier, I’m just going to assume he dub-dubs every game and only write him up when he doesn’t.

Got the start because Dewayne Dedmon was out (ankle) and played 30 minutes.

Continues to start and played 32 minutes. Inconsistent, with the highs being high and the lows being low, but should continue to get run as long as Taurean Prince and Kent Bazemore are out.

Over the past eight games, Young has been a top 130 player. We know the turnovers are high while the field goal percentage is low. The 4.1 rebounds, though! Impressive stuff for a player of his stature.

Has been a top 15 player over the past seven games. The points, boards, blocks, and field goal percentage are what you can expect on a nightly basis, but the 75% shooting from the free throw line on 6.4 attempts has been a pleasant surprise. I have my doubts it continues but we shall see.

Ha! 1-for-17 from downtown, yet he still drops 38! His usage rate over the past couple weeks has been 44.3! If that doesn’t get you Harden excited, you need to check yourself into the ER pronto.

Continues to start and played 37 minutes. He still sucks but he’s playing a shit ton of minutes and has the green light.

I really want to like Gordon. He has such tantalizing physical gifts and skill set, but he doesn’t have that dominating quality to elevate him to the elite stratosphere. At least not yet. Will he? I’m beginning to have my doubts, but I’m still holding out hope.

The elevated usage rate and production from Nikola Vucevic has negatively impacted Fournier. At least that’s the only explanation I can come up with.

Maybe we’ve been looking at all this wrong. Maybe Durant is actually the robot. The consistency is out of this world.

Hahahahahahahahahhahahahahahahahahahah. That’s all you can do when you see his stat lines. He’s the #3 player on a per game basis right now. Over the past four years, he’s finished as the #2, #3, #1, and #2 player. Maybe it’s actually Curry that’s the robot.

Continues to start and played 26 minutes. With J. J. Barea (Achilles) and Dennis Smith Jr. (back) out, Kleber could remain in the starting lineup. Boards, blocks, and some threeecolas with excellent percentages.

Should be inducted into the Uninspiring Hall of Fame. It’s not fun rostering him, and you don’t expect much, but he’ll provide points, threeecolas, boards, and steals for top 90 production.

I heart Luka. With that said, the shooting percentages haven’t been great. Over the last eight games, Luka’s been shooting 42% from the field and 65% from the line. He also doesn’t contribute much in blocks, which makes him a top 100 player for fantasy. I still heart you Luka. The trip-dubs are going to start flowing. And when it does…..Halle-f’ing-Luka.

I miss the Jordan that would actually get blocks.

Played 30 minutes off the bench. With Barea out, Brunson should get plenty of run. Don’t expect much D stats, but Brunson could provide some threeecolas, rebounds, and assists.

Boards, threeecolas, and steals on a fairly consistent basis. Sometimes knowing what you’re getting is a valuable commodity.

Ha! He literally does it all. Pick-and-roll action with another big. And he initiates it by running by the screen then getting the hand off. Such a Jokic!

Murray is averaging a whopping 16.5 shots per game! Unfortunately, the shooting percentage has been in the 41-42% range. He’s a top 100-ish player who contributes points, threeecolas, boards, and dimes. There are some steals but the blocks are light.

Considering that im punting Pts, would you make the following trade :
My CP3 and Horford for Bledsoe and Draymond Green?

So J-Val is sitting there as a FA in my league, I know, not very exciting..

I noticed during Toronto’s game over the weekend, that J-Val was on the sidelines with the team, active in the huddles during timeouts, & he’s not wearing any splint or brace on his injured thumb. also read he could beat his timetable, And I’m gonna say he’s back in 3 weeks MAX..

Nobody else is even close, as far as that goes. Still not very exciting tho. Yawn.

I moved on from Bamba, grabbing Giles couple days ago.. Giles is expendable,

What do you think about swapping / stashing J-Val for next few weeks ?

I still want to give Giles a chance. Plus, I think it’s a little too early for JVal. I think you could scoop him later. With that said, you know your league better than me, so if you think he gets scooped, I have no issue grabbing him.

Gonna press my luck, rolling Giles out there tonight. See how it goes.

If he flops tonight (Minutes in the teens) See ya!

If he fills the D stats like i want in a 20 minutes roll, he buys himself another day.

@Mr. Blast: You are a fair, yet tough owner

1. Better stash on IR, Bazemore or Rondo?
2. Carter JR is hard to roster especially given his horrible playoff schedule. Wire is awful but would you Drop him for JaMychael, Burks, Smart, Wade, Rondae? Or hold and wait for better wire option down the road?

My team for context in a 12 team H2H league. Sitting in second place.

@JC: Bazemore for me. Big men are too valuable to drop. I’d hold off

I’ve run into a bit of an injury problem and I’m not exactly sure what I should do. I’m in first place by 5.5 games over second and 17.5 games versus the playoff cut line, so my strategy was to stay patient and stash my guys. However, I took a 6-3 loss last week and the panic started to set in. I have two IR spots which are being occupied by Kevin Love and Caris LeVert. I also have RoCo and Nance eligible for those spots. We have three bench spots so as you can see I’m running low on space for these guys. Should I continue to stash or should I move on from someone. My main concern is that a future playoff opponent might pick up someone I drop to stash and hurt me down the road.

@Steve: I’m skeptical that LeVert and especially Love will have much impact, but I understand if you do. So, all you can do is hold them to appease your fears and anxiety. I’m holding RoCo so Nance would be the guy I’d be most inclined to drop. He’s best when he plays the 5. Now that Tristan is back, access to ceiling is limited me thinks. As always, it depends who you’re dropping players for.

@Son: Thinking about adding T. Bryant for Nance? Just need another body to keep up in the counting stats.

@Steve: I’m good with it

ROS, do you like Eric Gordon or Huerter (I know he’s your guy…). Thanks!

@Ace: or would you trade millsap + dinwiddie for cp3 + bogbog ??