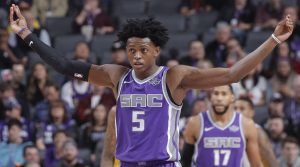 We live in crazy times, when nothing can be trusted. That tweet? Better check for the blue mark and read the name AFTER the @. That picture or video? With photoshop and other editing software, it can be very difficult to distinguish what is real and what is fake. The boobs or the butt on the girl from across the room? How about a free trial period? Oh geez, that didn’t come out right. A certification of authenticity perhaps? The news? It’s always been used as a tool to further agendas and “inform” the people, but the lack of objectivity and amount of Hollywood-esque manipulation these days make my head hurt. Thank goodness for sports and De’Aaron Fox.

Fox messed around last night, but it was all good. Entering last night’s game, the Kings were 5th in offensive pace. Fox has been a huge reason why. Anyways, he can score, grabs a good number of rebounds for a guard (4.6), is dishing out 7.8 dimes, and is shooting 50% from the field. Holla! Not all is good, though. The free throw percentage is only 67%, no threeecolas, and the turnovers are high at 3.3. Fox did shoot 72% from the line last year, so there’s reason for optimism. He’s only 20 years old and this is his second year in the league, so improvement should be expected. Fox is currently the 79th player according to Basketball Monster.

Performed this masterpiece in a team-high 36 minutes.

Has a freaking 29.7 usage rate for the season. Unfortunately, he’s only averaging around 24 minutes per game.

Played 24 minutes. It used to be Mario with the D because….uh….he made the ladies and fellas happy. Now it’s Mario with the D because of all the frowns in the house. Is currently the 228th player according to Basketball Monster. Some are speculating that he’s worn out from playing for Croatia in the FIBA qualifiers over the summer. Mario with the D is an important member of the 76ers because he’s a big that will bang down low, but also space the floor. He’s currently shooting 35% from the field and 23% from downtown. His career marks are 42% and 34% respectively. I’ll side with the career numbers here.

Only played 21 minutes. Is it happening? Fultz has made progress for sure, as he looks more confident and aggressive. With that said, he’s got a long way to go. For fantasy? He doesn’t contribute in threeecolas or blocks and has poor shooting percentages from both the field and the line. Boards, dimes, and steals are what you’re getting. Fultz is the 204th player according to Basketball Monster.

Remember those cartoons that had the rainy cloud that would follow a character around where ever he/she went? That’s Embiid’s life, expect the cloud is a line of men and women that want to have sex with him. Beep. Boop. Bop. What’s the Stocktonator doing in line? Oh, it loved him last night, as it had Embiid as the #4 overall player.

The Kings destroyed the Hawks, 146-115 in Atlanta. Class, what have you learned so far this semester? When the Kings are involved in a blowout, Marvin Bagley III gets run: 18 points, 5 rebounds, and 1 steal in 24 minutes. You are dismissed.

The Fox got the best of him this time, but Trae is Young enough to get his revenge.

It got so bad for the Hawks that Jeremy Lin played 23 minutes and scored 23 points. Yes, you in the back, your question? Don’t be Linsane.

OG. Original. Offensive. Ain’t nothing but a G thang.

Played 29 minutes. May be the steadiest player in fantasy with the narrowest band of outcomes. Will languish in the 90-100 range for fantasy. Double-digit points, 4 rebounds, 3.5 dimes, a few steals, great percentages, and low turnovers.

With Jaylen Brown out, Semi Ojeleye got the start.

High energy player that can shoot from downtown, Ojeleye is irrelevant when the Celtics are healthy, but can provide threeecolas, boards, and steals if he gets run.

Horford is like one of those stocks that you just put in the portfolio and just check the profit at the end of the year. So steady that you don’t need to check the day-to-day, minute-to-minute ticks up and down.

Y’all calm now? It just took him a bit to get back into the groove.

What a freaking Jokic?! The Nuggets were on the second leg of a back-to-back, so Malone utilized his bench more last night. That’s where the Cavs are now.

A career 36% shooter from downtown, we’ve always known Juancho could shoot. It was just a matter of getting the minutes. Tada! Played 29 minutes. Good streaming option if you can identify blowout possibilities and/or rest scenarios like last night.

I think he sucks, but he’s getting 35 minutes with Kevin Love down. Have fun.

Welcome to the Hood.

Played 28 minutes last night after getting 29 minutes the prior game. If you need boards and a busted free throw percentage, then Tristan is your man.

An x-rated shooting performance, but PG displayed his super-high floor by contributing in the periphery categories. 7 stocks is quite impressive. The 0-for-10 from downtown may be more impressive, though.

When you get a new car, you are supposed to break in the engine by keeping the RPMs at a reasonable level. After some time, then you can put the pedal to the metal. The Russ-mobile is all revved up and ready to go. Those triple-dubs are going to start raining down like manna from the heavens.

Played 30 minutes. It wouldn’t surprise me if he started playing more because Ferguson doesn’t do much on offense. Too bad Abrines sucks on D. Is someone in the lab breeding these two? Will the offspring be ready in time for the playoffs?

All of you waiting for Willy Hernangomez to be freed are like the PETA protestors in the parking lot of Sea World. It ain’t happening. Zeller is the guy, for better or for worse. He’s getting high-20s in minutes and grabs boards, blocks a few, and passes well for a big man.

Played 23 minutes. Should settle into the 20 minute range. He puts up shots in the limited time he plays and provides cheap assists. Don’t expect anything else.

Also played 23 minutes. Monk scores and provides threeecolas. Doesn’t do much else. Needs a trade or injury to happen. He is currently the 139th player according to Basketball Monster.

Missed his third game in four games due to an elbow injury.

Jahlil Okafor got the start for AD. Played 14 minutes and scored 6 points with 5 rebounds. Don’t even think about it.

With Elfrid Payton out, Tim Frazier got the start at point guard.

Played 30 minutes. His name is not spelled Jahlil Okafor, so sure.

Played 26 minutes. He’s a bull, no doubt about it. For fantasy, though, not even a top 100 player. With that said, he plays in one of the most fantasy-friendly environments out there.

Played 33 minutes and contributes points, rebounds, threeecolas, and some blocks. Solid player in both real life and fantasy. Will never win you a week, but provides what you expect from him. There’s value in that.

Relishing in his role as the lead dog of the second unit. The true shooting percentage is at a career-high 54% and the assist percentage is at 24.6%. That number was at 12.4% last season. ET phoning home to tell his people that he’s the 129th player according to Basketball Monster.