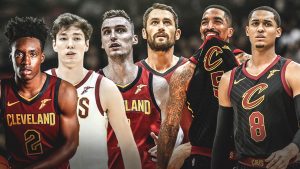 I try to reserve the lede for players that had unbelieveable games. It usually works out because one of the superstars is always doing something amazing. Every once in a while, though, an outlier happens which pushes all others to the wayside. Last night, we had one of those events, as the Cleveland Cavaliers celebrated their first win of the season over the Atlanta Hawks. Geez, how bad are the Hawks? Anyways, the Cavs are dead-last in defensive efficiency and near the bottom in offensive pace, assists, efficient field goal percentage, and true shooting percentage. Good times. Looking at the schedule, they play the Hawks once more on December 29th. 2-80!!!

When looking at the stats below, make sure you view them in the proper context: they played the Atlanta Hawks.

Played 29 minutes and is filling in for Kevin Love. The answer to your question is no. Next.

Led the team with 34 minutes. He’s getting the minutes and does contribute in the periphery cats. The shooting efficiency has been painful to deal with, but it is what it is.

That’s when you know things are going good.

Is getting the minutes and shot attempts, but he’s a mental midget, so I always have a hard time rostering or utilizing him. With that said, he’s scored double figures in all seven games. Godspeed.

Does not compute. What are they saving him for? The playoffs?

The Nemanja is potent and smoking hot in Sacramento. Don’t look now but the Kings are 5-3 on the season, and that’s important because Bjelica plays over 30 minutes if the games are competitive. He may end up being the best free agent acquisition in real life and fantasy player that outproduces his ADP (#148 overall) the most. Entering last night’s game, the Nemanja was the 20th player according to Basketball Monster: 14.3 points, 6.3 rebounds, 3.3 assists, 0.9 blocks, 1.3 steals, and 2.1 threeecolas.

So bad that it was impressive.

Played 30 minutes. That’s four straight double-dubs (points/rebounds). The 3 dimes and 1 steal per game are nice, but the free throw percentage is garbage and the blocks are lacking. Willie needs to go hit up Mutombo. Regardless, Willie is balling out to try and win Uncle Ben Stein’s money.

Was questionable to play, but ended up gutting it out. Fox is a vital reason why the Kings have a winning record and are playing at the third-fastest pace in the league. Last season, they were dead last.

We must all bow down and ask for forgiveness from Vivek.

Still raw on offense, but the athleticism jumps off the screen. Points, boards, and D stats he will provide, but will top out in the low-20s for minutes, unless the game is a blowout.

Played 34 minutes! The Kings signed the 6′ 7″ 210 lbs, 23-year old Williams to a two-way contract last week for wing depth. Have you seen Justin Jackson play? Anyways, Williams has played a few games with Memphis, Houston, and the Knicks. Not a great shooter from downtown, he will grab some boards and get his 211 on. Minutes are gold for fantasy, so keep an eye to see if he continues to get run.

What is Gordon’s potential? Can he/will he ever get there? He’s got the height, agility, hops, stroke, handles, and provides the D. He’s inconsistent, but still only 23 years old. I hope we get to see it. For fantasy, the percentages are no bueno and the assists are not plentiful. Plus, the turnovers are a tick high. Currently, he’s the 149th player according to Basketball Monster. Last season, he ended as the 65th player.

Still only 21 years old, we expected too much too soon from Isaac. Played 25 minutes and had a usage rate of 13.8. Should continue to improve as the season progresses, but he’s not going to be the stud we thought he’d be. Silly humans.

Is the 12th player according to Basketball Monster. Is literally doing it all and could once again be in the 1/1/1 club.

Lots of Fournier owners are worried. And for good reason, as he’s 18-for-54 in his last four games. Patience grasshoppers. He’s getting the minutes and opportunites. I’ll side with the career 44% from the field and 37% from downtown.

Played 24 minutes and should continue to get more run and experience as the season progresses. A b&b player with the occassional threeecola. La Bamba!

Played 27 minutes. Like shopping at Ross Stores, you get what you pay for and never know exactly what you’ll find.

Just needs to stay healthy. Good luck with that.

Lou is averaging 24 minutes per game. Not sweet. He’s scored in double figures every game so far, but the only other contributions are 1.5 threeecolas and 3 assists per game.

Clippers got waxed by 18, so no more blurbs for them!

Was slaying the Clippers D so bad that parents had to cover the eyes of their children. Definitely not PG.

Returned from a one-game absence and did what he do. The free throw percentage sucks, but Adams contributes in everything but dimes. Kiwis are greedy.

Played 34 minutes, but you can tell he’s still hurt. Not even close to messing around.

Played 38 minutes. A lot of Otto owners are worried. Patience grasshoppers. As Bob Marley sang, “Everything gonna be alright.”

9 turnovers?! Good for someone with the munchies, but bad for fantasy basketball.

Played 24 minutes because Markieff Morris did not play due to concussion symptoms. The answer to your question is no.

Played 29 minutes off the bench. Will score, grab boards, and provide some threeecolas. Other than that? Nada. Zilch.

Continues to start and played 28 minutes due to the Chandler Parsons injury. Think about that for a sec. Minutes are high, but usage is low. Good thing Mr. Anderson contributes in the periphery cats. I’m not excited. Makes me want to slow my ass out the door.

Marc be acting like a smooth criminal. 5 steals! But that free throw shooting. He deserves to go to jail.

Continues to start and played 36 minutes last night. Averaging 13.2 points and 1 steal so far on the season. Shooting 46% from the field and 50% from downtown! He’s a career 40% shooter from the field and 36% from beyond the arc. Say hello to my little friend (in Al Pacino voice)…Mr. Regression.

Played 30 minutes! He had played 16 minutes the prior game and was averaging around 23 minutes for the first four games of the season. Return of the Mack?

Has the potential to double-dub on any night. Unfortunately, Nurkic is so inconsistent. He’s missing some from the awe.

Played 24 minutes and will probably settle in this range. Likely a big part of the future, Collins can stuff the stat sheet. Still, he’s only 20 years old and the depth chart is crowded in front of him, so keep expectations in check.

Houston….we have a problem. Lost 104-85 at home to the Trail Blazers. The Rockets are 1-5, James Harden is nursing a hamstring injury, are 19th in offensive efficiency, and 27th in defensive efficiency.

Not sexy, but contributes across the board. Currently the 40th player according to Basketball Monster.

Did exactly what you drafted him for. Boards, blocks, and trashing your free throw percentage.

Immediately called Jake from State Farm after the game for consolation.

My momma always taught me that if you don’t have anything nice to say about someone, then you shouldn’t say anything at all. Thanks momma.

Mario with the D did not and has not been providing the D. That groan was from millions of ladies in Philly. And a few thousand men that own him in fantasy. He’s grabbing close to 8 rebounds per game, but is only shooting 35% from the field and 23% from downtown. His career averages are 42% and 35% respectively.

Sometimes the Lord giveth and the Lord taketh, but once in a while, the Lord provides. Keep up the prayers.

Played 33 minutes on the second of a back-to-back. Hallelujah! 11th player according to Basketball Monster.

Iblocka is back!!! That makes me so happy.

Played 33 minutes after receiving 33 and 37 the prior two games. Now, OG Anunoby has been absent, which explains the increase in minutes but….how can Nick Nurse put this genie back into the bottle?

Beep. Boop. Bop. Has anyone ever seen Kawhi and the Stocktonator in the same room?

13th player according to Basketball Monster.

Got another block, which gives him four on the year. He’s earning that B this season. So far, Blake is averaging a career-high number in shot attempts (20.2), is shooting above 50% from the field for the first time since 2014, is averaging 10 rebounds a game (first time over 10 since 2011), and is scoring a career-high 28.4 points. See what getting rid of a Kardashian can do for you?

Tied for 9th in double-dubs with four. Everyday is Dre Day.

Remember what I wrote in the Johnathan Isaac blurb? That.

Finally. It’s been a brutal start to the season for Kyrie and his owners, but it was just a matter of time. Now, I think the ceiling has been lowered a bit, due to a decrease in minutes and usage. With that said, he’s a professional getter of buckets.

Played a team-high 35 minutes! Wayne Ellington did not play, even though he was available. I’d hold onto McGruder. I wasn’t able to watch the whole game, but I caught the first half and was impressed. He doesn’t just stand around and wait for things to come to him. He’s aggressive at both ends of the floor, which is why he’s endeared himself with the squad and coaching staff. Continue to hold until he starts ceding minutes.

Did nothing in the first quarter, yet ended up with another double-dub. I actually think Bam is more active, but he only got 15 minutes, and minutes are king. Hassan played 29 minutes.

Played 30 minutes. Forget what I said about minutes being king. I kid. Winslow won’t provide much O, but will contribute in the periphery cats. Not enough to get me excited though.

Played 25 minutes. I guess you could do worse, as Wade can still drop 20 on any night and is even contributing threeecolas this season. Just don’t expect much consistency.

The minutes are there and so are the contributions across the board. Batum is always a threat to mess around, but can be passive on the offensive end at times.

Played 25 minutes. Willy is not getting freed, so Zeller is the guy at center for the Hornets. Won’t wow you, but is the 79th player according to Basketball Monster. Cheap big man.

Played 26 minutes after receiving 23 the prior game. The shot is disgusting, but he’s been getting some minutes and is a b&b player. Borrego has been utilizing MKG often when he wants to go small, so…..minutes are king?

Played 25 minutes. Probably won’t see over 20 minutes a game often, but he can still score and be a cheap source for assists. Oui oui.

Played 24 minutes, while Jeremy Lamb only played 19. It’s tough for me to get excited about Monk, though. If he starts or gets more minutes, I’d think about it, but what does he really do for fantasy? He can score but is shooting 35% from the field. From downtown, he’s 34%, so that’s not bad. Outside of that, he’s not providing much: 2 rebounds, 2.1 assists, 0.6 blocks, and 0.6 steals. I’m expecting an envelope filled with Ricin from Craig soon.