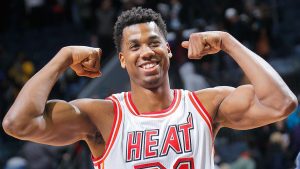 Volcanoes are fascinating objects. They tower into the sky and blot out the horizon. Inside, there is magma that is being pushed up from the Earth’s core that is searching for ways to lather the surface. Now that I think about, they are the Earth’s pimples. Ewww. They are no laughing matter, though, because when they do erupt, the lava flows create a path of destruction and the smoke and plume can erase the sun and prohibit planes from flying. Yet, they can also be vehicles of creation, as many of the Earth’s island masses are formed as a result of the lava flows from volcanoes. Like I said, fascinating. Which brings me to Hassan Whiteside, one of the NBA’s most fascinating players. He’s 7′ 0″, 265 pounds, so he does blot out the horizon on the court for many and pummels the rim with a ferocity unmatched by many. Yet, he’s quick and nimble on his feet to hunt down rebounds and chase blocks. Inside, though, is a swirling mass of unknown, as he can disappear on the offensive end at times. But volcanoes eventually erupt, and that’s exactly what happened with Mt. Whiteside last night:

For the season, Whiteside is the 38th player according to Basketball Monster. You’re getting elite rebound and block numbers with above average field goal percentage.

Awesome game, no doubt, but here’s something to put a damper on Dre Day. He’s the 93rd player according to Basketball Monster because of the 3 turnovers per game, 54% shooting from the free throw line, and no threeecolas. In addition, the assists (1.3 vs 3) and steals (0.8 vs 1.5) are way down from last year. Party pooper that Son is. Beep. Boop. Bop. The Stocktonator never poops the party, as it had Dre as the #7 player last night.

Played 22 minutes. The production from this Johnson has been up and down all season. That’s what Johnson’s do, right?

Just another day without a block. Ricky Lake is back!

Can’t wait until the Commissioner starts handing out justice on a nightly basis.

Played 31 minutes. Not exciting, but this DJ delivers dimes and threeecolas. It also helps that Jerian Grant is his immediate backup. Most secure starting job in the league.

After a tepid start to the season, Fournier has been en fuego the past four games. It was just a matter of time before he started shooting better. He’s averaging over 15 shots per game, dishing out 4 dimes, and has a 25.5 usage rate. Over the past week, he’s been the 57th player according to Basketball Monster.

He’s getting the minutes (28, 30, and 31 the past three games) and jacking up the shots (12 per game). 1.9 threeecolas and 1.3 steals per game on the season ain’t bad either. A handful of rebounds and assists? 129th player according to Basketball Monster. Not bad for shopping at Ross.

LMA-O! How many of those boards were from his own shots? It’s always mentioned that a shooter knows best where the ball is going. LMAO!

Derrick White got the start at point guard and played 16 minutes.

First game back from injury. The Spurs did go small with LMA at center and the rest of the lineup consisting of Dante Cunningham (why?), DeMar DeRozan, Bryn Forbes, and White. Eventually, I’m thinking White takes over at point when he’s ready with Forbes backing up DeRozan.

Have you ever seen a pair of double-D’s? Well, that same expression has been on my face everytime I see DD’s line.

Played 26 minutes because Pau Gasol and Rudy Gay did not play. Bertans is a big man that can stretch the floor and provide threeecolas. That’s about it.

Played 12 minutes. That’s how you know Pop was in need of players.

General played 28 minutes and launched a season-high 22 shots, with 12 from downtown. Pop was not happy with his starters, so Mills got some extra run and usage. An outlier game.

Played 37 minutes. Not the best shooting night, but McGruder has a relatively high floor due to his ability to contribute in the periphery cats. The more important thing to take away from last night, though, was that Wayne Ellington got the start and played 37 minutes, yet McGruder still got his run. Woo hoo! Before we crown his ass, though, Goran Dragic did not play so there’s still a chance that he gets bumped. Stay tuned.

Welcome to Wayne Manor. We apologize for being closed earlier in the season, but there were some renovations that needed to be done. Please enjoy the rest of your stay.

My RichardSON be shooting with no regard for life!

Played 32 minutes. What’s up with all the Johnson’s sucking last night?

Got the start and played 36 minutes. Must’ve been inspired after watching Zion the night before.

Will the real LaVine, please stand up? Please stand up? Oh, there he is. The contributions in the periphery cats are very promising, though. Maybe that Brent guy does know what he’s talking about!

Played a season-high 33 minutes. Averaging 25.4 minutes per game with 6.9 points, 5.4 assists, and 0.9 steals. The shooting percentages are very nice (50% from the field and 45% from downtown), albeit in limited volume.

Poor shooting night. Was Bobby Portis in the stands pounding his right fist into the palm of his left hand while winking at Mirotic?

Davis went to the locker room twice, once after landing on his back and the other after getting hit in the face, but he gutted it out. Not something I thought would ever be associated with Davis, but whew….crisis x2 averted.

Aaaaaaalllmost messed around. I love the Holidays, as they don’t take nights off. Beep. Boop. Bop. The Stocktonator also never takes time off. Maybe that’s how it knew Holiday would have a big night.

Played 35 minutes and scored a team-high 24 points. Luka for President! Son, the POTUS has to be born in America. Change the damn rules!!!

Eight double-dubs on the season and has grabbed at least 10 boards in every game.

Top 100 player, because of the threeecolas, free throw percentage, and low turnovers. If he starts contributing the boards and dimes…..Why is there a tent in my pants?

Three straight games failing to score in double-digits. The turnovers are higher than last year and the shooting percentages are much lower. I’m not worried, though, as I expect those to bounce back. Ingles has a relatively high floor due to his contributions in rebounds, assists, and steals.

Able to do that before fouling out. Entered last night’s game tied for fifth in blocks with 22. Should be top 3 now, but still well behind JaVale Freaking McGee, who had 34 blocks entering last night’s game.

The Ricky metronome continues to operate. I initally used the name because his performances alternated between good and bad, but after listening to the above video, it’s an apt name because it’s equivalent to Chinese water torture, which is exactly what following Rubio’s day-to-day fantasy production is like.

Only played 18 minutes. Keep him in mind if injuries strike, as we know he can score.

Played 26 minutes and shot one time. One! The Grizzlies grit-and-grinded their way to an 89-87 victory. What a freaking Jokic!

Played 28 minutes. More of this please! Won’t happen, though, as he’s been averaging around 20 minutes per game. Would monitor any increases.

Sneakily is putting up a top 20 fantasy campaign!

Not so sneakily is crapping the fantasy bed.

Only played 19 minutes but provided what he offers: cheap dimes and threeecolas.

Mario with the D finally powered up with the magic mushroom!

Yawn. Call me when he does something spectacular.

The Lord delivered on a Wednesday. Praise be the Lord.

Simmons is The One. He just hasn’t eaten the red pill yet.

Played 23 minutes. Averaging 23.7 minutes in the four games this month. He’s also scored in double-digits in each of the four. Shamet is a threeecola specialist who won’t contribute in much else.

Played 18 minutes. Thanks for playing.

Played 31 minutes. Still behind Collison, who kind of sucks. I’d keep a close eye on this situation.

Iblocka!!! Played 28 minutes and is providing a Serge of excitement for his owners.

Has missed three games so far this season, and he will likely miss more down the road. With that said, when he’s played, he’s been amazing….like 3rd player overall amazing.

Played 20 minutes. I feel like JV double-dubs every night, yet when I check the game logs, he only has two on the season. Hmmmm. Anyways, JV only gets around 20 minutes of run a game, yet he’s super productive in his brief time. How productive you ask? He’s a top 50 player for fantasy.

Only played 19 minutes. Sometimes you get a bad batch of Nemanja. It happens. The contributions in the periphery cats are nice to see, though.

Played 33 minutes. Cauley-Stein is trying to win that money. For fantasy, he’s just outside the top 100 due to his poor free throw shooting and lack of threeecolas. Also, for a big man, the 0.5 blocks per game is pathetic.

The shooting efficiency has really picked up recently, especially from downtown: 8-for-13 from beyond the arc. He’s getting over 32 minutes of run a game and is averaging 17.5 points, 6.9 dimes, 3.9 boards, and 1.5 steals. Will likely be a top 100 player soon.

Continues to ball out. Lesson learned. Don’t fade the guy that’s a self-made billionaire. Got it.

Made his season debut and played 18 minutes. He will probably be brought along slowly, but is someone that I was high on entering the season and could see making a nice impact down the road.

Played 39 minutes. No one believes in Noah (psssst, I have). It’s not like he’s claiming to have an ark that houses two of every animal on the planet to shelter from a cataclysmic flood!

Continues to start but only received 15 minutes. Patience grasshoppers. I’m a little baffled that the Knicks are not in full “Not Trying for Zion” mode yet.

We got ourselves a shooter ladies and gentlemen! Place those bets. Hardaways. Come line.

Played 30 minutes. All he does is double-dub, as that’s his eighth on the young season, which is top 5 in the league. The Knicks need to trade Kanter because he’s trying to hard, which conflicts with the “Not Trying for Zion” campaign.

Played 22 minutes. Fizdale is trying to make Mudiay a thing, isn’t he?

Played 36 minutes! This after playing 42 minutes the game before. Granted, the prior game was with Hardaway Jr. out, but he was back for this one and Trier still got run.

The rookie got the start and played a season-high 28 minutes. Spellman is an interesting player because he’s 6′ 9″, 245 pounds, so he can bang down low but has the stroke to drain threeecolas and the athleticism to get stocks. Me likey.

Played 31 minutes. I think he’s ready to get back into the starting lineup.

The Taj, a lovely place to visit.

My eyes hath done deceived me. I ask for an audit on this stat line, please.

Played 37 minutes. We have received footage of Rose in the locker room:

Hey, don’t look at me. DRose is the captain now.

Aaaaaaalllmost messed around. DRose is the captain now?

Doesn’t contribute much in the periphery cats, but Kuzma is still the 77th player according to Basketball Monster. Points, threeecolas, rebounds, good percentages, and low turnovers are what you get.

140th player according to BM. Ingram could join the 1/1/1 club, as he’s currently at 0.9 threeecolas, 0.9 steals, and 1.3 blocks. The dimes are low, probably because he smokes his own supply. Anyways, the turnovers are high and the free throw shooting isn’t great.

McGee played 25 minutes, while Chandler played 23 minutes. No way McGee sees the 28-30 minutes per game he was getting prior to Chandler’s arrival.

Played 21 minutes. Is this what Rondo has been teaching Zo? This could be a shituation all year long.