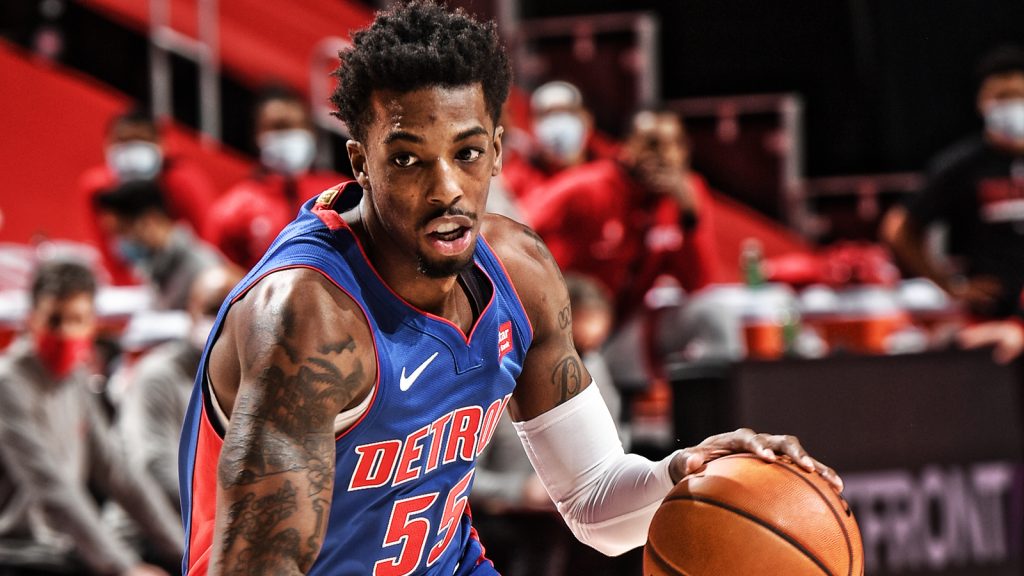 Patient owners are being rewarded with Mr. Wright. This line is extraordinary, but there’s really no reason Wright can’t put up a nightly 12/4/4 with a smattering of defensive stats. Of course, Rose was out for this one.

The last remaining Plumlee has been slowing down as of late, but he’s still a good source of boards and out-of-position assists. The FT% is coming down though, as expected.

Ellington currently has control over the starting 2 spot. That could change, seeing as how the Pistons are in contention for the worst team in the league. But as long as he’s starting, he’s worth a look if you need points and threes.

Damn, Harris has been e-lite this year. Percentages, counting stats, you want it, he’s got it. Only starter who showed up to play for Philly tonight, unfortunately.

In just 17 minutes played! The return of Seth Curry hurts Maxey’s ROS outlook but it can’t hurt to keep an eye on him, especially if he starts eating into Shake’s minutes.

Stormin’ Norman played 40 minutes tonight with Lowry in foul trouble, and chipped in some boards and assists. The low TO rate is buoying his fantasy value, but he’s a little too inconsistent to rely on.

The efficiency has been bad but tonight VanVleet was locked in, dropping 25 on 52% shooting.

Low-key a passable line from the former lottery pick, who has been logging minutes in Casey’s rotation for some time now. Still not worth rostering.

The FG% tonight was a yikes. Overall, I foresee Boucher’s astronomical FG% dipping, seeing as how he’s currently shooting an unsustainable 48% from deep on over 3 attempts per game.

Had to head back to the locker room after banging knees with Kyle Lowry. Shouldn’t be anything too serious, but all bets are off with this wacky season.

Just 3 blocks? Get your shit together Myles!

Is this guy good or what? Shows no signs of slowing down, though it’s worth noting he is among the league leaders in minutes played. Bjorkren loves running the Sabo-Brogdon two-man game.

Could be a sneaky value if Sabonis has to miss time. Blocks and boards guy, with a fine mustache.

Yup, there will be plenty of Lamb to feast on until T.J. Warren comes back, and even then it’ll be some time before Caris LeVert returns to action. A mid-rounder til then — anything past that and we’ll play it by ear.

Gordon Hayward doing it all. Good for top-25 on the season.

Hasn’t been completely phased out by the return of Cody Zeller yet, though his already-negligible value will soon be gone. A decent goodbye line.

Would have been a totally empty line were it not for the block and steal Terry chipped in. 24 pts, no boards, 0-2 from the line but 10-18 from the field? Weird Terry is more like it.

Flirted with a triple-double. I might have been too harsh on Gordon in the past, and I will continue to do so in the future.

The efficiency woes seem to have been alleviated by the return of Evan Fournier, which has lifted some of the scoring pressure. Wouldn’t hurt to take a flier if he was dropped in your league.

Welcome back, Fournier. Keep the 3s and steals coming.

Continues to have his way with opposing centers. How did the neophyte fix his FT% in just one offseason? Looks bad for some of his peers around the Association, I won’t name names.

Continues to be a solid starter for Spoelstra’s Heat. Top-120 so far.

The big head of Brooklyn’s very own Cerberus shot poorly from the field tonight, but managed to save his line with tons of boards and some defensive stats. You know how they say the league is better when LA and NY teams are good? It always sounds kind of silly to me, but I guess I know what they mean. Fantasy’s more fun when KD’s producing at an elite level.

Didn’t do much in this low-scoring affair.

The third Cerberus head has the lushest facial hair. The Beard contributed across the board, even though the scoring output was not what we’ve come to expect. Hasn’t eclipsed 25 pts in the last four games as he gets acclimated to the new system. Note that I say system in the loosest sense of the word.

If you just ignore the low scoring output and poor shooting, this is pretty much the ideal statline. If.

Might just be the best basketball player on the planet, at age 36.

Cedi wanted to show Bron what he’d learned and how much he’d improved. He performed admirably, but was overshadowed by greatness tonight.

Every year, trade rumors beleaguer Drummond and whatever team he’s on. And every year, without fail, he produces. It looks like he’ll be moved before the deadline once again, but it’s likely he just does more of the same no matter where he goes.

Another day at the office for the Joker. His vision comes at a cost, averaging over 4 TOs a game.

Can always be counted upon to be a decent streaming option at some point. Did his damage in 22 minutes.

If the league were run by MPJ, the players would all have herd immunity by now. *taps temple* But on the court, MPJ is nice. Top-30 on a per game basis.

The rebounds are a nice surprise. Other than that, THJ will provide points and tres. Whether he’s on or off is anyone’s guess, much to the chagrin of Rick Carlisle.

Luka is shooting a respectable 75% from the line on the season. Not quite where it should be, but it’s enough to not outright tank his value. If this line is any indication, he may live up to his first-round ADP yet.

Got 31 minutes of run. If you give him that much playing time, he’ll usually repay you with a three, a steal, and a block.

The East will forever run through this guy. Visually-pleasing line, if not mentally-pleasing.

Vanilla Theis is heating up, folks. The Celtics have so many bigs, and yet none seem capable of running away with the lion’s share of minutes. Ugly situation overall, though Theis should still be a low-end big at the end of the day.

Double-doubled in 26 minutes of play. Added two steals and a block, too.

Top-20 on the season — the efficiency is mind-boggling, is he the early favorite for MIP?

Professional bucket-getter. The turnovers are the only blemish, as LaVine racked up 6 tonight and is averaging over 4 on the year.

Man’s still got some life in him. For the veteran minimum, he could make a contender very happy at the trade deadline.

Did a little bit of everything. Fringe top-100 player on the year.

Killing it with the defensive stats during KAT’s absence.

As long as Naz and Vanderbilt can share the floor, both can have temporary value. Naz probably has the higher baseline of the two.

Not what you want to see if you’re a Rubio owner, presumably already thinking about cutting him. Then you glance over at the assists column and think, one more week.

Beasley did his best MVP impression tonight as the Wolves fell to the Warriors.

Wiggins is now a bonafide shotblocker, and tonight he showed off his newfound abilities to his ex. What a world we live in, when Wiggy is getting chase down blocks and making hustle plays, earning the nickname two-way Wiggins. Top-80 on the year.

Steph decided to go nuclear in the 4th to seal off any hope the Wolves might have had. Don’t worry, it happens to the best of us, Minnesota.

Not quite as good as Wiggins or Curry, but Kelly put up a quality line of his own. It’s a steals kingdom out here, and we’re just living in it.

Roby is worth picking up whenever Horford misses time. The boards could use some work, but the defensive stats are there.

Is he good or not? I honestly can’t tell. Anyways, he’s probably a lukewarm hold. There’s just too much opportunity to be had.

Gorgeous line from Shai. Top-40 on the year, but that should increase as we go.

Scoring explosion out of nowhere, but it looks like he sacrificed everything else to get it. Empty stat line.

I’ll never miss an opportunity to write a Melo blurb. He’s been pretty bad for fantasy purposes, mostly due to an atrocious 39% from the field. Tonight he was firing on all cylinders, though.

Injuries are paving the way to opportunity within the Blazers, who are usually relatively deep. Enes is a walking double-double, but usually he’s light in the peripheral categories.

Pedestrian line from Dame, as the Blazers fell just shy of consecutive wins.

In McCollum and Covington’s absence, somebody has to step up. Even Rodney Hood is banged up, leaving Trent Jr. to play a game-high 41 minutes. Somehow, he was still efficient and dropped 22 on OKC.

Another beneficiary of the Blazer’s injury woes, Simons also shot the ball well. It’s a good thing the Blazers are deep in the wings.

Should I blow my #5 Waiver claim on Covington? Dropping Obi Toppin

Would you drop any of my guys for one/any of: Cole Anthony, Eric Gordon, Wayne Ellington, Jeremy Lamb, Daniel Theis?

Jeremy Lamb should be rostered. If Harris is Gary Harris, then I’d make that swap. If it’s Tobias, then I’d swap out Nunn/Quickley.

I’d also swap Theis for Nunn/Quickley since it looks like you could use some help in big man stats.

Other than that, keep an eye on Cole Anthony, who’s trending up.

Haha, it was Joe Harris. He was great up until Harden arrived. Sigh. I really wish Thib didn’t hate rookies and that he’d just start Quickley every game instead of giving him minutes every 3 games.

Gotchu. Yeah, I’d just make the switches with Nunn and Quickley then.

Man, you’re talking to a lifelong Knicks fan so I know what you mean. There is no universe where Elfrid Payton is better than IQ. Just a hierarchy thing.