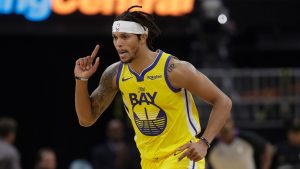 Bruce Lee was the man. No ifs, ands, or buts about it. He was an actor, director, philosopher, teacher, and professional ass-kicker. His speed and quickness would mesmerize and put me into a trance. Beep. Boop. Bop. You know what always mesmerizes? The Stocktonator. But what I most admired about him was his mind. My favorite Bruce Lee quote is, “Empty your mind, be formless, shapeless – like water. Now you put water in a cup, it becomes the cup. You put water into a bottle it becomes the bottle. You put it in a teapot it becomes the teapot. Now water can flow or it can crash.” When he first arrived to the United States, he was all about the Wing Chun style, but he realized it was too rigid for the chaos of street fighting. As a result, he developed “the style of no style” which emphasized “practicality, flexibility, speed, and efficiency.” Brother-from-another-mother, Damion Lee utilized the same techniques as he led the Warriors to a victory over the Rockets, 116-104.

Made his fifth start in a row and played 31 minutes. He was efficient from the floor, displayed speed in getting his 211 on, showed flexibility in his game by dishing out dimes, and was practically impossible to bottle up. He flowed like water through and around the Rockets. Now, Lee is a two-way player, and he has 15 days left before he’s sent down to the G-League. The Warriors cannot waive anyone to free up a spot because they are right at the hard cap. They could trade someone like Marquese Chriss, Alec Burks, or Glenn Robinson III, but that is unlikely. Translation: this will probably not last. With that said, he’s been a top 25 player over the past three games. He’s averaged 31.4 minutes, 18.7 points, 2.7 tres, 9.7 boards, 2.7 dimes, and 1.3 steals. The turnovers have been low while the percentages have been good. Like brother-from-another Bruce, the party will likely end prematurely, but there will be plenty of ass-kicking until that happens.

It was Christmas! Hope everyone had a merry one. 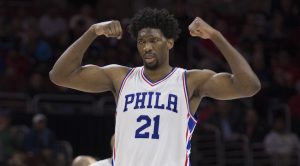 Embiid could’ve eaten more deer yesterday, but the game was a blowout until the final minutes. As a result, he only played 28 minutes. Over the past seven games, Embiid has been the #3 player for fantasy. There isn’t much else to write. He makes my job easier. I love you, Joel.

A terrible shooting performance, but his impact is understated, for both fantasy and real life. Horford can make plays on the perimeter, whether it be shooting from downtown or passing to cutters and open shooters. His defense is also good, although his defensive rating was poor yesterday. For fantasy, you’re going to get some points, tres, boards, dimes, steals, and blocks. Basically, everything. He will never win a week for you, but his across-the-board contributions have value. You will yawn during the season, but at the end of the year, top 40 production will deposited into your account.

If Ben Simmons could shoot, he’d be the greatest player of all time. No B. S. But alas, he is the antithesis. He is essentially a punt three category player (turnovers, free throw percentage, and tres). Yet, he remains a top 50-ish player because the boards, dimes, and steals are so voluminous with a side helping of points and blocks. He is the fantasy version of, “No, no, no, noooooo….YES!”

My RichardSON!!! He’s back, baby! Ok, fine, he still has a long way to go, but he’s been playing over 33 minutes the past four games and is contributing across the board. The one bugaboo is/has/probably will be is the field goal percentage.

I’ve written this a few times before, but the Bucks play defense inside/out, in that they pack the paint and allow shots from downtown. As a result, they lead the league in most tres attempts per game. Yesterday, the Sixers tied a franchise high with 21 tres. Something to keep in mind for streaming and/or DFS.

See what I mean? Korkmaz was Furkan en fuego! Now, Korkmaz is getting more run because Matisse Thybulle is out, so he’s only a short-term option if you need tres. Over the past four games, he’s averaged 19.6 minutes. Yesterday, he played 25.

The Sixers are really, really good on defense and are built to slow down G, as they have Embiid and Horford to limit Space Jam-esque dunks at the rim. With that said, G was still able to produce a full stat line. That is how freaking good he is. It also helps when he misses these….

Giannis 0-7 from 3pt. Sixers gave him wide open shots and that was smart. He has to improve on his 3 point shooting. pic.twitter.com/loeMlPx2qm

Once he gets that down, it’s game over.

Warm it up, Khris. He’s about to. With the paint packed, Middleton is ideally suited to take advantage. He’s shooting 40% from downtown and 48% overall. That means he’s converting 53% of his two-point shots. Impressive. Anyways, for fantasy Middleton is a top 40 player. He contributes in every cat except for blocks.

Played 34 minutes. I’m old enough to remember when the Warriors said that Dray would be on a 27-minute cap. Those were good times. Over the past three games, Dray has averaged 32.7 minutes of run. Don’t expect 20 points often, but the boards, dimes, and defensive stats should be plentiful.

With Kevon Looney out, WCS has been soaking up most of the center minutes for the Warriors. Over the past three games, he’s averaged 29.8 minutes. Last night, he played 31. He’s provided some points and boards, but where he’s really been delivering has been in the defensive stats; 1.3 steals and 3.3 blocks! Wowzers! As a result, top 25 for fantasy over that span. Will it continue? Probably not, but you can ride him while he’s getting all this run.

Over the past six games, Russ has averaged 37.9 minutes and 24.8 shot attempts!!! LOL. The real eye-opener, though, has been the free throw shooting; 89% on 8.2 attempts per game. There was a time three years ago when Russ was shooting over 80% from the line. Were the last two years outliers or a trend? I side with trend but who knows. Now, if he can get the turnovers down and field goal percentage up. Yeah, that’s not happening. Let’s be happy with the free throw improvement. Over the past six games, Russ has been a top 45 player for fantasy.

James did not get me too Harden excited last night. I believe Oakland was one of the cities rated with exemplary strip clubs, so James himself must’ve gotten Harden excited off the court, which translated to limpness on the court.

I’m still live with my Kawhi 2.0 take. Granted, it probably won’t happen but at least there’s been improvement in that direction. The offense has picked up, especially in the efficiency department, but it’s nice to see the improvement in dimes. The steals, while over 1 per game, are still way below the around 2 per game for Kawhi. Still, he’s only 22 years old and maybe Danny Ainge knew what he was doing when he extended Brown to a four-year, $115 million contract. For fantasy, he’s been a top 15 player over the past 13 games, primarily on the back of 55% shooting from the field. That’s going to regress, but top 40-50 production should be a reasonable expectation.

Played 18 minutes off the bench. He’s not going to get more than 20-ish minutes per game, but he’s a threat to dub-dub anytime he’s out there. With Robert Williams sidelined, the minutes should be consistent.

Played 37 minutes. Fred VanELITE had been struggling a bit since returning from injury, so last night’s game was a welcome sight. The field goal percentage is always going to be an issue, but the points, dimes, and steals should be…..class? ELITE, of course, primarily to playing a shit ton of minutes. He’s averaging 36.4 on the season and will likely finish with closer to 38 per game.

Played 28 minutes off the bench. This Boucher is no water boy. He was the AD of the G-League last season, and has been balling the F out when given run. The issue is that he’s getting more run lately due to blowouts and when Serge Ibaka doesn’t get his full playing time. The upside is tantalizing, but until he carves out a substantial role, it’s tough to trust him.

Played 30 minutes. Oh, momma! Favors has been ramped up and is ready to rock and roll. Well, technically, he’s already on a roll, so it’s time to rock. Over the past three games, he’s averaged 29.3 minutes, 10 points, 12 boards, 4 dimes, and 2 blocks. The free throw shooting is an issue, but it’s on low volume, so the impact is mitigated. Now, the biggest bugaboo for Favors has been injury, so as long as he stays healthy, he’s going to be a valuable fantasy asset. Especially since the fantasy environment in New Orleans is a juicy one.

Top 15 player on the season. Congrats to everyone who bought high. I can’t wait to see exactly what his ceiling looks like.

Got the start and played 36 minutes. The shooting efficiency is always going to be an issue, but if he’s going to start and play mid-30s in minutes, then Ball is going to be someone you want to own. The dimes, boards, and defensive stats will be there. As mentioned above, the Pelicans play at a fast pace aaaaaaaaaaaaaaaaaaaannd they will be getting Zion Williamson back into the mix.

In 31 minutes. The counting stats are all fine. What’s been on a Holiday has been the field goal percentage. He’s shooting 43% on the season and has had spurts in the high-30s. For perspective, the last three years, Holiday has shot 47%, 49%, and 45% from the field. The forecast is looking bright for the upcoming Holiday.

Played 30 minutes off the bench. Hart receives decent minutes for a reserve; between 24 and 30 per game. He can provide tres and boards. The field goal percentage usually isn’t great and he doesn’t provide much else. He will have  a ceiling game from time to time so that he enters our consciousness, but he’s tough to trust on the reg.

In 31 minutes, as the Nuggets lost their shine to the Pelicans, 100-112. He’s been the #11 player for fantasy over the past 15 games, and will likely enter the top 10 and finish there at the end of the season. We need to figure out a name for the annual Jokic early slump and panic. There’s Groundhog’s Day for Punxsutawney Phil. Any suggestions?

Played 29 minutes off the bench. Paul Millsap only played 16 minutes. The minutes have been up and down for both Grant and Millsap, but it looks like a split down the middle to me, with fluctuations from time to time. This is a situation to monitor.

In 27 minutes off the bench. Kuzma is an important player for the Lakers, as he gives them another player who can get buckets. In addition, while he isn’t the best defender, it’s not for lack of effort. As a result, the playing time should be relatively secure. From a fantasy persepective, he’s mainly a points, tres, and boards player so don’t get too giddy.

Both played 39 minutes. It’s remarkable how many similar stat lines these two have produced this season. I can’t wait for the matching 50-burgers!!! Anyways, not much needs to be said. Both are amazing players for fantasy. The shooting is inconsistent for LeBron but he’s a threat to mess around on any given night regardless. As for AD, bow down and pay homage.

Led the Clippers to another victory over the Lakers, 111-106.