Kobe Bryant is the NBA’s third all-time leading scorer with 33,643 points. He could shoot from downtown, break your ankles and flush it down your throat, and pump fake, pump fake, pivot, spin, then fade away and splash from the mid-range. Bottom line: Kobe was a professional getter of buckets. He’s often viewed as a ball hog, though. Some of it is fair. 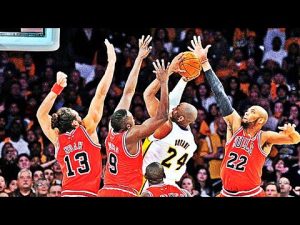 Some of it isn’t. Many of his shots came with the shot clock or game clock near zero. The ultimate argument against it, though, is the 2005 Lakers. After Lamar Odom and his 11.6 field goal attempts that season, it was Smush Parker with 9.5, Chris Mihm with 7.8, Brian Cook with 6.3, Devean George with 6, Kwame Brown with 5.4, Luke Walton with 4.8, Sasha Vujacic with 3.8, Laron Profit…..Can I stop now? Kobe against three defenders gave the Lakers a better chance than Smush Parker wide open, right? Anyways, I kind of kid, as Kobe was an all-around player who averaged close to 5 dimes per game over the course of his career. With that said, even I as a Lakers fan can consider him a ball hog. You can’t score if you don’t shoot. Anyways, Kobe didn’t play much his rookie year (15.5 minutes per game) and he only averaged 5.9 shots per game. His second year in the league, the minutes went up to 26 and the field goal attempts were at 11.6. It was the third year when he started to go bonkers, averaging 37.9 minutes and 15.6 shots per game. Coby White of the Chicago Bulls scoffs at those numbers, as he’s only averaging 24.2 minutes but jacking up 12.4 shots per game!

Can’t score if you don’t shoot, and Coby did plenty of both last night. Granted, it was against the Knicks so value must be cut in half. With that said, this is the second time scoring at least 25 points in a game. Now, on the season, the field goal percentage is at 36%, so the range of outcomes is 1 point to somewhere in the 20s. The most promising development, though, has been the playing time. White has played 27, 27, 30, 24, and 25 minutes over the past five games. Will it continue? Tough to say because Tomas Satoransky and Kris Dunn are still receiving playing time in the low 20s. This looks to be a “hot hand” situation, which sucks for fantasy. If White starts getting consistent minutes in the 30s or one of the other guards gets injured, then I’d consider him for fantasy. Until then, he’s best viewed as a streamer.

Got the start and played 26 minutes. The Taj Mahal is still open to the public. Get your tickets now before it’s gone forever! So it looks like Taj will be getting the starts at center for as long as Mitchell Robinson is out.

A nice bounceback game for R. J. after his back-to-back stinkers against Cleveland and Dallas. The trials and tribulations of a rookie. R. J. is playing a ton of minutes and the counting stats will be there, but the percentages destroy his value. He’s shooting 44% from the free throw line on 6.1 attempts!

Played 32 minutes off the bench, the first time eclipsing the 30 minute threshold all year. Is there fantasy gold in this Fort Knox? Even if he gets the minutes, he’s only a points and tres guy. Maybe he will chip in some boards as well, but the percentages are brutal to live with.

Played 35 minutes, a season high! This Carter Administration is in its infancy. As a result, there’s been a little too much foul play. When everything gets ironed out, WCJ will provide points, boards, blocks, and good percentages.

Got the start for Rodney Hood and played 33 minutes. Bazemore provides tres, boards, steals, and blocks. Unfortunately, he’s Clark Kent when it comes to the percentages.

Played 36 minutes. The Nemanja was piping hot and pungent last night. Just remember that Luke Walton is a bobo and Nemanja had received 19 and 16 minutes of run the prior two games.

Played 31 minutes. Orale, Holmes! At least the Bobo hasn’t messed this one up yet, as Holmes has played 31, 29, 31, and 30 minutes the past four games. The points have been erratic, but Holmes has been a consistent contributor in boards and blocks.

Received the start for the injured De’Aaron Fox and played 38 minutes. He’s going to get a ton of minutes. Whether he provides fantasy value is the question. Actually, he won’t. End of story.

Played 32 minutes off the bench and will likely be the biggest beneficiary of the Fox injury. BogBog is no Bobo and will deliver points, tres, dimes, and steals. Hopefully The Bobo doesn’t screw this up.

81.3% true shooting!!! Ha! The only blemishes to his game are the lack of blocks and high turnovers. Top 20 player for fantasy.

Came off the bench and played 22 minutes. This Len has been stealing my sunshine all season long, but if he continues to perform like this on a nightly basis, then everything will be all right. I just have no faith that it will happen. I’m always falling for the bananna in the tailpipe.

Played 36 minutes and has been enfuego. He’s shooting 43% from downtown, but 38% from the field on the season. Ha! With that said, he has four games with at least 9 boards and a steal in every game. He’s a top 40 player right now. That probably won’t last, as he’s finished inside the top 100 only twice in his career, but one of those years was a #52 finish.

Got the start but only played 18 minutes due to foul trouble.

Played 30 minutes due to the aforementioned foul trouble for Allen. If you need boards and blocks, DJ can spin those tunes, but don’t expect more than 22-24 minutes a night.

#6 player for fantasy right now. He’s only turning the ball over 2.6 times per game and is even blocking 0.6 shots!

Congrats to those of you who bought low.

Played 32 minutes. He’s getting the run, but doing nothing with it. 33% shooting from the field does not get anyone into the holiday spirit. Sure, that could improve, but the steals and dimes are significantly down from last year as well. Just an average Joe I’m afraid. UPDATE: I consulted our resident Jazz homer, Viz, and asked for his thoughts on Ingles. He assured us that he will be fine. There you have it, folks.

I see you, Luke!!! I’ve bashed him plenty in the past and clowned the Pistons for selecting him ahead of Donovan Mitchell and Bam Adebayo, so I have to give props when props are due. Top 60 player for fantasy, as he’s averaging 33.7 minutes, 18.9 points, 3 tres, 3.8 boards, and 4.2 dimes. He won’t contribute in the defensive cats and the usage will come down when the Pistons are healthy, but he should continue getting the minutes.

Played 26 minutes. Lake didn’t play, so I wouldn’t make too much of last night.

Got the start and played 36 minutes because Derrick Rose did not play. Not a great shooter, Brown can deliver boards, dimes, and steals. Unfortunately, only viable when he starts.

Bam is a beast on the boards and in the defensive cats. He also dishes out 4.6 dimes per game and the field goal percentage is elite. Unfortunately, the free throw shooting is a paltry 60% on 6.9 attempts. That makes me sad.

Butler is the help and the master.

Got the start and played 29 minutes due to all the injuries for the Heat. That’s now five starts for the DR and a cheap source of tres.

Got the start and played 37 minutes because Justise Winslow and Tyler Herro did not play in this one. When everyone is healthy, he won’t play Nunn, but the minutes will likely be in the low-20s.

Played 29 minutes off the bench. He’s healthy and thanked Myers Leonard for his service. Kelly O will provide mainly tres and boards.

Play of the Year in my opinion! He truly is gunning for those bags this offseason. Anyways, TT is the #31 player for fantasy!!! He’s averaging 33.5 minutes, 16.5 points, 11.4 boards, 2.3 dimes, 0.9 steals, and 1.4 blocks. The field goal percentage is an excellent 54%. Unfortunately, the free throw shooting is only 58%. Still….impressive what he’s doing. Don’t tell me contract year doesn’t do anything.

Please, Lord. Keep Embiid healthy. I want to see what the ceiling looks like.

I was told that there would be triple-doubles from Simmons. As usual, the tres are non-existent. Remember all those videos over the summer? Ha! Anyways, the free throw shooting still sucks. What the [email protected]#!. Seriously, I don’t get it. The steals are elite at 2.9 per game, but the boards and dimes are significantly lower form last season. I don’t mess around with BS.

The Thunder got zoomed out of town by the Pacers, 85-111. As a result, no starter played more than 28 minutes and a bunch of bench guys played over 20 minutes. Therefore, no stat boxes for you!!!!

Tied for fifth in dub-dubs on the season. He’s a top 20 player right now, but partly due to Myles Turner being out for a significant amount of time.

Got the start and played 31 minutes because Jeremy Lamb did not play again. The Pacers love Holiday and think he could be an important piece for the future. Unfortunately, the future is not now. Once Lamb returns, and then Oladipo makes it back, Holiday may as well be on one.

Before I get into the Lakers and Suns players, I’m super impressed by the Suns. They play good defense and the offense is impressive. There’s movement, tons of back cutting, and everyone passes well. Well, except for Saric. The acquisitions of Ricky Rubio and Aron Baynes have been magnifique.

It just ain’t fair. The most important thing regarding AD is health, and the shoulder that’s been much talked about looked fine. I did not see him wince once during the game.

Played 25 minutes off the bench. Kuuuuuuuuuuuuuuuuuuuuzzzzzzzzzz was on fire, scoring in a variety of ways. The most encouraging thing was his ability to knock down the catch-and-shoot tres. Now, his defense is a liability, so teams will attack him, which could get him run off the court. On most nights, though, he’s going to be a vital part of this team.

Played 14 minutes in his debut. As much as I front on Rondo, he’s pretty important for this Lakers squad, as he can bring the ball up and initiate the offense. None of the other guards can do that. The shooting is suspect, but he has the ability to mess around once he gets up to speed.

Bald Mamba played 25 minutes. He’s getting the run because he plays good defense, but the fantasy contributions will be minimal.

Only played 19 minutes because he flat out sucked. He was guarding LeBron when he was in the game and that seemed to take a lot of him. The shot was way off and he got called for carrying when he tried to drive. Just one of those games.

Maybe the Suns should taint Ayton’s urine sample on purpose because how can they sit Baynes when he returns? He’s so good and is a big reason why the Suns are winning games. He’s a rock on defense. On offense, he can shoot from downtown which spaces the floor, sets wicked picks, and is a very good passer. Top 40 player for fantasy.

Rubio is a top 25 player for fantasy. He’s shooting the ball confidently from downtown, rebounding, dishing out dimes, and getting his 211 on. The dimes are going to be there all season for Rubio because the Suns are moving so well without the ball. It’s a fun offense to watch and will continue being a boon for Rubio.

Played 23 minutes off the bench. Don’t fall for the bananna in the tailpipe.

Played 27 minutes off the bench. The minutes have been trending up all season. If he gets 28-30 minutes, then it’s someone you need to monitor. The stroke looks good and he has confidence launching it from anywhere. For fantasy, he won’t be much more than a tres guy, though.