JB – The glitz, the glamour, the Razzies!  Slim we’re back, for the 4th Annual Razzies, I can’t believe we’re now simulcast live on ABC, NBC, and Skinamax!

Slim – Yeah, I dunno how you sold that third one…

JB buttons it back on…

JB – …Well, simulcast on ABC and NBC then…  The cameras are out, our NBA nominees are arriving on the red carpet as we speak.  Our Razzies are backstage with THE CORRECT award cards set up by our PAs for each 16-17 Razzies, with the Razzie awarded to each esteemed winner by your votes.  There’s Chandler Parsons sporting a walking cane, I guess there’s no hope that it was all an act and he goes into a front somersault like Gene Wilder in Willy Wonka, right?!

Slim – …I’m surprised he’s not in a wheelchair…  Ohhhh, entering in the west entrance, let’s hope he can fit that hat in under the doorway!  It’s…  Coach Asshat!

JB – Nice spot Slim, yes Coach Asshat looks like a total Mess, fitting for his season, I just love this time of year!

Slim – Speaking of love, remember last year when I showed you some pictures of Gary Harris I was hoping he would see, this time I have a video!

Slim pulls out his phone [NOT an iPhone!], and starts playing a video.  There is so.  Much.  Hair!

JB – No!  NO!  Make it stop!  Well, we got Skinamax back, but lost ABC and NBC, 1 outta 3 ain’t bad!  Speaking of, there’s Andre Drummond!  Waving at the crowd, shoulder hair busting through his tuxedo.  What a illustrious night.  Slim, I think everyone has about filed away into our ballroom, Let’s award some Razzies!

Slim is disgustingly still holding his phone up to the camera.  JB just shakes his head…

The Razzies are back!  Man, JB almost gets the Razzie for “Tardiness of the Year”!  Hey, better late than never!

Hard to believe this our fourth year awarding Razzies to the worst of the worst.  Screw all the “season’s best” awards everyone else likes to give out!  That’s trash!  Fantasy is more frustrating than it is rewarding, we all know that!  Let’s take a moment to look back at some of our former winners; so in your head, sing some dramatic music while looking back at our infamous acceptance speeches from our previous seasons:

And for our nominees below, they only need your vote to get their very own awards!  We’ve got Kevin Durant looking at his second “worst injury” award, the Lakers going for back-to-back worst fantasy team wins…  They’re getting repeats like the Kobe Bryant glory years!

So we call on you – yes, you Razzball Nation – to again vote for the worst of the worst of the 2016-17 Fantasy Basketball Season, by voting on which players, teams, and coaches spurned you the hardest.  We’ll be having our Awards Ceremony (winners awards solely off of your votes) and acceptance speeches on Tuesday, so get your votes in over the weekend!  Vote once!  Vote often!  Have your voice be heard, and let’s award some Razzies! 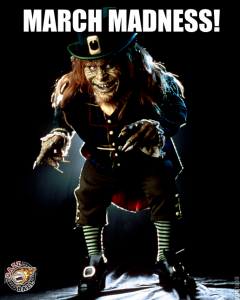 Most were busted, but some were bested, it’s time to announce our Razzball Basketball Bracket Pool winner!  All hail Anthony and his “Is this real?” bracket!  At least I’m assuming it’s a he…  I don’t think Casey Anthony is doing Razzball Bracket Challenges!  With 142 points, they crushed the bracket, getting 12 of the sweet 16 teams, including all 8 from the right side of the bracket.  Then as several did, had the final game correct, and “bah bah bah bah, bum bum bum, bah bah bah…!” [Chapel hill fight song] of course got the Tar Heels right winning it all.  So did I!  But my bracket was pure Scheiße otherwise, still got 6th out of our 57 entries though!

Congrats to Anthony, and to claim your $50 Amazon Gift Card, shoot me a dime – [email protected]  Thanks to everyone for playing in the Bracket Challenge this year, and let’s keep growing our Razzball Pool for years to come!

The tournament is back, let’s get some-a-dat mad-ness!

It’s the best time of year to hope to get lucky when randomly picking names (like Santa!), and join the 5th annual Razzball Basketball Bracket Pool, which through the power of hyperlinks, can be joined by clicking it right there.  Damn, after finishing 2nd outta 27 in 2015, I got only 13th outta 37 last year.  I’m ready to win it this year, dammit!  My alma mater, UNCW, going all the way!  But goddamn, why we gotta play an ACC team outta the gate again?!  Stupid Virginia…  At least we got a higher seed!

The prize this year is going to be pretty epic!  Yup, if you get a perfect bracket in our pool, I’ll pay you $1 fiftillion dollars!  Hah, I keed of course; while Razzball is da shiznit, I’m not exactly Warren Buffet out here!  We’re going to award the winner a $50 Amazon Gift Card, just for besting us schmohawks in the Razzball Pool.  The pool is private this year since I don’t want any internet trawlers (trawlers?  trollers?), so the password to join is “razzball”.  I know right, tough to crack that code!  I employed a Navajo Windtalker just to make it!  So join in the Madness, make a bracket, vie for the free price, and cheer for those Cinderellas!

Join the pool and set up your bracket today!

(Razzball Basketball Pool – redundancy is the key to human life!) 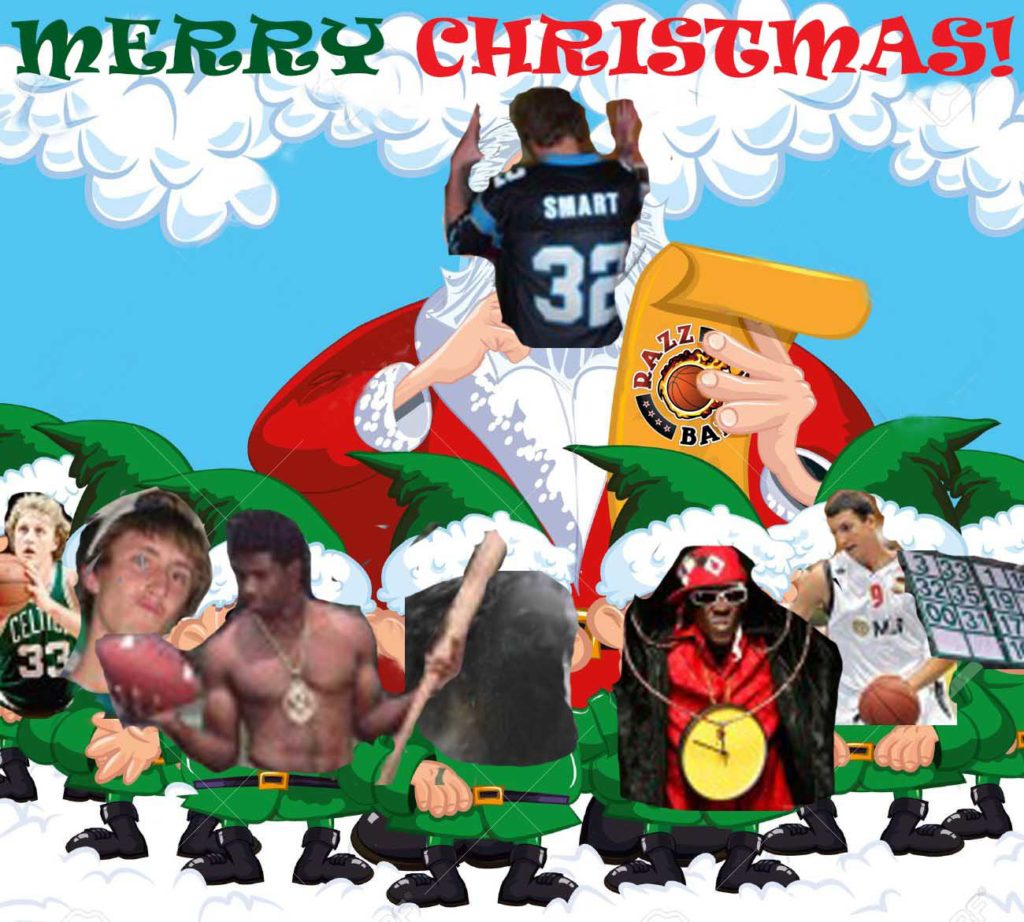 Merry Christmas! Thanks to everyone for making Razzball Basketball what it is today with your comments, readership, and most importantly – immense knowledge of fantasy hoops! I learn as much from your comments as I do from anything else. So curl up around the fireplace and watch NBA all day, because nothing is more fantasy sports-ish than ignoring your family because it’s a pivotal Sunday slate of games in H2H leagues! And of course, special thanks to our staff who make the Razzballs spin round and round.

Happy Holidays to you and your families, from all of us at Razzball Nation! 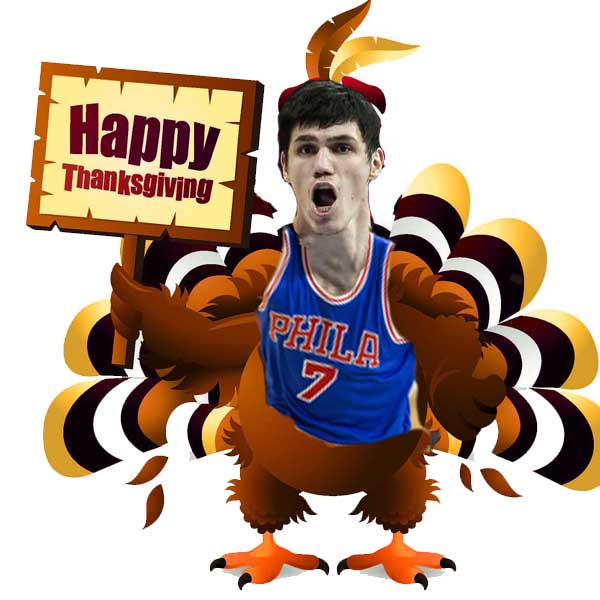 Happy Thanksgiving from all of us at Razzball Nation! Enjoy a day off from hoops, and we’ll catch you with the Daily Notes next Monday!

JB – The 3rd Annual Razzies are here! With the growing success from the 2013-14 Razzies and the 2014-15 Razzies, all of Hollywood is here for the event, traffic is blocked off in all directions, this is the ONLY place to be if you’re any sort of famous, isn’t that right Slim?!

JB – Oh OK, just because you’re a national treasure in Australia and all I do is run this fubar Razzball Basketball outfit it makes you more famous than me?!

Slim just subtly shakes his head, with just enough of a menacing look…

JB – Anyyyyyyyyyyyway, all of the NBA world is here tonight, because even though the season is still going on, no one important is still playing isn’t that right Slim?!

Slim – Warriors are still rollin’ em out there!

Slim – Dammit, are you gonna do this EVERY friggin’ time at these things?!

[Reposting to the top as polls close tonight! Be sure and submit your votes, and if you’ve already voted – hell, submit em one more time, two more times, a million more times while voting is up! Let’s win us some Razzies!]

The 3rd Annual Razzies are upon us! The 2013-14 Razzies and the 2014-15 Razzies were such big successes that we’re in negotiations with TNT for broadcast rights to the 4th Annual Razzies next year. It’s a flat out bidding war!

Sometimes our only outlet to absolutely-crushing injuries and inept misery in fantasy basketball is to look forward to an award ceremony celebrating the worst of the worst. The scrubbiest of the scrubs. The schlubbiest of the schlubs. This has quickly started to sound like a Yiddish vocal exercise. You know what they say – the Jews run Hollywood! Where’s Slim’s pronunciation of C.J. McCollum when you need it!

Our decorated panel has painstakingly put together their nominations for our Razzie categories below, and we went out and interviewed every last one of the nominees for their reactions. Hey, if we can interview Nick Van Exel, we can do anything! We rely on YOU Razzball Nation, to vote for each of the categories to lay claim to the most frustrating players/coaches/teams of 2015-16. Polls will be open until Tuesday night (April 4), so vent your catharsis into the voting booth, which we all know you’re going to have to do for the Presidential election later this year… There’s another worst of the worst! So vote once, vote several times, vote as much as you’d like, and let’s get pumped to hand out some Razzies next Thursday morning!

The tournament is finally here!

It’s time to make our NCAA Tourney Bracket picks and join the 4th annual Razzball Basketball Bracket Pool, which through the power of hyperlinks, can be joined by clicking it right there! Yours truly put together a 2nd out of 27 finish in last year’s Razzball Bracket, so take that everyone that probably follows college basketball more than me! Hah, I keed, I’ve been pretty invested this season with Chapel Hill looking so good. And look at my alma mater making it! UNCW getting a ridiculous draw playing same-state opponent Duke in a 4 vs. 13 matchup… Duke seems to choke when they’re not a #1 seed though, Gus Ayonin’! Although I dunno, I went to a UNCW game this year and watched a handful of their other games… It’s gonna be near impossible for them to keep up unless Duke misses all their 3s, since that’s all Duke can ever do on a basketball court…

So come one, come all, and the winner of the pool will get a spot in the Commenters REL League plus lots of notoriety on the Pod. Phrases like “___ is so much smarter than us!” and “____ will pick my lotto numbers next time!” How is that not the coolest prize ever, Hurley?!

Join the pool and set up your bracket today!

You’ve drafted your team or about to draft this weekend, the season is upon you, and you’re still stuck with “Joe’s Team” as your team name.  IT ELICITS NO FEAR OR HUMOR!  Like a really, REALLY bad horror film…  Like Secret Window.   “You stole my story.”  You stole two hours of my life!

But alas, your solution is nigh!  Our brand new FANTASY BASKETBALL TEAM NAME GENERATOR is hot off the presses (Well, hot off the keyboard…?  Newspapers need a new one for that!) and ready to make your hoops season memorable!  It’s also linked to the menu under “Our Leagues” for your sudden 3:00 AM urge to make new fantasy team names.  “Ahhhhh, Matt Barnes’ Ex isn’t good enough!”

Just pick an Adjective (with a few possessive noun categories in there), then a noun, and ba-boom!  You’ve got a new team name!  Be sure to shoot your favorite team names in the comments, and let’s get pumped for the season next week, Razzball Nation!