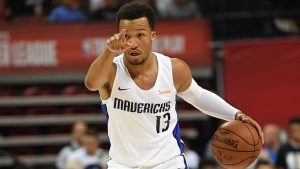 The Dallas Mavericks are powered by two nuclear reactors. Unfortunately, the Luka Doncic Reactor was damaged a week ago and needed to be shut down. The Kristaps Porzingis Reactor has been throttled up in the meantime, but more power was required. Mark Cuban was wise to have alternative power sources at the ready. Bunsen burners don’t provide a ton of heat and are primarily just used in laboratories, but they provide a continuous source of fire. That is exactly what Jalen Brunson provides. Yesterday, the dial was turned up to full max:

In 34 minutes. Now, the Doncic Reactor’s repairs are almost finished, so the Brunson Burner will be relegated once again to just laboratory experiments, but he’s someone to keep in mind if injury strikes again. In seven games as a starter this season, Brunson has averaged 29.8 minutes, 12.4 points, 1.4 tres, 4.3 boards, and 6.9 dimes. The shooting efficiency has also been excellent; 46% from the field and 100% from the line. In 22 games off the bench, he averages a meager 14.7 minutes. The Brunson Burner will never be able to fully power the Mavs on a consistent basis, but he’s more than capable of providing fire when called upon. Beep. Boop. Bop. You know what always brings the heat? The Stocktonator.

Continues to start and played 30 minutes. I was high on Powell coming into the season, as he provides a little something something in every category. I didn’t expect him to average only 25.8 minutes per game, though. I had him down for 28+. As a result, he’s been underwhelming lately, but yesterday’s game showed what he’s capable of.

Let’s just hope the Porzingis Reactor doesn’t have a Fukushima ending. If Carlisle can figure out how to best meld the powers of the Doncic and Porzingis Reators, then the Mavs are going to have clean, powerful energy for a long time.

Continues to start and played 35 minutes. Dealer, all the Hardaway bets please! He’s going to crap out more often than not, but THJ will provide enough points to make you keep rolling the dice. On the season, he’s averaging 13.6 points, 2.6 tres, and 40% shooting from the field.

Aaaaaaaaaaaaaaaallllllllmmmmmmmoooooooooosssssssttttttt messed around. This post has all been about viable energy sources. Well, with all the injuries to the Raptors, Lowry has been….Anyone remember the Val Kilmer/Elisabeth Shue movie, The Saint? Cold fusion? Well, that’s been Lowry recently. He played 42 minutes and led the Raptors to a 110-107 victory over the Mavs, after being down 23 points in the fourth quarter!!! Only one other starter scored in double figures. Over the past four games, Lowry has averaged 39.6 minutes per game!!!

In 24 minutes off the bench. The AD of the G-League last season, Boucher has oogles of potential. He’s super skinny, though, and will surprisingly be turning 27 years old in a month. As long as Marc Gasol is out, Boucher should see consistent minutes in the low-to-mid 20s.

Played 29 minutes off the bench. Rondae will also see significant run for as long as Gasol is out. He strictly works down low, so don’t expect tres, but points and boards should be plentiful.

Bismack Biyombo Boards and Blocks. Since it’s the holiday season, Biyombo felt generous and dished out a few dimes.

Graham cracker is who we all thought Terry Rozier would be. Plenty of points, tres, and dimes. He will also provide some boards and steals. Unfortunately, the field goal percentage is 38% on the season, and there are spurts when it dips below the 30s. Sounds like the weather in Chicago. Anyways, as a result, he’s only a top 75 player.

Has started the last few games and played 22 minutes yesterday. Remember how I was doing the Showcase Showdown for Marvin Williams? Well, every Showcase Showdown has two showcases on the Price is Right. The Hornets have revealed what’s behind curtain number two. Will any teams bid on either?

A career-high in both points and field goal attempts!!! Over the past three games, Tatum has been a top 10 player. The usage rate has been 33.8 and he’s been shooting 50% from the field. On the season, he’s at 41%, so expect some regression. With that said, he’s been contributing in every cat and the turnovers are low.

Played 22 minutes off the bench. With all the injuries, Williams has received 25.4 minutes and been a top 85 player, contributing points, tres, boards, and some defensive stats. He’s been shooting 71% from the field, so…..Oh, hi regression fairies.

In 24 minutes off the bench. Kanter has also benefitted from extra run due to injuries. He’s usually a dub-dub machine, but the shooting has been poor recently. If you need boards, though, Kanter can be of service.

Tied for second in the league with 24 dub-dubs, three behind Giannis’s 27. Sabonis is fifth in the league with 13.2 boards per game. Translation: Sabonis has been a freaking beast this season. For fantasy, he’s a top 50 player because he doesn’t provide tres or many defensive stats.

Got the start and played 32 minutes because Jeremy Lamb was out. Holiday can provide points, tres, dimes, and steals while he starts. As a bench player, he only averages 17.5 minutes of run.

In 31 minutes. Squinting at his season-long stat line, looking for anything that isn’t freaking amazing. Let’s see, 31 points, 12.9 boards, and 5.6 dimes!

The only bugaboo is the 59% free throw shooting. When he figures that out….

He was underwhelming to begin the season, but Lopez has picked it up of late. Over the past four games, he’s been a top 35 player, on the back of 3 blocks per game. The main issue with Brook’s season has been the shooting efficiency. On the season, the field goal percentage has been 39%. The past few seasons, he’s been a 45% shooter. That should normalize.

Hill played 22 minutes off the bench, while DiVincenzo got the start and played 25 minutes. This should be the split for as long as Eric Bledsoe is out.

Got the start because Kawhi Leonard did not play, but only played 18 minutes. Usually, I’d just say he’s doo doo, but in this case, I’m going with the PP.

Got the start and played 36 minutes because Patrick Beverley did not play. Sweet! We know who Lou is, a scoring microwave off the bench. His numbers are down this season because, when healthy, the Clippers have two superstars. The usage rate is down from 34 to 28 this season. As a reserve, Lou is scoring 18.3 points per game. As a starter, that number jumps to 27.8.

In 31 minutes off the bench. Shamet is primarily a tres specialist, so it was nice to see contributions in the other cats. That is not something to expect on a nightly basis, though.

Got the start and played 25 minutes because Danilo Gallinari was a late scratch. Bazley is mainly a boards and steals guy who can also contribute some tres.

I was ready to recycle Adams earlier in the season with all of his cousins named Sam. Good thing I didn’t because Steven has been en fuego. Over the past 15 games, he’s been a top 45 player for fantasy. He’s been averaging a dub-dub with dimes, blocks, and excellent field goal percentage. The dimes are the biggest surprise, as he’s at 2.8 this season. He had never come close to averaging 2 in any season.

REVENGE!!! This is the Shai that I know and love…and expect to be for fantasy. He’s still young, though, and there will be rough patches, but he’s going to be a star. Over the past four games, he’s been a top 45 player. To infinity and beyond!

In 33 minutes off the bench. Over the past seven games, Dennis has been a top 50 player for fantasy. He’s been a menace to those who keep fading him. Points, tres, boards, dimes, and good percentages are what he’s been providing. I’m not sure the shooting efficiency remains high, though. He’s usually a 43%-ish shooter from the field. On the season, he’s at 46% and, over the most recent heater, he’s been shooting a blistering 50%.

When Barton is healthy, he’s a very good fantasy asset, as he contributes a little something something across the board. Due to his defensive versatility, the coaching staff loves him and the minutes floor is high. So far this season, he’s a top 60 player for fantasy. A little quirk in his fantasy resume. Here’s how he finished the past five years: 211th, 52nd, 117th, 83rd, and 252nd. All due to health. Here’s the games played over that span: 43, 81, 60, 82, and 58. So he’s an auto fade for next year, right? Isn’t that how things work?

Only played 27 minutes because the Nuggets destroyed the Lakers, 128-104.

Played 34 minutes, but the big news here is that AD landed awkwardly on a wet spot and was on the bench for a period of time. It was his right knee, so this is something to monitor going forward. If he misses any time, then Kyle Kuzma should see an increased role, with both JaVale McGee and Dwight Howard getting a few more minutes.

In 22 minutes off the bench. Kuzma was the only other Laker to score in double figures. LeBron James did not play last night.

Bradley got the start, with KCP coming off the bench. The minutes favored KCP, though, 25 to 21. With Bradley now healthy, both will neuter any value for fantasy.