Top 100 player that contributes a little something something across the board. Not sexy, but neither is your front door. Both are functional and do what they are supposed to do.

Got the start at small forward and played 24 minutes. Scored 19 points and grabbed 8 boards last night. A microcosm of his career.

Played 26 minutes. In a deep league, he’s worth a look. Will get low-20s in minutes and hoist up shots when he’s in the game.

All the writers at Razzball have been telling you to pick him up. Did you listen?

A big man that can shoot from downtown and grab a few boards. Has played 27 and 28 minutes the past two games.

Played 24 minutes. Just thought you guys would like to know.

Got the start at power forward and played 29 minutes. Has now played 29, 31, and 28 minutes the past three games. Need boards? KA-POWell’s your man.

I’m sad. And sick. Let me just get through this. It’s ok, boo. Tomorrow’s a new day.

Matthews is Aminu with a new operating system.

Played 34 minutes. The Rooster is back! Until he’s not.

Played 35 minutes. Doing just fine in his new environment. Remember that video I posted from my favorite movie at top? Well, Harris gets to experience the complete opposite.

A good possibility that he gets traded. The Cavs reportedley offered JR Smith, Tristan Thompson, and their first-round draft pick for Jordan. His contract situation could be a detriment to a trade, though, as DJ is a free agent after the conclusion of the season. Many teams may not want a rental. Anyways, wherever he lands, he should continue to do what DJ do.

Played 29 minutes. A tough shooting night, but he’s had trouble with Thaddeus Young in the past. With John Wall out, Morris should continue getting usage. The optimistic development has been his use at the 5 when the Wizards go small.

The usage bump is great with Wall out. I’ve mentioned in the past that Beal is probably better with Wall on the court, though, as he can utilize screens and shoot spot ups. With that said, he always has the potential to drop a 50-burger on any given night.

Played 32 minutes. He’s getting the run, but the usage rate is below 20%. I still believe in him going forward. Does a little of everything which is nice.

Played 37 minutes. A 3 & D player without the D. Not the end of the world for fantasy owners, but for women? Would be problematic, unless they are lesbians.

Got the start because Oladipo was out. I love Lance, but won’t be fantasy relevent unless there’s an injury. 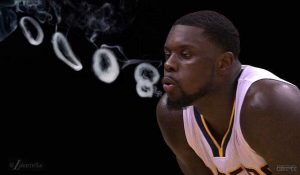 Played 27 minutes. Obviously, much better when the Odometer sits, but he still gets upper-20s run. Arvydas nods approvingly, “Dah, dah.”

With Darren Collison out for a few weeks due to knee surgery, Corey Joseph (7 points, 2 boards, 4 assists) got the start, but Young is the guy you want. He’s the more skilled offensive player and got 28 minutes of run compared to the 36 for CJ.

Got the start with Aaron Gordon out and played 32 minutes.

The point guard shituation for the Magic. Elfrid Payton played 25 minutes, Shelvin Mack played 27 minutes, and DJ Augustine played 23 minutes. Your guess is as good as mine.

Played 23 minutes but did not play in the fourth quarter again! You know why?

The stuff I saw from him during the Summer League had me like, <insert mouth dropping gif>. Euro stepping defenders and clowning guys in the open court. The Heat are trying to trade Hassan and Bam is a big reason why.

Kelly Olynyk left last night’s game after seven minutes due to a shoulder strain. His status going forward has yet to be determined. Bam is going to get more run, but Jordan Mickey could snatch a few more minutes.

Played 32 minutes. Limited upside so long as Dragic and JRich are healthy, but he gets minutes and usage.

Played 29 minutes. Still getting minutes and shot attempts, but the dynamics are much different now.

Played 28 minutes. Can really help a team that needs a big. Curious to see where he lands. Being an UFA after this season could cause some issues similar to DeAndre Jordan’s situation, but I don’t see it being too big of an impediment.

Played 30 minutes. Top 100 player for fantasy. Will drain the 3, not turn the ball over, and chip in a little across the board.

Played only 19 minutes, as he was still ill.

Over the last week, Rubio is the number 4 player in fantasy. We should’ve known when he entered the season looking like a freaking White Walker. Well, winter has come and Rubio is not taking any prisoners.

The team loves Rolls Royce. The last three games? 20, 32, and 27 minutes. Is aggressive attacking the basket, can shoot from downtown, and get his 211 on. Looks to have carved out a nice little niche for himself.

Has such a lovely stroke and, at 6′ 8″,  can literally shoot over most defenders. Always a threat to drop 30. As with anything pertaining to the Hood, danger always lurks right around the corner.

Alec Burks was a DNP-CD. Waiting on deck for when Hood gets injured.

With Cousins out, Holiday should get a ton of usage.

Played 19 minutes. The Pelicans got blown up 109-133, so I wouldn’t look too deep into this performance.

Streak of double-dubs is ended at 12 games.

Played 21 minutes. Am I writing about MKG here? I guess it really wouldn’t matter because the words of ineptness would be applicable for both.

No freaking Jokic this guy is. Till death do us part. I think the Stocktonator has the same idea because it had loved Jokic last night.

Jamal Murray and Will Barton both scored 18 points. So cute. Barton did dish out 8 dimes, while Murray dished out 7.

Harris is a machine. Borderline top 25 player for fantasy.

Got the start at power forward and played 32 minutes. Markkanen did not play in this game, but is expected back for the next one. The minutes should creep back down to the mid-20s. Portis can still deliver, though, because he packs a big punch.

Played 31 minutes, which is back-to-back games at that number. I’m wrong on many things, but I really missed it with LaVine. Didn’t think he’d come close to playing 30 minutes. Dude is a monster if he can stay healthy.

Played 32 minutes. Will be irrelevant when Markkanen returns, but keep him in mind if players go down in the future.

Has the accuracy of a SCUD missle most of the time, but every once in a while will hit his target. If you launch 100 missles, I’d hope that at least one would hit it’s target. A pure minutes/volume play.

Only played 17 minutes, as he was hampered by foul trouble all night long. Sing it Lionel.

De’Aaron Fox left the game due to a sprained ankle. X-rays were negative. If Fox were to miss any time, then George Hill gets a boost.

Played 31 minutes. A fine night for the Bogdanovic’s! Did some Eastern European entities deposit some Bitcoin into the Matrix before the games last night?

Played 21 minutes. Vlade is in the lead for his bet with Vivek, right?