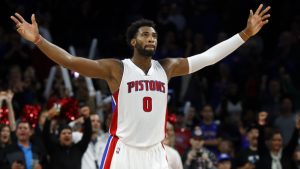 Ok, maybe it’s not a perfect fit but the Pistons and SVG could apologize to Ms. Jackson for only giving him 28 minutes of run.

What is SVG’s infatuation with Johnson? Uh…..nevermind.  He’s still only 21 years old and SVG is going to keep running him out there, so I’d keep an eye on him if he does start heating up. Until then, stop thinking about Johnson!

Smart has been on an absolute tear the last two games: 15-of-21 from the field and 7-of-11 from downtown. If you think that continues, then you are not so Smart.

The Kings won! The Kings beat the Golden State Warriors! “Vlade, I told you man. It’s all coming together!” “Vivek, the Warriors played their JV team and sat Steph Curry and Kevin Durant.” “F U, Vlade. F U.”

Willie got 29 minutes of run. Why doesn’t he play 30 minutes every night?

I still have no idea what the Kings are trying to accomplish, but Hill is getting minutes and he’s scored in double-digits in seven of the past eight games.

I’d say it’s only a matter of time, but I’m not sure a plan has been hatched. In this case, ignorance is not bliss.

Mason has received at least 20 minutes in five of the past six games and scored in double figures in four of them. I think there’s a big board on the wall in Vivek’s executive bathroom. After he wipes his ass, he throws the tissue onto the board. Wherever it lands, that’s who gets playing time for the night.

So, let’s assess that DeMarcus Cousins trade. Buddy Hield, Tyreke Evans, Langston Galloway, and two draft picks that were turned into De’Aaron Fox and Justin Jackson. Hield can’t get more than 15 minutes a game. Galloway is in Detroit, Tyreke is ballin’ the F out in Memphis, Fox can’t supplant Over the Hill, and Jackson DNP-Coach’s decision. Good times. Remember triangle paper football? That’s how I imagine the Kings selecting their draft picks.

Vince Carter – He got 18 minutes of run. That’s pretty much all you need to know regarding the Kings.

Got the start in place of Kevin Durant. This was a “REVENGE” game, but I think Casspi was too overwhelmed with emotion that he doesn’t have to play for the Kings anymore.

Got the start for Steph Curry and impressed. The team loves him and he’s only 22 years old. He won’t have much value this year, unless there’s a rest day or injury, but I could see him being the heir apparent to Klay Thompson in two years. There’s no way the Warriors will be able to afford Klay.

I remember when Iguodala was a star in Philly. Man, that’s why Jerry West is the ultimate Jedi Master. He got Iggy to come to Golden State and become one of the best role players in the league. You know exactly what you’re getting from Iggy, so if you need anything more than a pulse, then….

Only played six minutes. He only has value if Draymond Green is out.

Green and Klay are both really good players, but they can’t create offense on their own like Curry and KD. Respect the greatest of Steph and KD.

Nerlens Noel – DNP. I hope that’s the last time I have to mention him.

He never plays a ton of minutes, but he’s super productive during that time. As I’ve mentioned before, I have more confidence in him than I have in myself.

I seriously had no idea he was still in the league. The answer is no.

He’s baaaaaack. From the little I saw of him, he looked pretty good. I’d imagine that the Spurs will be super careful with him, so he probably won’t be fantasy relevant. What he does do is what he does best: be a homewrecker. He nukes the value of Patty Mills and Dejounte Murray.

Gasol played a season-high 35 minutes! Whoa, definitely an outlier but Gasol has still been a valuable asset with 25 minutes a game. Stocktonator would concur, as it liked Gasol yesterday.

With Allen Crabbe ruled out, Harris received another start. Shoutout to the NYS Laborers Union.

So, is Dinwiddie the Waiver Pick Up of the Year? Or is it Tyreke?

Benefitting from the Crabbe injury. Should slide back down the depth chart when Crabbe returns. Same goes for Isaiah Whitehead and Sean Kilpatrick, both of whom played 28 minutes.

Allen played 19 minutes. Why is Timofey Mozgov still getting 19 minutes of run? I don’t know what’s more impressive? Mozgov being owed around $48 million and playing 19 minutes or Allen not even hoisting up a shot.

The production and minutes were awesome for fantasy, but these are the situations D’Antoni should be using to, not only give his bench more run, but give Harden some rest.

The important number is 31 minutes. That’s back-to-back games with 31 minutes. Interestingly, CP3 shot under .175 in both contests. Things that make you go hmmmmm. Should State Farm be on alert?

Remember when Gordon was taking the league by storm? Yeah, me neither.

Vonleh received the start again. In four of the past five games, he’s grabbed double-digit rebounds. Aminu should be returning soon, so don’t go goo goo over Vonleh.

You know what time it is:

Received the start again and played 26 minutes after getting 37 minutes the prior game. Connaughton can shoot, so if he keeps starting and getting minutes, he’s someone to consider.

Holy shitballs. That’s three games in a row Willy has received over 15 minutes of run. Either Jeff Hornacek’s daughter begged her father to give Willy run, Jeff is over the whole ordeal, or Marketing is revving up the “Free Willy” campaign that they kept up their sleeve if the losses started to pile up for the Knicks.

A poor shooting display, but the 11 shot attempts were a good sign. As Shea Serrano says, “Shoot your shot!” Seriously, why is Jarrett Jack getting 21 minutes of run, while the Frenchise gets 20 a game? It’s only a matter of time.

The binary code. Marketing is pulling out all the stops. They probably told Noah to tell all his friends and family in all the Burroughs that he was playing last night.

LeBron ain’t here for any bullshit.

Green has all the talent in the world but just hasn’t been able to put it all together. Don’t fall for the bananna in the tailpipe.

Wade still has it, but only in spurts. Spot-start special.

Jose Calderon played 23 minutes. Let that sink in for a minute. And the Cavs won 113-91 over the Sixers. Let’s scrap the Republic and just freaking crown LeBron the King and call it a day.

Just one of those days. If you’ve never had one of them, you’re a lying POS.

33 minutes is what we want to see. The bagels in the assist, steal, and block columns are very rare. Just one of those days.

Even with Simmons starting, McConnell got 28 minutes of run. We saw last night what he can do if he starts. He’s a nice asset to have on the squad.

Got the start at small forward. Even though the Magic lost again, Simmons has a good chance to hold onto the starting role. There is the possibility that McMillan may want him balling out on the second unit. Keep an eye on how things play out.

Fournier got out of the gates white hot, but has come back down recently. I’m a believer in his talent and skill, so the recent struggles are but a blip on the radar for me.

He can shoot and gets minutes. What else do you want? Stocktonator liked him yesterday.

His name ends in son. How could I not like him? Lance is volatile, so he can crap out or put a smile on your face. He probably won’t get more than 25 minutes, unless an injury happens. With that said, he has the potential to fill up the stat sheet.

Nance returned from injury and played 30 minutes. He did start at power forward, moving Kuzma to the bench. Pick up Nance if he’s still available.

16 minutes of run. No bueno. Lakers have a crowded front court and Lopez could be the odd man out. We shall see how it all plays out.

Wow. KCP led the way for the Lakers and played 37 minutes. I love KFC, KCP, PCP…kidding about the last one.

It’s going to be an adjustment period for the Lakers now. Clarkson takes up so much usage on the second unit, that it inhibits Kuzma. The return of Nance really jumbles things up as well. I’d like to see Nance at the 5 and Kuzma at the 4, with Julius being the swing man. Keep an eye on how the minutes get distributed going forward.

I saw a funny thing on Twitter last week: Zo is the perfect player for a punt FG%, FT%, blocks, steals, assists, rebounds, and points team. I still believe, but that was pretty funny.

Wesley reminded us that he’s Wesley.

40-burger alert! So, so sweet. I miss you, Lou. You know who freaking knew? Stocktonator knew. It had Lou ranked 12th overall.