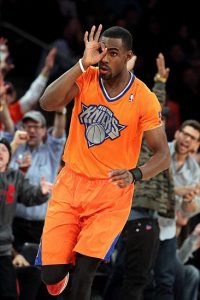 I love rolling them dice in Vegas. There is no better game than craps……when there’s a hot shooter. Everyone is laughing, shouting, high-fiving, and having an awesome time. If you’re the hot shooter, then you are freaking Nick Papagiorgio! The ladies wanna sleep with you and the men? They wanna sleep with you too. Unfortunately, there’s a reason why Vegas is adorned with bling and has lights shining from corner to corner. 7 out!!!! But it’s okay, because the memory of those hot runs are seared into our memories, which keeps us returning back to the tables, time and time again. Well, that is the Tim Hardaway Jr. experience. He shoots. He mostly craps out, but every once in a while, he will get hot, which keeps us coming back for more and more. Beep. Boop. Bop. You know what never craps out and is always hot? The Stocktonator. Last night, he was even hitting the Hardaway 6 bets…over and over again.

On the season, THJ is a top 150 player, as he’s shooting 43% from the field and doesn’t contribute much outside of points and tres. Buuuuuuuuuuuuut…….he gets hot from time to time and keeps shooting…then making…then shooting….then making….then shooting….then making. There’s high-fiving, laughing, screams of joy, and overall adoration. Just remember that the good times never last. As long as you know that he will crap out soon, and probably more often than you want to believe, then you will be fine.

In 16 minutes off the bench. He lives! If you need dimes and steals, Teague could be a fringe option, especially since Atlanta plays at a fast pace. With that said, you just don’t know how many minutes he will get on a nightly basis. It could be as low as 11 and as high as 26. Do you like to live dangerously?

The tres and boards are the only consistent things you can expect from Gordon. He has upside, as shown by last night’s game, and also from the countless blurbs mentioning that he’s an athletic marvel who has skills and is still young enough that we should give him time. Buuuuuuuuut, he will score 7 points one night then 26 the next. He’s barely a top 200 player because he doesn’t provide the D and shoots poorly from both the field and line. He’s scored over 20 points just nine times on the season.

Aaaaaaaaaaaaaaaaaalmost messed around. Vuc is currently a top 25 player. He needs to up the steals and blocks game if he wants to return to the 1/1/1 club. If not, then he gets the hand. Last season, Vuc ended as the #11 player for fantasy, primarly on the back of 51% shooting from the field. So far this season, he’s shooting 45%.

In 31 minutes off the bench. Whenever I enter Ross, I head straight for the 3-and-D aisle. I usually find a ton of good stuff and walk out satisfied. With that said, I always realize it’s Ross, a discount store, so as long as my expectations are realistic, I will remain sane.

The shooting efficiency is a real problem. So is the lack of defensive stats, which keep him out of the top 100, but points, tres, and dimes are voluminous, especially when Kyrie is contemplating the meaning of life.

In 28 minutes off the bench. There was a time when I thought I was hot shit and wanted the ball to break down whoever was naive enough to guard me. Then I got old. And fat. My dads J was pure, and he’s still able to run in his 70s because of it. I was more of a slasher, so age was not kind to my game, although I did develop a decent post game. Anyways, I became the set-the-pick,  box out, and make-the-extra-pass guy. I became self aware enough to stay in my lane. That is why I respect DJ so much.

His fourth time messing around in his career! And they’ve all come this season! Remember when I’d joke about Arvydas and Domantas changing bodies? Well, I’m beginning to think that is not a joke anymore. Despite the trip-dubs, he’s only a top 50-60 because he doesn’t provide tres or defensive stats.

Got the start and played 27 minutes. He is slowly getting ramped up and could get to 30 minutes sooner than later. I’m still cautious on Oladipo and wouldn’t want anything to do with him until next year.

Continues to start and played 34 minutes. The Nemanja has been mixed in with schwag lately, but more often than not the Nemanja has been potent. Over the last 14 games, he’s been a top 30 player, providing 14.3 points, 2.6 tres, 6.3 boards, 3.7 dimes, 1 steal, and 0.6 blocks. The percentages have been fantastic as well. Now, he’s getting a ton of run due to all the injuries. When the team gets healthy, his production should come down.

Giannis Antetokounmpo did not play due to personal reasons. When he’s off the court, Middleton and Bledsoe both garner usage rates of 33.4%, an increase of 7.7 and 9.3 respectively.

Fans in China were going bonkers over this stat line. 8 is the luckiest number in Chinese culture because it sounds like the word for wealth, fortune, and prosperity.

I’ve rarely written up Lopez this season. He must be having a shitty year. Looks at stats. Top 50 on the season. Damn. Prettay, prettay good. It’s the 2.6 blocks per game that do it. That is good for second in all the basketball land behind Hassan’s 3.1. Too bad this seven-footer made a business decision long ago to exchange boards for tres. He grabs only 4.5 boards per game and drains 1.4 tres. That Standford education at work.

Yawn. This is the nightly line. I feel like I’m watching Groundhog’s Day.

In 31 minutes off the bench. I have a sneaky suspicion that he likes Utah. Over the past four games, Clarkson has been a top 45 player, averaging 21 points, 2.5 tres, 3.5 boards, and 3 dimes. He’s been shooting 60% from the field. Lol, yeah, there’s going to be some serious regression, as he’s more like a 45% shooter. The dimes have been the biggest eye-opener, and it could be a real thing, as the Jazz system is conducive for moving the ball.

LMA with the O!!! He had been struggling, especially from an efficiency standpoint, but you know what you’re getting from LMA. And it’s serious business, no laughing matter. Top 25 on the season.

Got the start and played 27 minutes because DeMar DeRozan did not play due to back spasms.

Oh, Nikola. You so fine, you so fine you blow my mind. Oh, Nikola! I wonder if this is what prime Arvydas Sabonis looked like.

He’s healthy and back providing the business. Top 35 player over the past four games. Points, tres, and dimes are what he provides. He’s been shooting 58% from the field, but he’s more like a 45% shooter, so expect regression to hit. In addition, the usage rate has been over 31 during the heater. He was garnering a 25 usage rate for most of the season. With that said, it’s good to have him back at full speed and it’s crazy to think that he’s still only 23 years old.

In 19 minutes off the bench. It’s been two games since Millsap returned from his month-long hiatus. He’s played 18 and 19 minutes in those two games, but been highly productive in both. Millsap contributes across the board. The only issue is the health.

Will Barton did not play due to right knee inflammation.

Meow. Top 5 player on the season for fantasy. I always want to see more dog in him, but I guess it’s unfair to expect that from KAT.

Russell is going to jack up shots, dish out some dimes, and drain some tres. Yaddy yaddy yaddy. For fantasy, I want to focus on his defense because I want to play all opposing guards against him.

Since arriving in Minnesota, Beasley has started two games and played 29 and 32 minutes. He’s been productive in both games as well, scoring, grabbing boards, dishing out some dimes, and getting his 211 on. He could be a top 100 player.

The power forward situation in Minnesota went like this: Juancho Hernangomez got the start and played 26 minutes, contributing 15 points, 5 boards, 1 dime, and 2 tres. James Johnson played 28 minutes off the bench and provided 8 points, 7 boards, 2 tres, and 3 dimes. Juancho is younger, but Johnson has the more well-rounded game, especially on the defensive end of the floor. A situation to monitor to see which direction the Timberwolves will go.

Must’ve been licking his lips when he saw that Juancho and Johnson would be matched up against him.

It took him a while to get back into the groove after returning from injury, but he’s now playing at a top 50 level again. Will he get back to the top 35 form he was displaying earlier in the season? It’s possible.

Received the start and played 34 minutes, as Serge Ibaka was out due to illness.

In 40 minutes! Nurse, you may get sued for malpractice! Please scroll up and re-read the D’Angelo Russell blurb.

Top 35 player over the past three games, as he’s been shooting 43% from the field and dishing out 10.3 dimes. Last night’s game probably had something to do with that. On the season, Graham is a top 75 player, despite shooting 37% from the field. 3.5 tres and 7.8 dimes are what make this Graham cracker so delicious.

In 29 minutes off the bench. Didn’t get traded, which was a bummer, but Monk has still received the playing time. It looks like he’s carved out a niche as the microwave off the bench. Points, tres, and some dimes and boards should be on the prayer sheet.

Got the start but only played 23 minutes. Shrug emoji.

Thon has started the last three games and….been a top 200 player. If you need boards and blocks, wear that Thon.

The Pistons scored 76 points and lost at home to the Hornets. No more blurbs for you!!!

I love Bam so much. He’s a point center.  I hope he works on that free throw shooting and the pull-up tres when he brings the ball up the court. I just ejaculated in my pants thinking about it.

In 21 minutes off the bench. The Rockets are revolutionizing basketball by going super small. Are the Heat zagging by getting all their big men to be Magic Johnsons? I’d need to see more minutes and consistency before I buy into this Big O performance.

Top 75 player on the season despite averaging 8.4 points and shooting 39% from the field. Respect.

I guess no banana in the tailpipe. I’ve come around to Chriss and he’s fantasy viable. Top 45 player over the past six games. I feel so dirty, but he’s young, athletic, and most importantly, the team believes in him.

Damion points to Wiggins. This is my ship. I’m the captain. You hear? Look at me. LOOK AT ME!!! I’M THE CAPTAIN! Played 30 minutes.

Got the start and played 39 minutes because Deandre Ayton did not play due to a sore ankle.

Top 40 player over the past eight games. Bridges has averaged 34.1 minutes, 10.9 points, 1.4 tres, 4.6 boards, 2.8 dimes, 1.8 steals, and 1.1 blocks. He’s shooting 48% from the field and 93% from the line. That’s more than water under the Bridges. That’s an overflow of fantasy goodies. Not sure the points will be there on the regular, especially since he’s such a low usage player, but tres and defensive stats should be there.

Yawn. Only the #1 player in fantasy.

In 27 minutes off the bench. Rondo is so inconsistent. One game, he is the savior and missing piece to a title run. Sarcasm. The next night, he’s so bad that Jeannie Buss is recruiting players to come out of retirement.