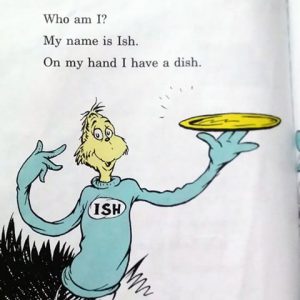 I remember reading One Fish, Two Fish, Red Fish, Blue Fish when I was a little kid. The Good Doctor was indeed a genius. I had forgotten all about the book until I had kids of my own and decided to participate in the circle of life. Always puts a smile on my face when I read it to them. Anyways, Ish Smith first made us smile back in 2014 when he played for the 76ers and flashed potential. Unfortunately, he’d disappear, then flash. Disappear, then flash, until we pushed him to the side and forgot about him. Well, he’s baaaaaaaaack. With Reggie Jackson out 6-8 weeks with an ankle injury, Ish will be taking over the reigns at point guard for the Pistons. If last night was any indication, we may not have to wish for a dish. Rather, we may get lots of swish swish.

The evil nine-game-losing-streak that was wreaking havoc in Orlando was finally eradicated with the return of the Commissioner. The good folks at Disney give thanks, as the Happiest Place on Earth was feeling the effects.

Evian. Pure. Natural. And yes, he’s got some Springs.

Who gonna sex Biyombo?! The Bizmack came out guns a blazing.

I don’t know what’s more impressive? AC Green never having sexual relations while playing in the NBA or Elf playing with that thing on his head.

A poor shooting night, but it’s encouraging that he contributed in the periphery categories. Four steals! Security!!! I was concerned that the usage rates for both Elf and Simmons would suffer when Gordon and Evian returned. It looks like all will be fine, as Vuc’s usage seems to be split evenly among the four.

Stocktonator did not forget about Dre, as it loved him last night.

With Jeff Teague out, Tyus Jones got the start and played 35 minutes.

He only put up five shot attempts. That’s probably because he stole five and was busy running away from mall security. I kid. I kid. Jones probably won’t hoist up too many shots, but he will chip in some boards, dish out some dimes, and get his crook on. He already has two games with four steals and one game with seven! Since he plays for Thibs, you know the minutes will be there.

Jimmy Butler, Andrew Wiggins, and Karl-Anthony Towns scored 20, 21, and 22 points respectively. Is that what they call the company line?

Played 34 minutes and led the Bucks in scoring. Was it “Police Appreciation Day at Dunkin’ Donuts” last night or something? There sure was a lot of thievery going on.

Played 26 minutes. Brogdon is basically Marcus Smart, if you took some of the attributes from rebounding and assists and shifted them over to the shooting percentages.

Played 33 minutes. There are some that respond to the question of, “I’ve got a problem. You down?” with questions like “what happened?” “are you okay” “what’s the problem?” Then, there are others that just respond with, “Let’s roll.” Beasley is the latter.

With Kawhi Leonard ending up sitting (and ruining countless DFS lineups), Kyle Anderson got the start and played 29 minutes.

Fitting that a Mr. Anderson would screw over so many.

Ka-Pau! A double-dub in now four straight games, with one being a triple-dub. Pau! Pau! Pau!

Played 36 minutes and led the Spurs in scoring. LMAO that I thought LMA would be a bust.

Who doesn’t get Harden excited while watching him play? If you raised your hand, you may want to go get checked for ED.

Speaking of the Celtics defense, they held the Rockets to 98 points. That was only the third time all season the Rockets have been held under 100 points. The other two times were by the Grizzlies.

What’s more impressive? Slow-mo of Neo dodging bullets or Kyrie getting his dribble on?

Please scroll back up to the Brogdon section. Thanks.

So good. I hope he doesn’t have the same career arc as his brother from another mother, Channing.

Has scored double figures in every game this month. Will also grab a nice amount of boards. Home Depot can’t wait till he retires from the NBA.

Played 24 minutes but seemed to have left the game with a finger injury. Cut it off! He’s got four more.

He should touch the ball every single possession. But, he does not. Very illogical.

His shooting is really a detriment, especially during crunch time. He gets the ball, passes it to a teammate, then just sets a screen and floats around like a ghost. Is he afraid of shooting free throws? For a player that’s the point guard of the team, he has a remarkably low usage rate. Paging Dr. Hopla. Your assistance is required. Dr. Hopla.

Looked The Process in the eyes and said, “this is what a finished product looks like.”

With Damian Lillard out, Shabazz Napier got the start and played 34 minutes.

He is so quick and has really developed his offensive repertoire. I’m sure he learned some things from Dame and CJ.